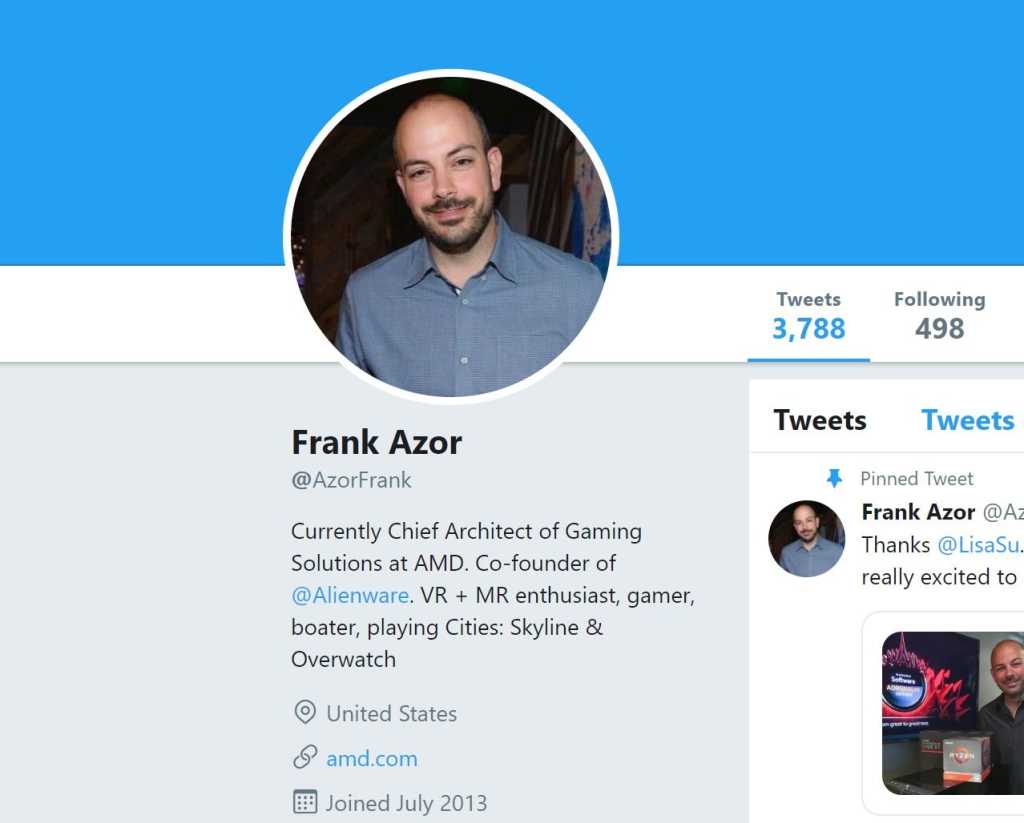 Frank Azor has made it official: The co-founder of Dell’s Alienware business has now joined AMD as its chief architect of gaming.

AMD welcomed Azor to AMD via tweets from AMD chief executive Lisa Su and other AMD employees. Azor also announced the change in his Twitter bio, where he’s known as chief architect of gaming solutions. “Thanks @LisaSu. This is a huge opportunity to grow the gaming industry! I’m really excited to be part of the @AMD family,” Azor tweeted Monday.

Azor will report to Sandeep Chennakeshu, head of AMD’s computing and graphics group, according to Moor Insights principal analyst and AMD fellow Patrick Moorhead, who penned a short article for Forbes announcing the move. Azor’s overall task is to build and expand AMD’s cross-platform presence across semi-custom, Ryzen CPU, Radeon and Instinct GPU and software products, Moorhead wrote, citing AMD. (AMD has yet to confirm this, though AMD’s corporate Twitter account linked to Moorhead’s account in Forbes.)

Azor’s hiring is a win for AMD, which has suffered through rival Intel’s hiring binge that sucked up its former graphics architect, Raja Koduri, as well as other AMD executives. Koduri’s job, among others, is to help lead the design and marketing of its Xe graphics architecture. Intel has also hired several former reporters and analysts. Azor, for his part, also brings engineering, marketing and business talent to AMD. He began as an engineer, Moorhead wrote, but later rose to prominence as one of the pioneers of gaming notebook PCs.

“AMD is doing well in gaming but can do better,” Moorhead wrote “AMD is doing great in game consoles, well in entry-level (integrated) and mid-range (card) graphics, but competition owns the premium PC gaming space and most of the profit pool. AMD has most of the cloud gaming wins, but it isn’t really a big market yet.”