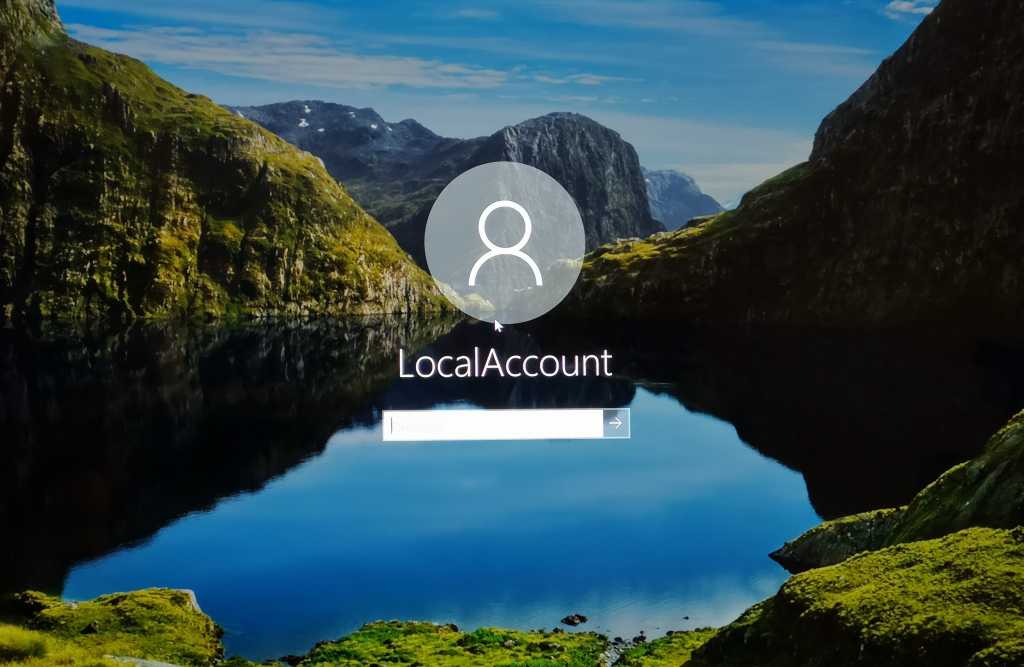 If you’re thinking about resetting your Windows PC with a local account, save yourself some frustration and consider upgrading to the Windows 10 May 2019 Update first.

Our experiences with the October 2018 Update nearly convinced us that local accounts were gone for good. They’re not, thank goodness, but Out-of-the-Box Experience (OOBE) in that version pushes you particularly hard toward using a Microsoft account. We discovered two workarounds, though, to allow you to log in as you wish.

The changes were made in what Microsoft calls the Out-of-the-Box Experience (OOBE), which you’ll see either when you receive a new PC, or when you later reset that PC to improve its performance. (Microsoft implemented the new Cortana-driven OOBE in 2017’s Creator’s Update.) Windows 10’s setup process has traditionally let you choose between configuring either a local account, which is tied to a single device, or a Microsoft account, which is cloud-based and can work with any Windows device.

Over time, Microsoft has tacitly encouraged you ever more to create a Microsoft account, but it’s never actually blocked you from creating a local one. It comes damn close in the October 2018 Update, however. Even worse, it begs you to connect your PC to the Internet—but never warns you that once you do, the local account option will never be displayed.

In the May 2019 Update, Microsoft seems to have relaxed its tactics. But only a small fraction of users, or about 6 percent, appear to have access to the friendlier version. That estimate comes from AdDuplex, which tracks versioning as part of its ad network. According to AdDuplex, about a third of Windows users remain on the October 2018 Update, also known as 1809.

What’s the difference between a local and Microsoft account?

We tend to reset PCs when we ship back review PCs back to their manufacturers. It’s worth noting that we often receive those PCs in a review state, with a local or “offline” account already enabled.

PC makers do this so we don’t have to clutter up the PC with Windows Store apps and other services if we don’t want to, preserving the PC in a “pristine” state for testing. Other fans of local accounts simply want to use a per-device password and avoid managing Microsoft’s services. Case in point: My colleague Gordon Mah Ung noticed the changes when he was setting up a new PC for testing PC components, which he typically configures with a local account to streamline the process.

Microsoft, naturally, believes that a Microsoft account is in your best interests: Your preferences, password, and files are stored in the cloud and carry over to new devices, you can manage subscriptions like Xbox Live, and you also have access to various Microsoft services. The point, however, is that the choice should be yours to make.

How Windows 10 hides the local account option in version 1809

We originally discovered the issue with an October 2018 Update (version 1809) PC. We found similar setup experiences on two different machines by different manufacturers.

During the Windows 10 (version 1809) setup process, Cortana will ask you for your language and keyboard preferences, as she always does. A few screens in, you’ll be asked to connect your PC to a local network. If your PC is already plugged into an ethernet cable (as most out-of-the-box PC instruction manuals advise) you probably won’t even see this screen. If you have a notebook PC that’s on Wi-Fi, you’ll be asked to connect to a local network.

Pay attention, though. If you’re not careful, you’ll be locked into a Microsoft account.

Let’s say that you’re in a hurry, and decline to connect to a Wi-Fi account until later. If so, you’ll see this screen, where Windows helpfully advises you to connect now, and save time later. Hey, you might think, Cortana’s making a good point here. So you connect. Once you do, you’ve basically committed to signing in with a Microsoft account.

On the next screen you see something new: “Sign in with Microsoft,” you’re told. There are no other options besides “Create Account.” Is there a local account option? There is not. Can you back out of the screen into the previous screen? No—Windows reloads the same page! Even previous tactics to “force” a local account, such as entering a nonsense email, don’t work here.

Unfortunately, even clicking the “Learn More” is an exercise in frustration. All this does is trigger a pitch for the benefits of a Microsoft account, such as OneDrive space, Office productivity apps, and more. But it also reveals that the only way to use a local account with this PC is after you’ve signed in with a Microsoft account.

You’re doomed. Or are you?

There are actually two ways out, but neither is obvious.

The first way is the “official” way to opt out of entering a Microsoft account. During the Wi-Fi sign-in page, you can opt to skip it. That leads you to the page where Cortana soulfully begs you to reconsider, reminding you that just a single click can save you precious time later on. Standing firm and clicking No will lead you to the local account page—though there’s absolutely no helpful cue to inform you as such. This may not be as insidious as Microsoft’s 2016 “click the X” debacle, but it’s close.

If you manage to be ensnared, however, don’t despair—there’s a way to wriggle free. If you’re stuck on the “Sign in with Microsoft” account page, you’ll need to turn off your PC’s Internet connection: Unplug the ethernet cord, disconnect the router, or turn off your laptop’s WiFi using an “airplane mode” key on the keyboard (if it has one). What you’re trying to do is force Windows to be unable to connect to the Internet. What worked for me then was to then try once again to create a Windows account, knowing full well that it would fail.

The goal is for the OOBE to recognize that it can’t connect to the Internet, give up, thrown an error message, and relent into giving you the local sign-in screen. After enough clicks and retries I succeeded. I then used the back arrow to return what was the Microsoft account sign-in page—except that option had vanished, and the only option was to create a local account. Victory!

A friendlier approach in version 1903

On the other hand, Microsoft’s May 2019 Update (version 1903) appears to be much, much friendlier to local accounts.

For one thing, the option to “Skip” the network configuration screen has been replaced by an  “I don’t have Internet” option. Microsoft still makes a pitch for you to sign on to a Microsoft account, but does so in a more professional manner.

If you choose to decline and “continue with a limited setup,” you can proceed directly to the local account setup.

Even better, if you do end up on the Microsoft account screen, there’s a big “Offline account” (or local account) option down in the lower left-hand corner. Hurray! That’s what we wanted all along.

Microsoft changes up little elements of Windows from time to time, even “A/B” testing some features with some users and not with others. (Generally this happens more often in the Windows 10 Insider program.) PC makers also tweak their own factory-installed builds of Windows 10. In short, Windows 10 experiences differ by user, by PC, and by the version of Windows 10 they’ve installed.

With many users still stuck on the October 2018 Update or earlier versions, it’s worth knowing that you’ll probably want to upgrade straight through to the May 2019 Update if you prefer the local account option.

Remember, Microsoft is hoping to attract a billion users to Windows 10, and it’s making money by luring them into its services and subscription model. Because a Microsoft account is the best way to do that, it’s worth keeping an eye on how Microsoft “encourages” you to sign up and use one.