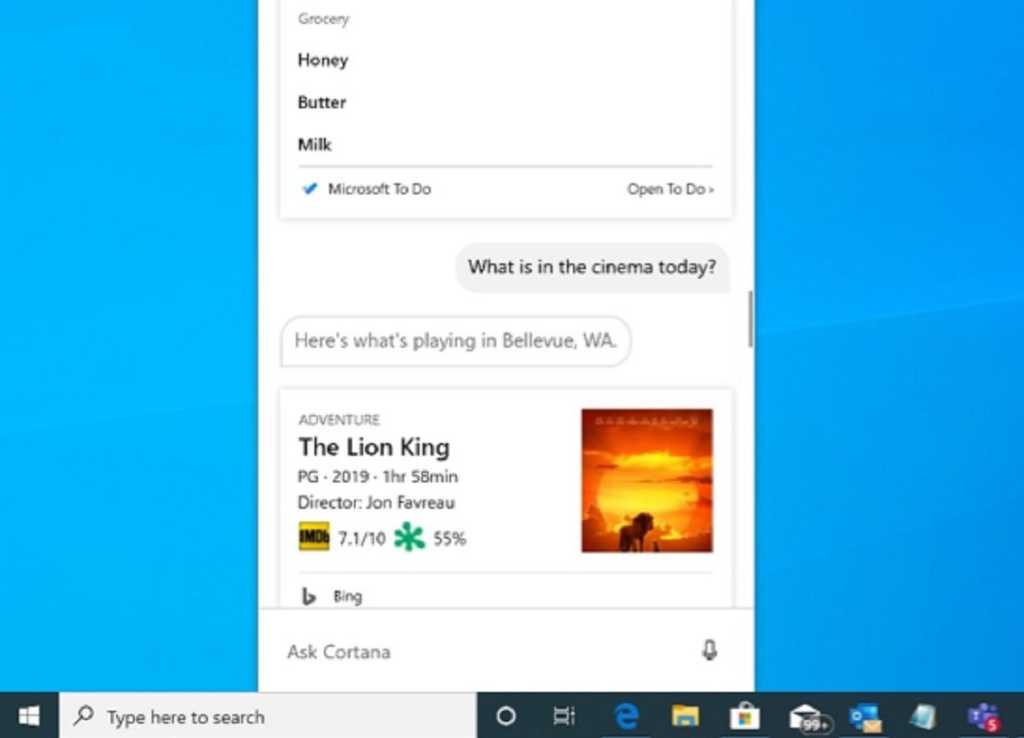 Though Microsoft may plan to remove Cortana from the Xbox home screen, the latest Insider preview build for Windows 10 doubles down on the digital assistant, with improved conversational features. Windows 10 build 18945 also makes the new File Explorer search experience available to all Windows Insiders, and adds new accessibility improvements.

Microsoft showed off a more interactive Cortana this year at Build, and it appears that Microsoft hopes to migrate Cortana to that model over time. What Microsoft calls the “new Cortana experience” will be managed by a Windows Store app, as opposed to being directly integrated within the Windows OS.

Microsoft also added additional features to build 18945, part of the 20H1 feature release due sometime early next year. (Windows 10 19H2, due around October 2019, will be oriented around bug fixes.)  Windows Subsystem for Linux (WSL) can now connect using localhost capabilities. Narrator also does a better job reading through email. A new colored text cursor will make it easier to find the cursor within large columns of text, too. Finally, Microsoft said that the new File Explorer, powered by Windows Search, is now available to all Windows Insiders.

Insiders were previously able to see the new Cortana beta app, but without being able to do too much. Now, Microsoft says that it’s pretty much fully functional, at least from its ability to manage tasks such as providing Bing-powered answers, serving as an assistant, opening apps, managing lists, and setting reminders, alarms, and timers.

In a blog post, Microsoft said that Cortana has been updated with “new speech and language models, and significantly improved performance – making it faster and more reliable than ever before.” The app also works with the voice-powered “Hey Cortana” modality, provided you have it enabled on your PC—just with a smaller, less intrusive response screen. Finally, Cortana now supports both light and dark-screen modes.

Microsoft says that they’re “slowly rolling out” the new Cortana experience to Insiders. Microsoft isn’t completely making all of the existing Cortana skills available yet, however. They’ll be added over time.

Over time, Microsoft has made a concerted effort to update the Windows user interface for those with limited accessibility. But many improvements, such as the new text cursor, benefit everybody.

The new (and optional) colored text cursor can help the cursor stand out from the sea of black and white text in Notepad or Word. All you need to do is enter the Settings, then Ease of Access>Text Cursor to enable it. Instead of a small vertical line, the new cursor will partially enclose the text character in a colored box. Microsoft warns that the text color or size might not persist from session to session due to a bug, so you may need to set it up again.

Microsoft updated its screen-reading app, Narrator, with improvements to help it parse emails sent via the Mail app or Outlook. Scan Mode will now turn on automatically, enabling the arrow keys to help users scroll through emails. Microsoft also said that email headers will now be read more efficiently. Each line will start with the status of the email, followed by the other columns.