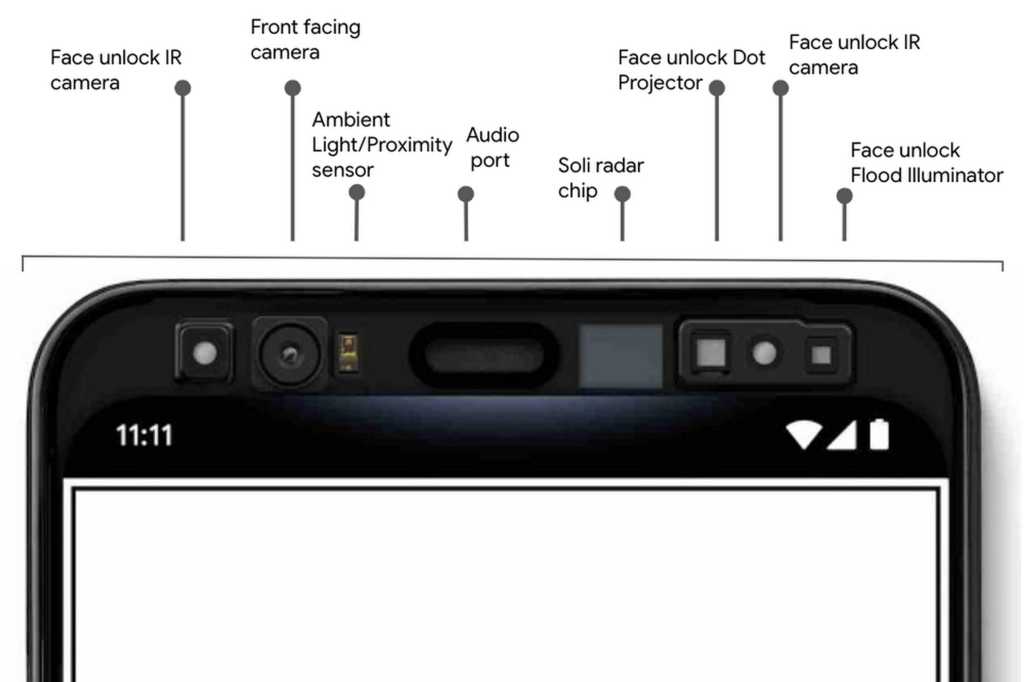 It was only about a month ago when Google shocked us by revealing the design of the Pixel 4, but it’s not done spilling details about its new phone. In a blog post, Google has outed two of the new features coming to the Pixel 4, and it confirms the biggest rumors we’ve been hearing about the device.

While the last reveal gave us a look at the back of the phone, this one gives us a look at the front. Or more specifically, the top. Google has done away with the Pixel 3 XL’s ugly notch in favor of a less-unsightly strip above the screen containing its new motion-sensing radar called Soli. And it’s a much bigger array than last year’s dual camera. From left to right, the sensors and cameras comprising Soli are as follows:

That giant array, which is spread out across the entire width of the phone, will power Google’s new Motion Sense feature, with will “allow you to skip songs, snooze alarms, and silence phone calls, just by waving your hand.” Additionally, the new sensors will allow you to securely unlock your Pixel 4 using your face.

LG offers something similar to Motion Sense called Air Motion on the G8, but the results were less than stellar. Google’s implementation is quite a bit different. As Google explains, the Pixel team has shrunk down motion-sensing radars to fit inside a smartphone, which will be able to sense “small motions around the phone, combining unique software algorithms with the advanced hardware sensor, so it can recognize gestures and detect when you’re nearby.” LG, on the other hand, uses a time-of-flight sensor to capture hand motion, a technique that delivered mixed results in our testing.

Project Soli has been an ongoing Pixel rumor for months, with several case renders seemingly revealing the existence of the new sensors. Enthusiast site 9to5Google was the first to suggest Soli would be a key feature of the Pixel 4, and recent spy shots of the device also pointed to the existence of secure face unlock.

Face unlock isn’t exactly a new feature for Android phones, but most of them use a 2D image from the front camera to scan your face. Such an implementation is easily spoofed and requires precise placement of the phone, and Google has seemingly solved both problems: “As you reach for Pixel 4, Soli proactively turns on the face unlock sensors, recognizing that you may want to unlock your phone. If the face unlock sensors and algorithms recognize you, the phone will open as you pick it up, all in one motion. Better yet, face unlock works in almost any orientation—even if you’re holding it upside down—and you can use it for secure payments and app authentication too.”

Face unlock for payments is not currently supported by Google Pay or Android Pie. it was previously revealed via Google’s last “leak” that the Pixel 4 would not have its usual rear fingerprint sensor, so secure face unlock was expected.

The Pixel 4 is expected to launch in early October, based on Google’s previous release schedule. However, if Google’s unorthodox announcement of features continues, there’s no telling when it might land.