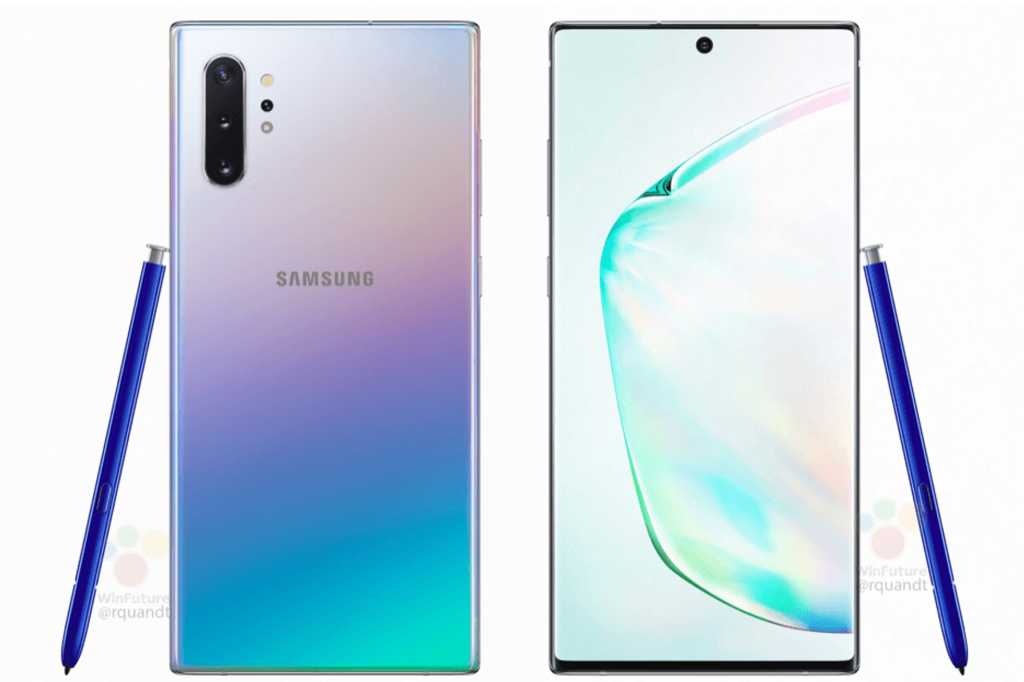 There’s still another week or so until Samsung unveils the new Galaxy Note 10, but like every year, we pretty much know everything about it already. And because many people have likely already decided whether they want one, Samsung is offering trade-in deals if you reserve one before you officially see it.

That’s good, because the Note 10 is going to be superexpensive. The current Note 9 already starts at $1,000 and tops off at $1,250. All signs suggest the Note 10 will be even more loaded, with the launch of a second, higher-tiered model this year. So a high-end model that tops $1,500 isn’t out of the question. So, let’s take a look at what you’re going to get for all that money.

Update 8/1/19: Samsung has seemingly ended its reservation trade-in program, as all phones now show “Special trade-in value revealed on 8/7” rather than actual prices.

The front of the device appears to be nearly all screen, with a sliver of bezel along the bottom and barely any at the top. Around the back, the Note 10 will dump the fingerprint sensor in favor of an in-display one, probably the same ultrasonic sensor that’s on the S10, and will move the camera array to the left corner, leaving a mostly unobstructed view of the glass back. The color scheme will likely mirror the S10’s, with various “prism” options.

But one thing it reportedly won’t have is a headphone jack. Samsung had previously resisted the urge to dump the legacy port, but the Note 10 may represent the end of an era. According to leaks, rumors, and case renders, you’ll either need a USB-C dongle or a pair of Bluetooth buds.

The Galaxy Note lineup will be nothing short of a monster, according to serial leakster Evan Blass’s breakdown:

That would make the entry level Note 10 actually smaller than the current model, which has a 6.4-inch screen. A Full HD screen would also be a lower resolution than the current Quad HD screen, and the battery would be a downgrade as well, compared to the current 4,000mAh one. Another thing the Note 10 will reportedly be missing is an SD card expansion slot, which has been a staple on Samsung’s flagship phones for years.

Note users who want the best of the best will need to upgrade to the Note 10+. It will reportedly have a whopping 6.8-inch QHD display, which is even bigger than the Galaxy S10 5G’s massive 6.7-inch screen. To power all those pixels, Samsung will reportedly be using a 4,300mAh battery in the Note 10+ as well as 12GB of RAM. While it will likely have the same 256GB of base storage as the Note 10, it will include an SD expansion slot.

Samsung’s Note phones have historically ushered in the latest camera advancements, such as dual lenses and dual aperture. However, rumors suggest that this year’s model will be very similar to the the Galaxy S10 line. As noted above, leaked specs report that the Note 10 will have the same triple-camera array that’s in the S10, adding an ultrawide lens to the dual telephoto + wide-angle setup in the Note 9. The 10+ will mirror the S10 5G, bringing a time-of-flight sensor for 3D depth and enhanced portraits.

One possible change is the addition of a third manual aperture stop. German site Winfuture claims that the new aperture system will be able to switch to f/1.8 as well as the previous f/1.5 and f/2.4, adding a little extra control for serious photographers. That probably won’t make much of a difference in day-to-day shooting, but it’s notable that Samsung is continuing to develop high-end SLR features for its smartphones.

We don’t need a rumor to know that the Note 10 will support Samsung’s Wireless Powershare, which lets you turn your phone into a wireless charger for other phones and the Galaxy Buds case. Samsung will reportedly be super-charging the feature on the Note 10. As @OnLeaks reports, the new standard will be 15W, significantly faster than the current 7.5W charging. The phone itself will reportedly feature 45W fast charging, way quicker than the 15W max speeds on the S10.

The addition of Bluetooth to the Note 9’s S Pen was more gimmicky than good, and this year’s rumored enhancement is shaping up to be more of the same. According to Winfuture, the S Pen will be gaining the ability to control the screen by hovering over objects but not actually touch them, bringing a new meaning to its Air Command menu. This could set up the Note 10 as a serious Pixel 4 competitor. Google just announced that its new handset will have a radar system that tracks your motions and lets you control your phone without touching the screen, so the new Android hotness this fall could be air gestures. Or it could just be another gimmick.

It wouldn’t be a 2019 flagship phone without a 5G option. Just like the Galaxy S10, it appears as though 5G will be limited to the top-of-the-line model, as Verizon already accidentally published its promo for the device a couple of weeks early. Of note, it says “Get it first at Verizon,” which implies some sort of exclusivity with the carrier. You’ll also apparently get a non-plus Note 10 for free with your pre-order, which is a pretty sweet deal.

You can already reserve one, sight unseen. Samsung has opened up the reservation system for “the next Galaxy,” aka the Note 10, on its website, and it’s offering some pretty enticing deals for early birds. Well it was. As discovered by trade-in site Flipsy, while Samsung is still offering $50 in credit to spend in the Samsung store, it’s seemingly ended the deep discounts it was originally offering for trade-ins. Previously you could get up to $600 off the price of the Note 10 depending on the phone you were giving up, knocking off as much as 60 percent off the price of the phone, but that program isn’t active anymore. Instead, it says “Special trade-in value revealed on 8/7.”

Assuming Samsung sticks with the same offers, however, the trade-in value is quite high. The phones bringing the highest payout ($600) are the Galaxy S10 (all models), the Galaxy Note 9, the Google Pixel 3 or 3 XL, and any iPhone that doesn’t have a home button (iPhone X and later). Those payouts are significantly higher than what Samsung offers when buying other Galaxy phones. For example, if you trade in an iPhone XR to buy an S10 5G, you’ll only get $375, while the Google Pixel 3 will net you just $250. But now we’ll have to wait until launch day to find out.