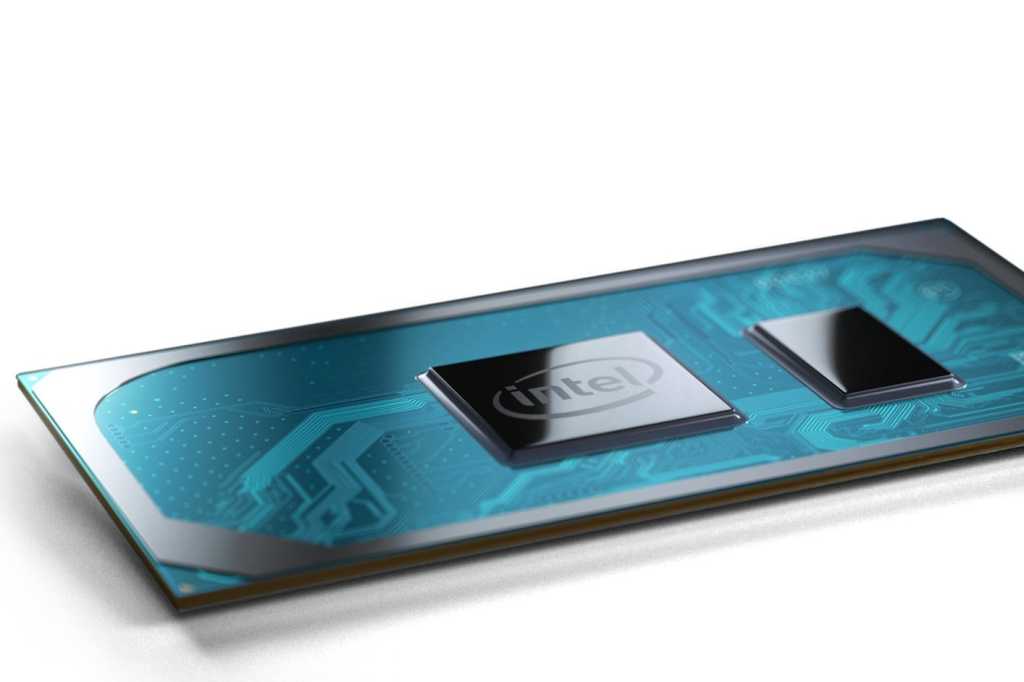 Intel began setting up Ice Lake expectations in May, positioning its first mass-market 10nm parts as improvements for the notebook PC as a whole, including AI, communications, and I/O. The overarching message is “new:” a new process technology, a new CPU core, and a new graphics engine, along with “new” advancements in communications and I/O.

Here are Intel’s mobile Ice Lake chips, in a nutshell: 11 processors, most sporting 4 cores and 8 threads, in either a 9W, 15W, or 28W power tier. Base frequencies begin at 700MHz and climb to 2.3GHz, while single-clock turbo frequencies top out at 4.1GHz. Graphics frequencies will hover right around 1GHz, with 32, 48 and 64 EUs differentiating performance. We also have real-world testing data to demonstrate how Ice Lake delivers graphic performance on a par with the lowest tier of discrete GPUs.

A bit of sticker shock, however, may affect how some perceive Ice Lake. Most 10th-gen Ice Lake base clock speeds fall short of their existing 8th-gen Whiskey Lake counterparts. Some of the new Ice Lake low-power chips offer base clocks of less than 1GHz. Versions of Ice Lake designed for tablets now consume 9 watts, rather than the 5 watts of their predecessors, Amber Lake.

Intel says that more than 35 notebooks built around Ice Lake microprocessors will be sold alongside existing Whiskey Lake and Amber Lake notebooks, beginning this holiday season. There’s still more to come: Intel’s next microprocessor disclosure will be made in the second half of August, where the “second part of our mobile family” will target “high-frequency applications” and form the foundation for Intel’s commercial offerings, said Ran Senderowitz, vice president of mobile platform marketing for Intel’s Client Computing Group.

Will that be Intel’s next-gen Tiger Lake chip, due in 2020? Or the Comet Lake chip that was part of a recent leaked roadmap? Things are getting messy.

Intel is promising to ship new products to every PC segment over the next 12 months—nothing particularly new, as product refreshes occur throughout the year. But with a mixture of 14nm and the new 10nm products co-existing in the market, things may get confusing—especially with Qualcomm’s Snapdragon 8cx and AMD’s third-gen mobile Ryzen chips also in play.

Before you can parse Intel’s new Ice Lake products, however, you’ll need to describe them—and yes, Intel has a new model number scheme, too.

Intel still offers Core i3, i5, and i7 processor families, differentiating their good-better-best status. Each Ice Lake model number also begins with a ’10’ prefix to designate its 10th-generation status.

Now, however, there are good-better-best suffixes, too: the G1, G4, and G7 descriptors signal the various tiers of graphics performance, with both the G4 and G7 tiers falling under the Intel Iris Plus branding. Also, Intel has officially done away with the U-series and Y-series labels for notebooks and tablets. Instead, the fourth digit of the model number now designates the power tier: “5” for a U-series chip, and “0” for a Y-series processor. A single 28W (or 8-tier) chip exists: the Core i7-1068G7.

Still confused? We’ve boiled it down for you, here:

Now that you know what to look for within Intel’s Ice Lake model numbers, here are the eleven new chips.

As the slide notes, all of the new Ice Lake processors will include Wi-Fi6 (Gig+) Wi-Fi and Thunderbolt 3 capabilities: four ports this time around, with two ports available on either side of the PC. We go into far more detail in our earlier discussion of the Ice Lake architecture, which is predicated on the Sunny Cove CPU design, a key feature of which is “magic”  AI inferencing using Intel’s DLBoost instructions.

We also now know that Intel’s Gen11 graphics have three different performance tiers, each with different numbers of EUs: 32, 48, and 64. (EUs are Intel’s programmable shader units, with 3D rendering, compute, programmable and fixed-function media capabilities.) Based on what we’re seeing here, Intel appears to be using the number of EUs as a performance differentiator, rather than the clock speed. Remember, Intel has previously made the claim that Ice Lake’s integrated graphics were as good as what AMD offers, keeping pace with the Ryzen 3700U on a variety of different games.

According to Senderowitz, Intel won’t be adding to the three EU graphics tiers (at least for now, we can assume). The eleven Ice Lake chips represent the entirety of Ice Lake products that Intel plans to introduce this year, he said.

Nevertheless, one of our Ice Lake performance tests shows how well Intel’s Ice Lake matches up to the downclocked Nvidia GeForce MX100 discrete GPU that was featured in a recent release of an Huawei Matebook. Intel’s claims that its Ice Lake graphics capabilities equal those of a discrete GPU seem to be borne out.

While we don’t know what Intel will be charging individual PC makers, Intel published some of its microprocessor prices as part of its ARK database on Thursday morning:

What’s interesting, though, is that the low-power (previously known as Y-series) parts consume more power, at 9W, than their 5W Amber Lake predecessors. Ultrabooks and tablets that used the Amber Lake Y-series chips were relatively few—Ultrabook Review counted just seven, of which five were 13-inches or larger. It’s not clear whether the higher power levels will end up attracting more tablet customers. Save for Dell’s announcement of its Ice Lake-based XPS 13 2-in-1, we really don’t know which notebooks will use Ice Lake, period.

The vast majority of Ice Lake chips also start out at extremely low clock speeds, yet can boost to about the levels of their Whiskey Lake counterparts. How long Ice Lake chips can remain in boost mode will help determine their performance. Again, our performance evaluation goes into more detail.

While Intel’s eighth-gen Whiskey Lake chips still emphasized performance increases versus the prior generation, those chips introduced Intel’s gigabit WiFi and two ports of Thunderbolt 3 I/O. Both have been beefed up, to gigabit+ speeds as well as four Thunderbolt ports.

Intel also enhanced its graphics quality as well as its performance, with support for three simultaneous 4K displays at 120Hz, a pair of 5K displays at 60Hz, or a single 8K30 display. The graphics engine includes three display pipes that support DisplayPort 1.4 HBR3 and HDMI 2.08, plus HDR10 and Dolby Vision.

What we’ll learn at the end of August about the next chip will also help position Ice Lake. Will that chip introduce an H-series part? Simply flesh out the top end of the “U-series” lineup with a Core i9 offering? Introduce an entirely new lineup? Based on what Senderowitz said about the entirety of the Ice Lake product line, we’d opt for the latter. Apparently the Core i7-1068G7 doesn’t necessarily represent the high end of Intel’s Core offerings for 2019. A six-core, twelve-thread processor almost certainly is in Intel’s future, too.

Remember, Ice Lake represents Intel’s first mass-market 10nm processor and its first major redesign in several generations. Even though Intel shipped its first 10nm Cannon Lake chip, the Core i3-8121U, in May 2018, it probably never exceeded extremely low volumes. It’s fair to say, then, that Intel has significant latitude to refine the 10nm process and push up future clock speeds.

“I think that you will be able to see how we optimize the workloads…for more segmented and more targeted designs to meet customer needs,” Senderowitz said of what you can expect of Intel’s future processor positioning.

For now, however, Intel’s betting big on Ice Lake, and you should see numerous thin-and-light and notebook designs built around Intel’s Ice Lake processors this holiday season. Remember, too, that those will include ”Project Athena” designs: flashy “halo” notebooks similar to HP’s Spectre Folio, that try to accomplish bold new things with the next-generation ultrabook form factor.

If you’re in the market for a notebook PC this holiday season, though, we can already say that you’ll benefit immensely from knowing what you’re buying. We see 2nd- and a few 3rd-gen Ryzen notebooks crowding the low end of the notebook PC market, alongside the 7th- and 8th-gen Core chips that will give way to Ice Lake and its future, faster, cousins. Qualcomm claims that its Snapdragon 8cx offers Core i5-class performance, too.

All of that competition can create confusion. But you, as a customer, will ultimately benefit.

This story was updated at 9:37 AM to include Intel’s published processor prices for its 10th-gen Core, Ice Lake chips.