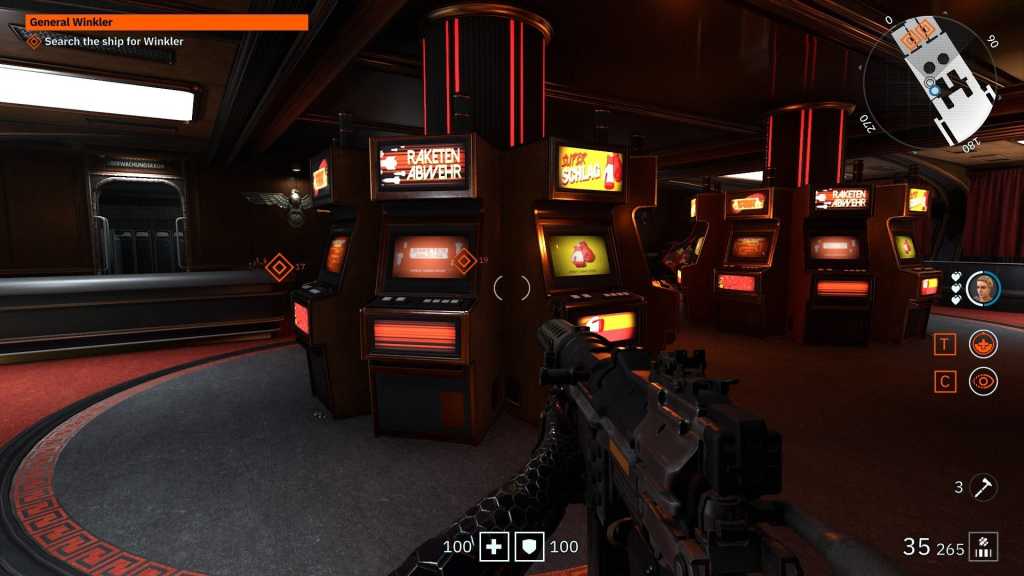 Wolfenstein: Youngblood is so much weirder than I anticipated. Everything I’d seen up until release indicated this was a mirror to Wolfenstein: The Old Blood—meaning bigger than DLC, smaller than a full-scale sequel, much weirder and with a storyline that borders on non-canonical. And, of course, it would play like Wolfenstein. Co-op Wolfenstein, sure. That would be the novelty here, and maybe some new weapons to go along with the 1980s theme.

I expected filler though.

Youngblood is more ambitious than that, for better and for worse. This is by no means Wolfenstein 2.5 or whatever. Instead it’s like a dungeon crawler wearing Wolfenstein’s skin. I can’t say I prefer it over mainline Wolfenstein, but…there’s something here. Maybe.

Note, I’m not finished with Youngblood yet. I’ve played for about two hours so far, just long enough to reach the point where it “opens up.”

That statement alone should indicate what a departure Youngblood is though. Both Wolfenstein: The New Order and sequel The New Colossus are fairly straightforward (yet excellent) shooters. Blending modern level design with the secret-packed corridors of classic Wolfenstein made for creative and often maze-like environs, but at the end of the day you pretty much storm the level, kill every Nazi, plow forward to the end, and then move onto the next.

Youngblood starts in that mold, with a mission where you storm a Nazi zeppelin and kill the presiding general. Once completed though, you make your way to Paris’s catacombs—and then it turns into an open-world game, of sorts. Not quite, as Paris is broken up into a bunch of smaller maps, but you’re free to explore them in any order really, and tackle any mission your Resistance compatriots give you.

Or rather, you can tackle the ones you’re strong enough to survive. That’s another massive change: Youngblood includes enemy levels, complete with visible health bars. It’s Destiny, or The Division 2, or maybe Assassin’s Creed. Not all the way, mind—there are no alternate weapons to pick up, no armor pieces to equip. You aren’t hunting for kneepads or whatever.

You will encounter enemies who are bullet-sponges though. The first boss, the aforementioned zeppelin general, is particularly painful. I felt like I shot him for five minutes before he finally went down, and there’s barely any feedback to it. You just keep shooting and shooting and shooting—not knocking armor off or any of the aspects I associate with modern Wolfenstein, but simply whittling down a red bar until it’s gone.

But Youngblood feels like an entirely different series, at least when it comes to combat. If you’re expecting a snappy time-to-kill, it’s not here. Worse, if you enjoyed sneaking in the last two Wolfenstein games as I did, that route is almost impossible here. You can cloak at any time, which is a neat touch, but there’s not nearly enough indication whether stealth kills or headshots will actually take out enemies, meaning I’ve mostly stormed through guns blazing.

That route is fraught with danger too though, as Youngblood played solo is essentially one long escort mission. You choose one of BJ Blaskowicz’s daughters to play as, either Jess or Soph. The other is controlled by the AI, unless you either 1) bring a friend along or 2) are lucky enough to have another semi-competent player drop in. I left my own session open for the two hours I played and in all that time, one person joined and then immediately dropped back out. Not very promising.

Solo it is then, and like most co-op games with an AI partner, the other sister is dumb as rocks. She walks in front of you while you’re shooting. She stands in the open and takes a million shots, then begs for you to revive her. She forgets to follow you downstairs, making you wait to open a door for upwards of 20 or 30 seconds at times.

I imagine Wolfenstein: Youngblood would be more fun with a partner. Alone, it’s playable but needlessly frustrating—especially since you and your sister share lives. You can have three maximum, and if you run out it forces you to start the map over again. If you go down and your AI partner is too busy shooting in the air to notice? Well, there goes one life. If she’s downed while surrounded by enemies, which happens all the time? There goes another.

If you’ve ever played Borderlands solo, you’ve experienced this same frustration. I highly recommend finding a friend and splitting Youngblood’s deluxe version. It costs $10 more but you’ll only need one copy of the game between the two of you.

And despite everything, I do recommend finding a friend and playing it—I think. Again, I haven’t finished Youngblood and I haven’t been won over by its RPG-like combat. I don’t hate it though either. Once you’ve flipped the switch in your head, internalized that this is more Destiny with a Wolfenstein skin, it can be good mindless fun.

The story is also great so far. That’s the part I care about most in these Wolfenstein games, to be honest, and I’ve really come to like Jess and Soph. The intro, with old-man BJ trying to teach his daughter to hunt, made me miss him. But with BJ out of the picture for the time being, Jess and Soph have come into their own. They’re just two surly teens in way over their heads, swearing and throwing up and having one hell of an adventure. I’ll be happy to rejoin BJ in an eventual Wolfenstein III, but Youngblood is a great departure and a huge step up from the half-assed B-movie antics of Old Blood.

Is Wolfenstein: Youngblood for everyone? Absolutely not. If Wolfenstein-but-an-RPG is too much cognitive dissonance for you to get over, then don’t bother. I definitely struggled for the first hour or so, and even now I find higher-level enemies and the bosses in particular to be a chore. I wanted Wolfenstein to be more like Doom going forward, not more like The Division, and I certainly hope this is a one-off experiment.

But if you accept it as an experiment, and you’re willing to meet it on its own terms? Youngblood might not become your favorite, but a lot of what I like about Wolfenstein remains intact. The environments are beautifully detailed, with tons of bastardized (Nazified) nods to ‘80s pop culture, including a hilarious knockoff of Prince that makes me laugh every time I see it. The story’s entertaining as well, and I plan to see it through to the end despite the bits I don’t love.

In that respect, at least, it’s very similar to Wolfenstein II.