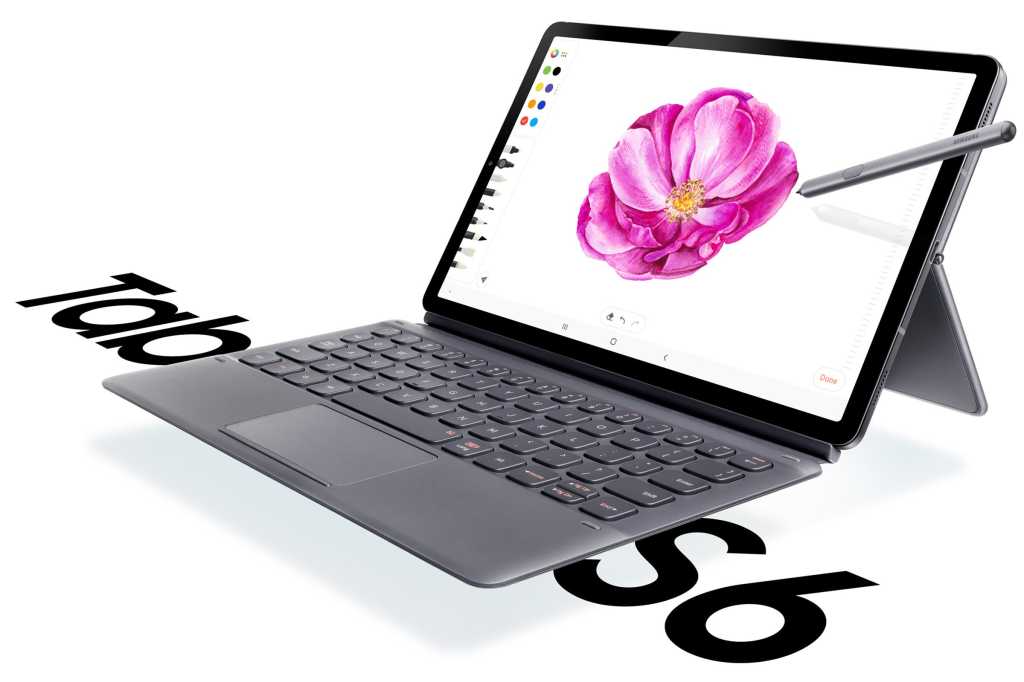 Unpacked isn’t until next week, but Samsung can hardly wait to show us all of the new things it’s been working on. Ahead of the big show, Samsung has taken the wraps off the Galaxy Tab S6, a high-end Android tablet aimed at competing with Apple’s iPad Pro and featuring top-of-the-line specs, a Bluetooth S Pen, and the first in-display fingerprint sensor on a tablet.

After launching the affordable Galaxy Tab S5e earlier this year, Samsung has skipped right to version 6 for its new premium tablet. Design-wise, it looks a lot like the Galaxy S4 that it replaces, with slim, uniform bezels all around and a wide 16:10 aspect ratio. You’ll also notice that there isn’t a headphone jack this time around, helping Samsung trim 1.4mm from the thickness. Here’s how the Galaxy Tab S6 stacks up to its predecessor:

The biggest changes other than the speed is with the S Pen. The Galaxy Tab S6 gains the Bluetooth stylus that was introduced with the Galaxy Note 9 that lets you remotely control apps and actions, as well as some new tricks. S Pen Air Action will allow you to control your tablet with hand gestures, a feature that has also been rumored for the Note 10. Samsung says you’ll be able to “take selfies and videos, or scroll through multimedia content, even when the tablet is out of reach.” It’s also magnetic, so you’ll be able to keep it attached to the back of your Tab S6.

There’s also a new version of Samsung’s DeX PC-like desktop experience. You can either connect your Tab S6 to another display via an HDMI-to-USB-C cable or pop it into the BookCover keyboard to enter the DeX interface, which features resizable windows and a Chrome OS-like dock. Speaking of the keyboard, the $180 accessory has gotten a complete overhaul, bringing a trackpad, extra function keys, and a less-compact design.

The 7,040mAh battery is actually smaller than the 7,300mAh one in the S4, but Samsung still promises 15 hours off battery life, just an hour less than the 16-hour Tab S4.

One thing you won’t find on the Galaxy Tab S6 is a physical fingerprint scanner. Nor does it have an iris scanner like the S4. Instead, Samsung has added an onscreen optical fingerprint scanner at the bottom of the display for unlocking. It’s the first in-display scanner in a tablet, but if it’s anything like the ones in our phones, it won’t be nearly as instant or convenient as Samsung promises.

Whether the Galaxy Tab S6 can compete with Apple’s iPad Pro remains to be seen, but I wouldn’t hold my breath. Samsung may have built a tablet that’s as fast and capable as the iPad Pro, but it’s still going to have a hard time competing with Apple on software. From the app ecosystem to the OS, Apple runs circles around Samsung and Android when it comes to tablets, and the gap is only going to get wider as iPad OS 13 matures.