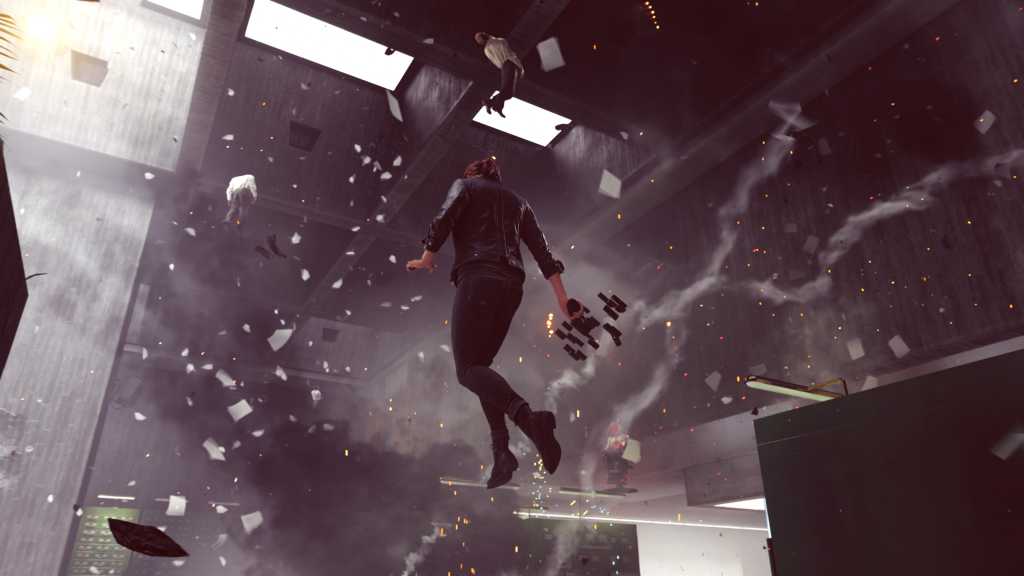 So what does the fall have in store? Not that much actually. With a year until the new console launches, we seem to be in sort-of a mopping up phase—and most of the remaining titles of note are slated for next spring, if we’re honest. Looking at you, Dying Light II and Cyberpunk 2077.

Still, there are a few noteworthy games to look forward to in the coming months. We’ve listed nine of our most anticipated below.

Having recently read the Southern Reach Trilogy, I’m starting to realize how much of Remedy’s Control is an homage. Hell, even the title comes from the name of a character in Jeff VanderMeer’s series.

And I’m totally fine with that. Control’s brutalist Oldest House, headquarters of the titular Federal Bureau of Control, looks like a warren of weird—a boring government office where you might accidentally stumble into a never-ending labyrinth, or a lab being slowly devoured by wildlife. It’s peak Remedy, and a perfect (albeit unofficial) adaptation of New Weird hallmarks.

This Blair Witch adaptation (two decades after the fact) makes the list based on pedigree, not anything I’ve seen of the game itself—because truth be told, I haven’t seen much. Just the E3 trailer.

It’s being developed by Bloober Team though, the studio behind Layers of Fear and Observer. Bloober’s one of the most interesting teams working in horror these days, and that alone is enough to pique my interest. Then again, I mostly love Bloober’s work because it’s strange and innovative, breaking established horror rules. Can that spirit survive when shackled to a known quantity like Blair Witch? We’ll find out soon, I guess.

Like the Crash Bandicoot remasters, Activision’s Spyro remakes are coming to PC a year after they initially debuted on consoles, and I am excited. Crash Bandicoot was an excellent nostalgia trip, but I don’t think the games have aged very well. Spyro is some top-tier ‘90s mascot platforming though, and I’m thrilled to get to play them again with the cruft scraped away.

Modernized controls are an especially welcome touch, and should make those flying sections less of a pain.

This might be Destiny 2’s moment—two years after its initial release, and a divorce between Bungie and Activision. The road here’s been messy, to say the least.

But the upcoming Shadowkeep expansion is set to turn Destiny 2 into the game fans wanted from the start. A new armor slot, a new raid, Eververse changes, and a long-awaited return to the Moon—it’s good news, all the way down. Plus Bungie’s moving Destiny 2 from Battle.net to Steam and making the base game free-to-play to drum up new players. Best of all? You’ll be able to transfer characters between platforms, so everyone who originally bought Destiny 2 on PlayStation 4 and has felt trapped there these last two years can finally move to PC. (Or vice versa, I suppose.)

Call of Duty’s been in a weird place the past few years. First Sledgehammer tried to resurrect the World War II glory days. Then we got a Black Ops sequel that…had very little to do with Black Ops, and scuttled its campaign to capitalize on the battle royale trend.

For 2019, it’s a Modern Warfare reboot. Infinity Ward is hoping to bring back the ripped-from-the-headlines vibe of the original Modern Warfare trilogy, hoping to figure out what a nuclear explosion or a “No Russian” looks like in 2019. Will it succeed? I’m not sure. It’s easy to feel tacky or exploitative with such loaded subject matter. That said, it’s a lot more interesting than what we’ve seen from Call of Duty for the last decade or so, and that’s promising in itself.

Perhaps my most anticipated game of 2019, Outer Worlds is Obsidian’s spiritual successor to Fallout: New Vegas. Like, way more than I expected. It’s evident in the setting, which takes Fallout’s retro-futurist look to space. But mostly it’s the minute details, the way the camera zooms in for conversations or the cheeky tone for character upgrades.

If you’ve ever wished for a New Vegas sequel, this is probably the closest you’ll get. Fingers crossed it works a bit better at release though.

If Outer Worlds isn’t my most anticipated game, then it’s Planet Zoo. Frontier’s poised to do again for Zoo Tycoon what Planet Coaster did for Rollercoaster Tycoon, modernizing a classic series while doubling down on the creative aspects of park construction.

Sure, you could just let the lions loose on your unsuspecting customers—and I suspect plenty of you will. Planet Zoo looks like a fantastic simulation as well though, forcing prospective park designers to carefully weigh space allotments, terrain, entertainment for the animals, food prep, and more. I can’t wait to sink time into it, and I’m even more excited to see what happens when the Steam Workshop starts filling out.

Respawn’s Jedi: Fallen Order had one of the worst demos at E3. Slow and uninspired, it looked like another mediocre Star Wars game in the Force Unleashed mold.

But it’s not. As more details filtered out, my interest in Fallen Order grew. Respawn says it’s more open than the on-rails demo we saw would indicate, an adventure game more than an action game. And some features sound downright experimental, with real-time space travel and a Sekiro-like poise bar that forces more deliberate lightsaber combat against the higher-tier enemies.

Why was none of that highlighted in the E3 demo? We may never know, but Jedi: Fallen Order seems like it’ll be a lot more interesting than you might’ve expected.

The last major release of 2019 is also maybe the best way to end 2019. Doom Eternal promises to be more Doom and…that’s about it.

And that’s enough, yeah? Doom Eternal doubles down on the resource management of the original, rewarding aggression with more health and more ammo, a vicious circle that made its predecessor incredibly satisfying to play. After a few years off, I’m excited to get back to demon-slaying.

I’m also surprisingly interested in seeing where the story goes as well. 2016’s Doom was mostly dumb, but its satire of corporate politicking had hidden depths if you chose to pause the action and go looking for them. It was a refreshing tonal shift after the ultra-grim vibe of Doom 3, and I’m curious where it goes from here, even if it’s not the main draw.