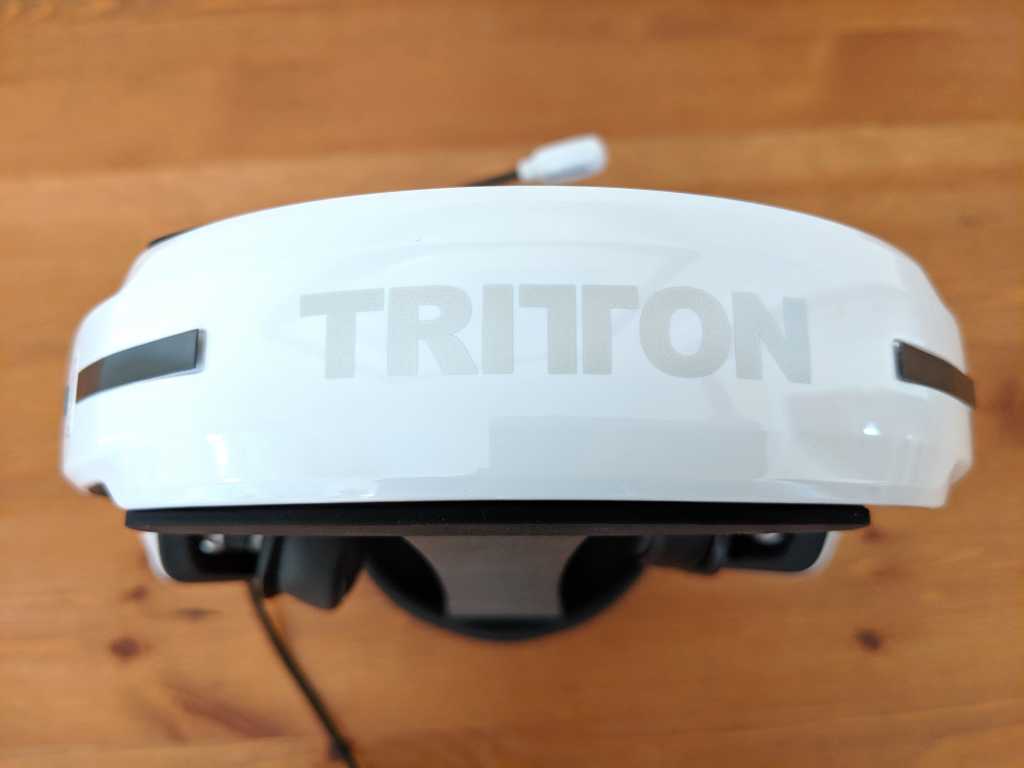 Tritton’s Kunai Pro is one of the best-sounding entry-level headsets you’ll find, but it feels like a stiff wind might snap it in half.

The budget-friendly end of the headset market must be a bloodbath these days. First HyperX tried making inroads with the $50 Cloud Stinger, then Astro dipped in with the Astro A10. With all these mainstream companies vying for entry-level dominance, it’s harder than ever to stand out.

Tritton tries to do just that with the $50 Kunai Pro headset though. It’s certainly cheap enough—but does it have the features to stand toe-to-toe with Astro? We went hands-on to find out.

This review is part of our ongoing roundup of the best gaming headsets. Go there for information on competing products and how we tested them.

The Tritton Kunai Pro looks like a headset made for (or from) Stormtroopers. Even the shape looks vaguely reminiscent of the famed Imperial armor, though mostly it’s the way the glossy white plastic shell contrasts with the black foam padding. In any case, you could tell me this was a licensed product and I’d believe it.

The look is rather more impressive than the reality though. Listen, the Kunai Pro is cheap. $50 is cheap. Thus it might feel weird to knock it for feeling cheap—but it does. It feels flimsy, like a toy, light enough to snap in half. And before you accuse me of picking on the Kunai Pro, note that I leveled the same complaints against Turtle Beach’s budget Atlas One headset earlier this year.

It’s hard, putting out a cheap headset that feels expensive. The market is crowded, though, and that’s what you have to do. Astro’s A10 is ugly, but it feels rugged and durable. The same goes for the aforementioned Cloud Stinger. And Razer’s new Kraken X is the same price as the Kunai Pro, but looks (and mostly feels, from my early tests) identical to the higher-priced Kraken models.

Here’s the not-so-secret: People want cheap, but people don’t want to feel cheap. The Kunai Pro looks decent, but it feels like a bargain-bin headset, and that’s a terrible first impression. It puts the Kunai Pro at an immediate disadvantage, even if the money saved on materials went into creating a more robust sound under the hood.

Did it? We’ll get into that later.

In any case, the lightweight design does have the side benefit of being fairly comfortable. The earcups are a bit small, but the fit is gentle enough you could easily wear the Kunai Pro for a full day without any tension or pain—always important.

The microphone is also removable, which is a nice touch at this price point. I like that it locks into place as well, requiring a twist and a fair amount of force to be pulled out. You won’t accidentally yank it, though it’s cumbersome enough I don’t know how often you’ll actually remove it.

And Tritton’s included some basic controls, albeit on an in-line control box and not on the headset itself. I also feel like there must’ve been a change halfway through the Kunai Pro’s development, because nothing about this control box’s layout makes sense. Here, see if you can spot the problem:

No? Well, half the control box is arrayed for the person using the headset, which makes perfect sense. There’s a mic mute button in the top-left and a button to cycle between various audio modes in the bottom-left, and the text or symbols connoting these functions is “upside-down,” insofar as it faces up toward the user.

The volume controls are the opposite direction though. If you look at the Kunai Pro control box the way the rest of the symbols indicate, then the Volume Up button is at the bottom, and vice versa.

It’s a minor issue, one that won’t affect you once you’ve gotten used to the Kunai Pro—but it does seem a bit odd.

The Kunai Pro feels every bit the $50 headset. Still, I was ready to be wowed when I put them on. “Don’t judge a headset by its chassis” and all that, right?

And I’m glad I gave it a shot, because the Kunai Pro sounds much better than I expected. Sure, you won’t mistake it for a high-end set of studio cans, but for $50? I think you’d be impressed. I certainly was.

Not just in-game, either. If there’s any application where budget headsets typically struggle, it’s music. The Kunai Pro actually won me over with a surprisingly wide stereo mix that gives instruments lots of room to breathe. Vocals sound especially rich and prominent, thanks to a significant bump in the mid-range. It’s less accurate, but lively.

Bass presence is the Kunai Pro’s primary weak spot, which is surprising, because cheap headsets usually layer on the low end to mask more substantial problems. The Kunai Pro has the opposite issue, with thin bass—and worse, a tendency for the drivers to rattle in more intense low-end tests.

There’s also an issue with interference, maybe due to a poorly-shielded cable. Whatever the reason, if I don the Kunai Pro while nothing’s playing I can hear white noise hissing. It’s drowned out by literally any noise through the headphones, but shouldn’t happen in the first place. Any fade-ins or fade-outs also have a layer of static over top.

Still, at this price? The Kunai Pro is one of the better headsets I’ve heard, definitely up there with Astro’s A10. Astro has better bass response, but the Kunai Pro has a wider and more natural sound that shines when listening to complex music tracks.

The Kunai Pro also has software-simulated surround sound, a rarity at this price. Like, extremely rare. The Astro A10 has no surround sound solution, nor does the HyperX Cloud Stinger.

Tritton packages Dirac 3D Audio into the Kunai Pro, toggled by a button on the control box. A word of warning: I found it very hard to track down Tritton’s software once I’d thrown the box out, and finally did so by clicking the “User Manual” listing on Amazon, which then directed me to a sketchy-looking OneDrive directory. No, seriously.

Once I had the drivers though, I was able to mess with Dirac 3D. Like most software 7.1, it tends to make stereo mixes sound hollow and dull. Better to leave it off. In-game, it’s marginally better. I was never really wowed by it, but there is marginally more directionality than you get from the raw stereo mix—though I still couldn’t shake the feeling it was messing with the EQ settings every time I activated it. The processed 7.1 sound always felt a lot brighter than the unprocessed, a lot more treble-heavy, for better or worse.

For the price, the Tritton Kunai Pro is probably the best-sounding headset you can buy. If you’re looking for an entry-level option and absolutely can’t spend more than $50 then it’s definitely worth checking out, and provides some stiff competition to our site favorite, Astro’s A10.

That said, I’m worried about durability. Really worried, and that’s what prevents me from wholeheartedly recommending the Kunai Pro. The first time I saw the A10, I remember the person demoing took the headset and smashed it into the concrete floor to prove its durability. By contrast, the Kunai Pro feels like a stiff breeze might snap it in half.

Skimping on materials allowed Trtitton to splurge on sound, but that’s little consolation if your headset doesn’t last more than a few months. It’s hard to know just how fragile the Kunai Pro is, but I’d rather not have to worry about it.