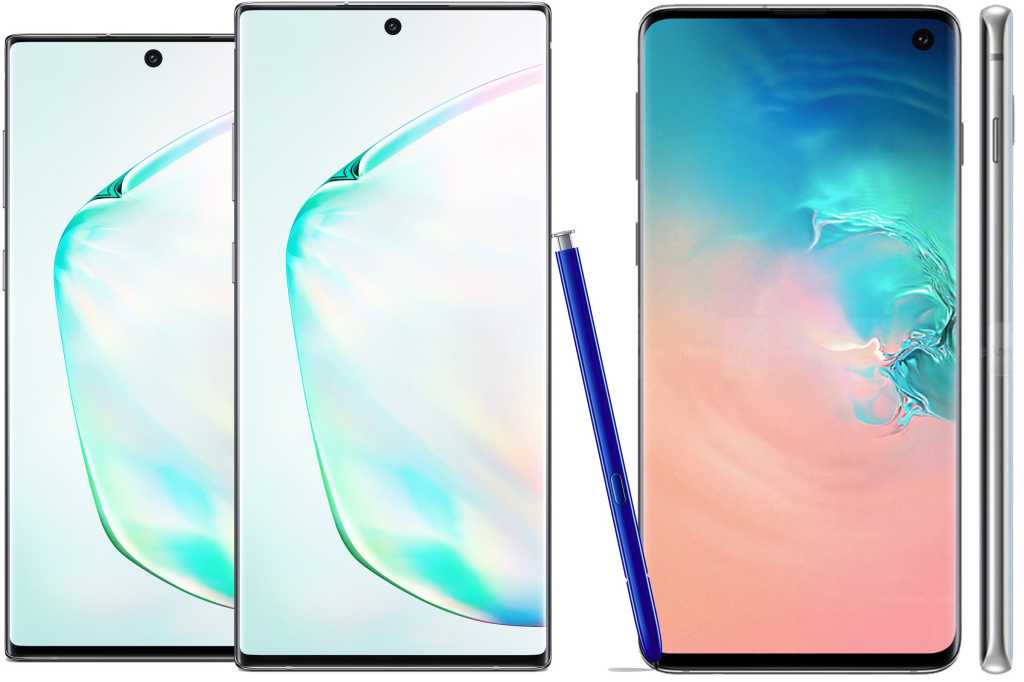 The decision to buy the newest Note usually comes down to one main question: Do you want an S Pen? But with a second model joining the fray this year, the decision to buy a Note over a Galaxy S isn’t such an easy one. So we’ve broken it all down for you.

Samsung has always used the Note 10 as the launching pad for its best and biggest displays. The Note 10 does that with the new plus model:

One of these things is not like the other, and it’s the smaller Note 10. Not only is the size a tenth of an inch smaller than the S10+ and last year’s Note 9, it’s also much lower-resolution, with Samsung significantly paring down the pixels to reach 1080p. So the sweet spot here is the 6.4-inch S10+, but if you want the best of the best, the 6.8-inch Note 10+ is the way to go.

If you liked the near-bezel-less design of the Galaxy S10, you’re going to love the Note 10. Samsung has dramatically trimmed the bezels as compared to the Note 9 and even outdid the S10, with the thinnest strips of black over and below the display. As such, there’s no room for a camera, so the Infinity-O “hole-punch” design makes an appearance here too. Samsung has opted to center the camera rather than push it off to the right like on the S10, however, giving the Note 10 a cleaner, more symmetrical look.

The slimmer bezels along with a slightly smaller display means the Note 10 is decidedly smaller than the S10+ as well, a rare claim to fame for Samsung’s phablet:

The 6.8-inch Note 10+ is obviously the biggest of the bunch here, but with a screen that’s nearly a half-inch larger than the S10+, it’s surprisingly compact. So if you want a phone with the maximum screen-to-body ratio, the Note 10 is the clear winner.

As far as colors go, the S10 has a super-cool “prism” color scheme with iridescent shades of white, black, blue, or green, while the Note 10 has more traditional white or black, along with blue that’s exclusive to Best Buy and Samsung.com. Our favorite of them all is the Note 10’s Aura Glow option, which turns the back of your phone into an ever-changing rainbow that you absolutely won’t want to cover up with a case.

All four phones use the same Qualcomm Snapdragon 855 processor, so performance should be roughly the same across the board. As far as RAM goes, both the Note 10 and the S10 have 8GB standard, but the Note 10+ bumps the base RAM to 12GB. To get that much RAM in the S10+, you’ll need to jump to the 1TB Performance Edition ceramic version, which costs a whopping $1,600. So the Note 10+ offers the best performance value, though most users will be plenty happy with “just” 8GB of memory.

Samsung always delivers excellent battery life in its flagship phones. Each phone will easily get you through a day of heavy use, despite having slightly different capacities:

All four phones include Samsung’s Wireless PowerShare features, which lets you charge another phone or a pair of Galaxy Buds by resting it on the back. They also all feature 25W fast charging, which will fill up your phone up in a little over an hour. Only the Note 10+ has Super fast charging at 45W, which is just crazy.

Here’s where things start to get a little confusing. Samsung has doubled the base storage of the Note 10 yet again, while eliminating some of the options we were used to:

What’s more, Samsung has eliminated the MicroSD card slot from the Note 10, so the only option there is 256GB. The Note 10+ still supports expandable memory, but you can’t get a terabyte inside like you can with the S10+. So, if storage matters, the S10 offers the better options.

The cameras on all four phones feature the same three main lenses that’s you’ll use the majority of the time:

Judging by our testing with the S10, the camera in the Note 10 will be among the best you can get in a smartphone. The Note 10 also brings an improved editing app, though we assume that’ll eventually make its way to the S10 as well.

The Note 10+ brings a fourth depth-sensing lens, which “detects and measures distances between the camera and the subject” for crisper portraits and more accurate AR. But whichever phone you choose will give you a mostly uniform photography experience.

As always, the Note 10 includes an S Pen, and the Galaxy S doesn’t. There are a few new stylus tricks on the Note 10, including “air” gestures that let you control apps by waving and improved handwriting-to-text translation, but it basically boils down to whether you want to write on your phone’s screen.

When it comes to ports, there’s a new twist. The Galaxy S10 has a headphone jack and the Note 10 does not. We’ll repeat that: The Note 10 does not include a headphone jack. Nor does it include a USB-C-to-3.5mm dongle in the box, so you’re going to have to buy one if you want to use a pair of old-fashioned headphones. Samsung is, however, including a pair of AKG USB-C buds in the box and, of course, you can use Bluetooth headphones as well. But if you don’t want to worry about whether the earphones you’re carrying will work, the S10 is the phone you want.

None of these phones is cheap, but the Note 10+ truly tips the scales:

There are two ways of looking at this. On the one hand, there’s only $200 separating the 6.1-inch Galaxy S10 from the 6.8-inch Galaxy Note 10+, which makes it seem like a downright bargain. On the other, the Note 10 is a bit overpriced at $950. Believe it or now, the sweet spot of these ridiculously expensive phones is the thousand-dollar S10+, and as long as you don’t need as S Pen, that’s the phone we’d recommend.

If money isn’t an object, the Note 10+ is easily the best smartphone you can buy, despite its lack of a headphone jack. Its display is gorgeous, it has a fantastic camera, and it looks great. If you can’t bring yourself to spend $1,100 on a phone, the S10+ is an awesome alternative, especially if you don’t case about the S Pen.

We can’t really see a reason to buy the smaller Note 10. It has a lower-resolution display than any of the phones here, no expandable memory slot, and no headphone jack. Either the S10 or S10+ is a better option.