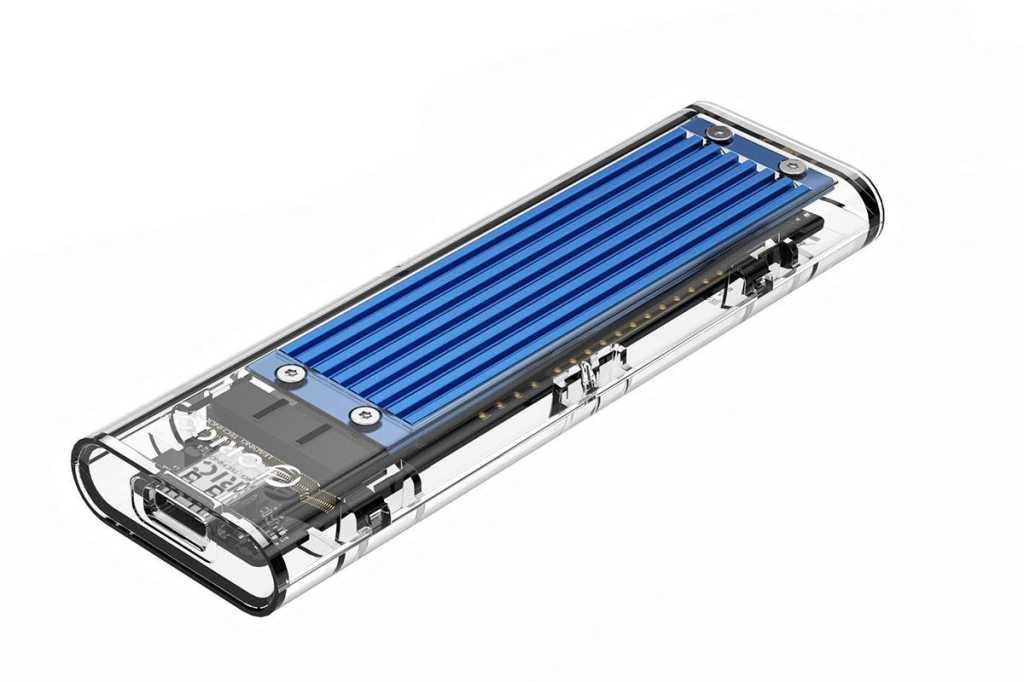 While not as classy as the Fledging Shell, this NVMe/M.2 enclosure is lighter and about half the price for the same performance. The snap-together design seems stable, but could pop apart in a mix with other items or when dropped. Still, a nice cheap way to add fast USB external storage to your system. Just don’t expect internal NVMe type numbers.

Orico’s M.2 NVMe USB 3.1 enclosure is fast, easy to assemble, and if you like your inner technology visible—quite handsome. It’s also half the price of the Fledging Shell I’ll be comparing it to. Sounds great. Is it?

Clearly, transparent/see-through is a thing with Orico (pun intended), as you’ll see if you visit the Orico website. I’m not a huge fan of revealing a product’s innards, nor am I dead-set against it. It’s simply a matter of taste. Coupled with the anodized blue heat sink, I think the product works pretty well visually in this case. The top half/cover slides back slightly and decouples so you can access the internals.

The product is pretty simple on the part level: a PC board featuring a JMicron JMS583 controller with a M.2 slot inside clear plastic, with a USB Type-C port on one end. The drive comes with both a Type-C to Type-C cable, and a Type-A to Type-C cable.

Orico includes a brass mount, which fits under the PCB. The PCB has a hole through which you attach the SSD. They marry at a slight angle, with the SSD pressed ever so slightly against the heat sink—which I’m guessing is the reason. Once the cover is back on, you’ll never notice.

The cover does come off with a slight amount of pressure. I never had it detach in my backpack, but it will pop off easily if you drop the unit, as I did intentionally and you might do inadvertently.

The Orico, with a 1TB Samsung 970 EVO Plus installed inside, pretty much aced the performance tests. The synthetic benchmarks pegged sustained transfers at around 1GBps, and our 48GB single file read test around 700MBps. Not surprisingly, given that both drives use the same JMicron controller, the Orico finished in a virtual tie with the Fledging Shell in the CrystalDiskMark synthetic test. We adjusted for the slightly slower 512GB 970 EVO with less cache that was inside the Fledging Shell.

You’ll see that the Orico was a bit better in our real-world 48GB copy test, but that’s almost entirely because it had a faster SSD with more cache inside.

Seek times were nearly identical, and considerably faster than what you’ll get with a SATA-based USB 3.1 Gen 2 (10Gbps) SSD.

The Orico enclosure’s heat sink was quite hot to the touch after a stint of sustained writing. Not hot enough to burn, but hot enough to make you take notice. That’s, of course, the purpose of the heat sink, but the fan on the Fledging Shell provides a much cooler-in-the-palm experience.

As you may have noticed, NVMe over USB 3.1 Gen 2 (10Gbps) performance is hardly what it is internally, or over the Thunderbolt bus. Also, it’s not light years faster than SATA over USB 3.1 Gen 2. But it is an improvement, and with drives like the Kingston A2000 coming in at 10 cents a gigabyte, you’re not paying the premium you once were for NVMe compared to SATA. Buy at your discretion.

In terms of price, the Orico cleans the Fledging Shell’s clock. On the other hand, I absolutely love the Fledging because of its heft and integrated fan. It’s also not prone to popping undone with an impact, as the Orico seems to be. However, exercise a little care with the Orico and you have the same performance at about half the cost. That’s hard to ignore.