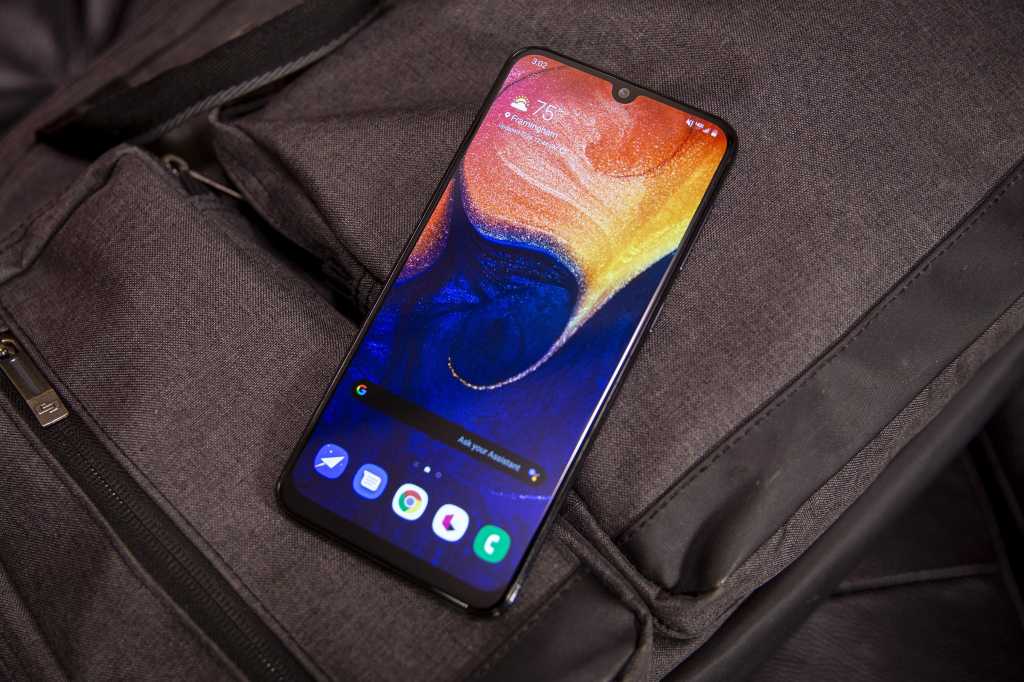 The Galaxy A50 is a great phone with a great display that belies its. $350 price tag.

Unlike the Google Pixel 3a, which basically copied the Pixel 3 note for note with subtle downgrades to bring down the price, there are some major differences between the mid-range A50 and the premium Galaxy S10+. But the main similarities—a giant OLED display, triple-camera array, in-screen fingerprint sensor, and a selfie cutout—give the phones a remarkable kinship. They even have the same pretty, prism-inspired color options.

Update 11 a.m. ET: An earlier version of this review incorrectly stated that the A50 has IP68 water resistance.

Of course, every mid-range Android phone is essentially designed for people who can’t or simply don’t want to pay upwards of a thousand bucks for an S10 or a Pixel 3, and still want a top-notch Android experience. But with the A50, Samsung has done more than create an affordable phone with the illusion of premium. It’s given budget-minded smartphone purchasers a Galaxy handset they can love as much as an S10.

A great design starts at the display

There’s no “plus” model of the A50, but it clocks in at whopping 6.4 inches in diagonal display width, the same size as the Note 9 and Galaxy S10+. Suffice it to say, if you don’t like big phones, the A50 probably won’t appeal to you.

If you can handle its size, the A50 is an extremely well designed phone for $350. Like the S10e, the Galaxy A50 has a “flat” Infinity U screen as opposed to the curved display on the Galaxy S and Note lines. The flatness means there are visible bezels all around, but they’re not distracting in the slightest. If you’re coming from a Galaxy S, in fact, you might actually appreciate them, because you’re much less likely to touch the side of the screen accidentally with the wrong grip. The display’s namesake feature—the tiny notch at the top for the selfie cam—makes the whole package feel more compact than a 6.4-inch phone should.

What isn’t so great is the fingerprint sensor built into the bottom of the screen. Samsung is using an optical scanner here rather than the ultrasonic one on the S10, but the results are no less spotty. Even after a mid-review update, missed scans and error messages were the norm. Oftentimes I opted to enter my passcode rather than even try. It might look cool, but there’s a reason why in-screen scanners are more common on midrange phones than premium ones: The technology isn’t nearly as polished as the pricier one it’s supposed to replace.

The display on the A50 is Full HD OLED (2340×1080), but the difference between it and the 1440p screen on the S10 is more than just pixel density. The gap in display quality is far more noticeable than the one between the Pixel 3 XL and the Pixel 3a, and the pristine attention to detail isn’t nearly as evident as it is on the S10. Case in point: When you’re using an app that doesn’t fill the whole display, the top few millimeters of the screen bend slightly inward, a phenomenon you won’t find on the S10 or Note 9.

If you’re hoping for the deep blacks and superlative clarity of the Galaxy S10 displays, you won’t find it in the A50. But you will get bright, crisp, and colorful images, even if they’re a bit too saturated for my tastes on the default Adaptive Display mode. After all, it’s not easy to compete with Samsung’s flagship Galaxy phones, whose displays are among the best in the business. But for its price, the A50 still has a solid display.

When it comes to performance, the A50 operates under a simple premise: Good enough is good enough. It has 64GB of internal storage but is expandable up to 512GB with a MicroSD card. It doesn’t have wireless charging but will fast-charge out of the box. Samsung’s homegrown Exynos 9610 processor may be unfamiliar to U.S. buyers, but they won’t notice a difference between it and the Snapdragon 600 series chips that power its peers. The A50’s processor is boosted by a nice helping of 4GB of RAM, which gives the phone steady, if not speedy performance.

It’s hardly the screamer that the S10’s Snapdragon 855 is, but anyone considering the A50 obviously won’t need that much power. The Exynos 9610 is perfectly capable of handling light tasks and switching quickly among apps. Compared to the Pixel 3a, I experienced more hiccups and stutters, but nothing that lasted more than a second or so. And because the A50 is running the latest version of Samsung’s Android Pie-based One UI, it often feels even faster than it should.

Samsung’s OS overhaul might be a dramatic improvement on its flagship phones, with stellar gesture navigation and nice visual touches—such as live icons for the Clock and Calendar icons, and an excellent dark mode. The real improvements are in speed and optimization, especially on phones like the A50. Animation and graphics feel fast, apps load quickly, and gesture navigation is smooth and speedy, no small feat for a phone in this price range. The real test will come with time, but when it comes to speed of use and updates out of the box, the A50 is definitely up to whatever tasks you throw at it.

Even more impressive than the A50’s speed, however, is its battery. Samsung has fitted the A50 with an impressive 4,000mAh battery, nearly as big as the one inside the S10+ and Note 10+. In benchmarks, the A50 topped 10 hours. In real-world use it was even better, thanks to One UI’s adaptive power saving. You’ll have no trouble getting through a full day of use with the A50, and 15W fast charging support means you’ll be able to fill it quickly—just not wirelessly, alas.

On paper, the A50’s best feature is its camera, with an impressive array that rivals that of the best phones in the business:

Compare that to a phone like the Pixel 3a, which has a single 12MP lens, or even the Galaxy S10+, and the A50 has a crazy camera array for a budget phone. The ultra-wide-angle lens is certainly nice to have, and you can definitely take solid pictures with it.

If better photography is your main motivator for upgrading your phone, however, you might want to look at the Pixel 3a instead. It’s not that the A50 takes bad pictures, but in my testing they were consistently more saturated and less detailed than the ones I took with the Pixel 3a and the much higher-priced S10+. Even when I wasn’t comparing them side by side, I found that shots snapped by the A50 needed lots more editing than the ones on the other phones, no matter how good the lighting was.

In the photo of the hydrangea flowers above, the A50 (left) stands out for its ultra-bright purple and green hues, making it seem like it was run through a filter. In the picture of the Coleus plant below, the A50 loses the deepness of the red leaves that the other phones capture, which makes the photo appear duller than it should.

I was actually more impressed with the A50’s low light performance, generally a serious challenge for budget phones. The A50 did surprisingly well without the aid of manual controls or a night mode: It focused and snapped quickly, and its overexposure was a boon to the final product, pulling out more detail and clarity than its competitors achieved.

It would be asking too much for the A50 to have a camera that’s as good as the one in the Galaxy S10 and Note 10 phones. I still expected a little more than I got based on the quality of the hardware.

Should you buy a Samsung Galaxy A50?

All of a sudden, budget phones are the rage. Sales of premium phones dip even as prices continue to rise—the Galaxy Note 10+ starts at $1,100—so it’s not surprising that Android phone makers are looking to the lower end of the spectrum for growth. That’s great news for Android users.

The A50 is the perfect representation of that. At $350, there’s a lot to recommend. It has a nice design, a very solid screen, and a solid camera. One rub is that it’s not available on AT&T or T-Mobile yet (and Samsung hasn’t announced whether it will be), but it’s hardly the only budget phone to be locked out of certain carriers. It brings enough to the table where non-subscribers might even consider switching.

When you consider that the Note 10 is $600 more with a smaller screen, similar camera hardware, no headphone jack and no expandable memory slot, you might start to question which phone is supposed to be the compromise.