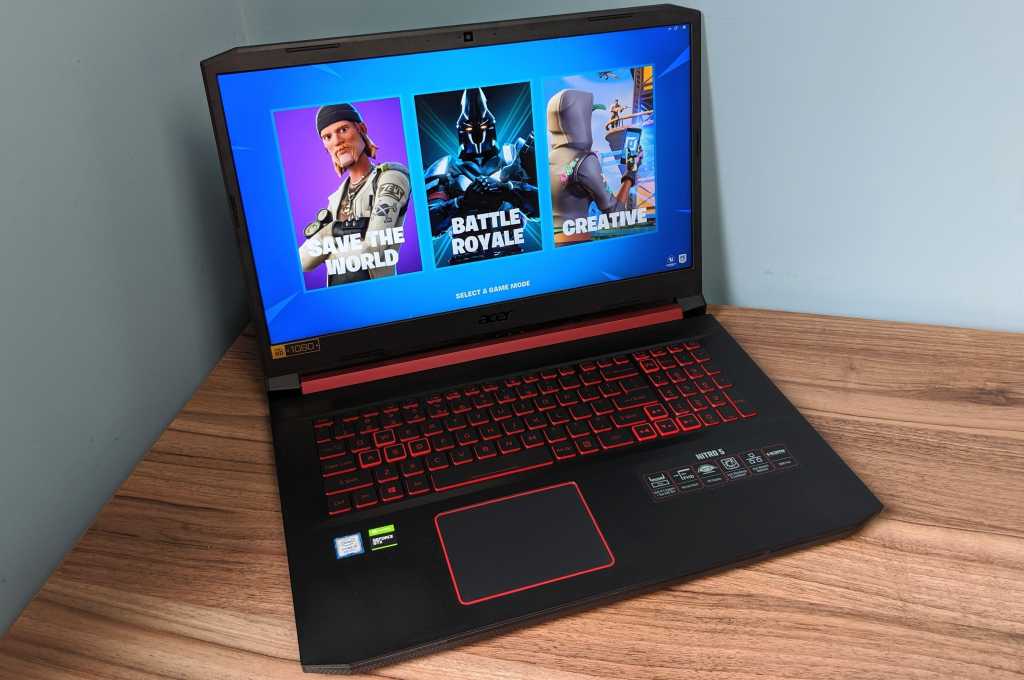 For a certain kind of gaming, Acer’s latest laptop gets the price right.

In the field of low-end gaming laptops, Acer’s latest Nitro 5 (model AN517-51-56YW) is about as budget as they come. But for $880, you don’t need more than what the Acer Nitro 5 offers to play Fortnite and Apex Legends at 1080p and 60 frames per second with maximum settings. You can cross the same frame rate and resolution hurdles in lots of other modern games with a few minor graphical tweaks.

Those who turn up their noses up at sub-144Hz displays should stay away, of course, and the Nitro 5’s speakers are major weak point no matter what kind of player you are. But for folks with calibrated expectations, the Nitro 5 is a big low-budget gaming laptop that hits the right marks.

This review is part of our ongoing roundup of the best gaming laptops. Go there for information on competing products and how we tested.

Unlike a lot of other laptops, the 17-inch Nitro 5 comes in just one configuration:

Those are pretty much the bare minimum specs for a laptop that certainly looks the part of a gaming rig.

Acer says the webcam supports HDR video, but it’s still a 720p camera, so don’t count on crisp video for your next Twitch stream. (Acer also sells a 15-inch version of the Nitro 5, which we’ll review separately.)

If those specs aren’t enough, the Nitro 5 does have a second memory channel for adding another 8GB of RAM or installing up to 32GB total. The use of a single memory module does limit the CPU’s memory bandwidth, which can depress scores that aren’t graphically intensive.

There’s also a slot for a second PCIe NVMe M.2 drive, plus an open 2.5-inch drive bay. Unfortunately, Acer no longer includes individual access hatches for each component, so you have to unscrew and peel off the entire bottom panel for upgrades. And while Acer includes a wiring kit and a link to installation instructions for a hard drive, that same packaging says to bring the laptop to an Acer service center for installation or risk voiding the warranty. One gets the idea that the latest Nitro 5 is less upgrade-friendly than its predecessors.

As for ports, the Nitro 5’s left side has two USB 3.1 Type-A ports (one with power-off charging), a USB 3.1 Gen 1 Type-C port with up to 5Gbps transfer speeds, a gigabit ethernet jack, full-sized HDMI, and a Kensington lock slot. The right side has a USB-A 2.0 port, a headphone jack, and a DC port for connecting the Nitro 5’s beastly power brick. This is a fair selection of ports overall, but the lack of DisplayPort or Thunderbolt 3 output is a downer, especially for folks who’d want to hook up an adaptive sync monitor.

Considering the hexagonal frame, the shiny red display hinge, the red keyboard backlighting, the interlocking exhaust vent pattern on the backside, and the red trim around the keyboard and trackpad, there’s no hiding that the Acer Nitro 5 is a gaming laptop. And at 15.87 x 11.02 x 1.06 inches with a weight of 5.73 pounds, the Nitro 5 will stand out no matter how it’s decorated.

Still, the Nitro 5 is fairly trim for a 17-inch gaming machine, thanks largely to its narrow bezels that measure 0.28 inches on either side of the screen. The entire laptop is only about a half-inch taller and wider than Acer’s popular Predator Helios 300, and it’s only 0.22 pounds thicker, yet its display is 1.7 inches longer on the diagonal.

The display itself isn’t as cutting-edge, but its resolution of 1080p and refresh rate of 60Hz are a good match for the GTX 1650 graphics card inside. Anything better would likely require a more powerful GPU to keep up. Besides, it’s still an IPS panel with great viewing angles, and the peak brightness of 280 nits is decent. (Other gaming laptops we’ve tested lately hover around the 300-nit mark, which is what Acer actually advertises for the Nitro 5.)

If you need to get work done on the Acer Nitro 5, you may appreciate the keyboard’s snappiness, travel, and number pad. In a typing test, I averaged 105 words per minute—on a par with my mechanical keyboard—and never felt uncomfortable banging away on the springy keys.

On the downside, the laptop’s narrower frame and inclusion of a number pad makes the keyboard a bit more cramped than even some tenkeyless 15-inch laptops. The keys don’t always register if you strike them on the corners with a light touch. The placement of Acer’s “NitroSense” key, which lets users switch power profiles and tweak fan speed, is also a nuisance, as you’re liable to hit it by accident instead of the adjacent backspace key.

The trackpad, meanwhile, has a smooth surface that’s fine for work. As with many other laptops, however, its clicking mechanism starts feeling pretty stiff once you’ve crossed above its halfway point. This is about the amount of attention you’d expect Acer to put into the trackpad on a gaming laptop.

Acer’s decision to skimp on speaker quality is less forgivable. Bass response is almost nonexistent, so while you’ll clearly hear gunfire or dialogue in games, you won’t get any of the low-end atmosphere—especially when the Nitro 5’s cooling fans hit full blast.

Let’s start with the anecdotal evidence: Acer claims the Nitro 5 can clear 60 frames per second in “the most popular competitive games.” That held true in rounds of Fortnite and Apex Legends, with both running smoothly at 1080p under maximum graphics settings. Destiny 2 maintained its smoothness under maximum settings, as did the downhill biking game Descenders.

It is possible to find the Nitro 5’s limits, though. Playing Metro Exodus resulted in occasional choppiness while taking in elevated views of post-apocalyptic Russia, and Forza Horizon 3 played best while locked at 30 frames per second. (The latter game is notoriously CPU-intensive, so the GTX 1650 GPU probably wasn’t to blame in that case.)

Depending on the game, a better CPU may not translate to better frame rates, as we can see in Middle-earth: Shadow of Mordor. The Nitro 5 and Nitro 7 were neck-and-neck in this test, though GTX 1060-based laptops maintained a clear lead.

The results were practically identical in the mostly-GPU test of 3DMark’s FireStrike Extreme, with the same rankings and even similar proportions to the Shadow of Mordor benchmark.

In tests of the CPU alone, the Nitro 5 didn’t do nearly as well. This is the only gaming laptop we’ve tested in 2019 with an Intel Core i5 processor instead of a Core i7. In Cinebench the Nitro 5 fell well behind Core i7-equipped laptops. It even turned in worse results than Dell’s G3, which uses last year’s Core i5-8300H instead of the newer Core i5-9300H.

What accounts for the discrepancy? The most likely explanation is that the Nitro 5 runs hot and throttles aggressively. As we also saw with the Nitro 7, the laptop’s CPU temperature immediately jumps from an idle temperature of around 32 degrees Celsius to around 80 degrees Celsius under heavy workloads, and it never let up. The Nitro 5’s HandBrake encoding time—a stress test that tends to reveal thermal throttling—was by far the slowest of any laptop we tested with current-gen Intel chips.

It’s worth noting that Acer offers a “CoolBoost” feature that runs its fans faster (and louder), but turning this on didn’t have any major impact on CPU temperatures. (We left the feature disabled, as is the default, for benchmarks.) The only sure way to bring temperatures down is to prop the laptop up along its edges so the bottom-facing air vents have more room to breathe.

One thing that did surprise us, however, was battery life. Sure, 1080p graphics and a 60Hz panel probably help increase runtime over laptops with more pixels and faster refresh rates, but the Nitro 5 even came out ahead of other laptops with comparable panels, including the Lenovo Legion Y7000P. At least for battery life, the Core i5 CPU is likely advantageous over the Core i7 chips that are more common in gaming laptops.

The ultimate question is whether the Nitro 5 needs a better-performing CPU, even if it would push pricing closer to the $1,000 mark. The answer, at least to me, is no. Even without a Core i7 processor, the Nitro 5 accomplishes its mission of running games like Fortnite smoothly at maximum graphics settings, and it does so on a big screen with slim bezels. Every laptop has compromises, and the Nitro 5 makes the right ones in pursuit of entry-level gaming.

Just make sure to plug in some headphones while using it.