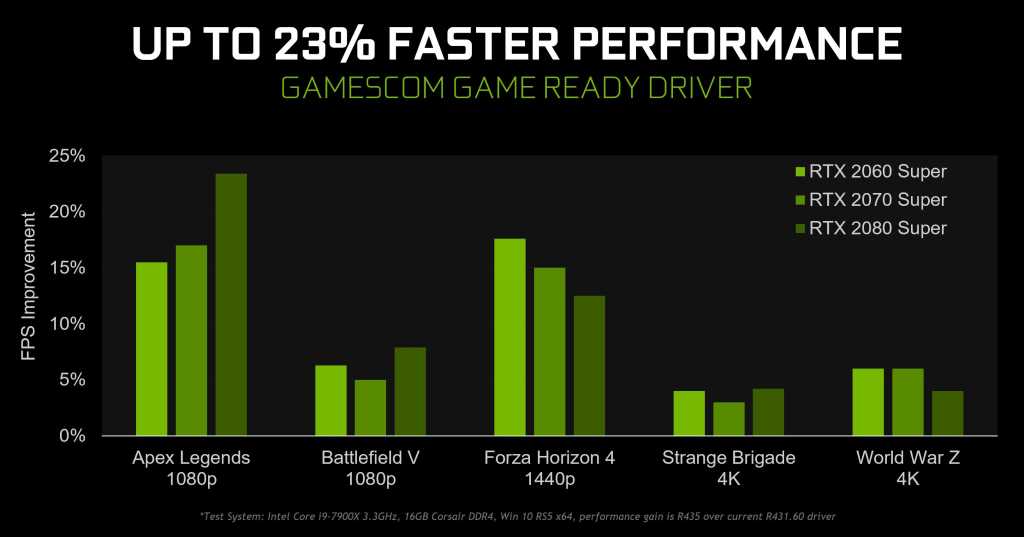 Nvidia wants everyone to know that those nifty graphics features AMD and Intel have been touting are cute, but watch this. On Tuesday at Gamescom, Nvidia dropped the Gamescom Game Ready driver, a massive update that:

Up to 33 percent lower latency

Nvidia’s Ultra-low latency response time mode can slice up to 33 percent of latency—the time between when you click your mouse to the response on the screen—by enabling “just in time frame scheduling.”

If that sounds familiar to you, it should, because AMD touted its low-latency mode at E3 with its Radeon 5700 series of cards. Lest you give any credit to AMD though, the snark in Nvidia’s blog post announcing the feature made it clear the company’s calling firsts.

Nvidia said the ultra low latency mode has three settings. ‘Off’ sets the game engine to queue 1 to 3 frames for maximum render throughput (and more latency). ‘On’ limits the pre-rendered frames to 1, which Nvidia said is the equivalent of running “Max_Prerendered_Frames = 1” on older drivers. The last setting is ‘Ultra,’ which spits the frame out to the GPU in “just in time” for the render to begin.

The company said the mode is most effective at times when the game is GPU-bound, and frame rates are hovering between 60 fps and 100 fps. The mode should work in “all” GeForce GPUs in DirectX 9 and DirectX 11 games. The blog post said DirectX12 and Vulkan let the game decide when to queue frames for rendering, so the driver would have no control over lowering latency.

The other clap back came in the form of a new Freestyle Sharpening Filter in GeForce Experience. Nvidia said the filter offers improved image quality and performance over its current “Detail” setting Freestyle filter. Yup, again, there must be an echo in the room, because sharpening was a feature AMD touted at its launch event for the Radeon 5700. The company made sure to point out the superiority of Radeon Image Sharpening over Nvidia’s DLSS.

Although we don’t know the performance cost of Nvidia’s Freestyle Sharpen Filter, Nvidia said its approach is different—and better. “Freestyle gives gamers the ability to customize the amount of sharpness, from 0 to 100%, and apply this customization on a per game basis using the in-game overlay. We believe sharpness is based on personal preference and varies from game to game, so with Freestyle we designed a simple solution that remembers your settings in each game,” the blog post said.

That’s not all. Nvidia said the new driver now supports G-Sync Compatible modes on three more FreeSync monitors: The Asus VG27A, Acer CP3271, and Acer XB273K GP now will have variable refresh rates supported automatically. What that means for consumers is if you have a FreeSync panel that has been blessed by Nvidia and use it with a GeForce card, the variable refresh rate will turn on automatically (as long as the monitor has the feature turned on).

That brings the number of FreeSync monitors that Nvidia’s G-Sync Compatible mode automatically supports to 38. And yes, there are roughly 780 monitors listed by AMD with support for FreeSync.

The last feature we’ll mention in the new driver is 30-bit color support. Also commonly called 10-bit color, Nvidia first introduced 30-bit to the GeForce line with its Studio Driver in July. That driver, however, is mostly intended for content creation on GeForce and Titan cards. Support for a 30-bit workflow now moves over to the Game Ready Driver. The 30-bit support is long overdue: Prior to the Studio Driver support for 30-bit color, Nvidia offered it only on its pricier Quadro cards.