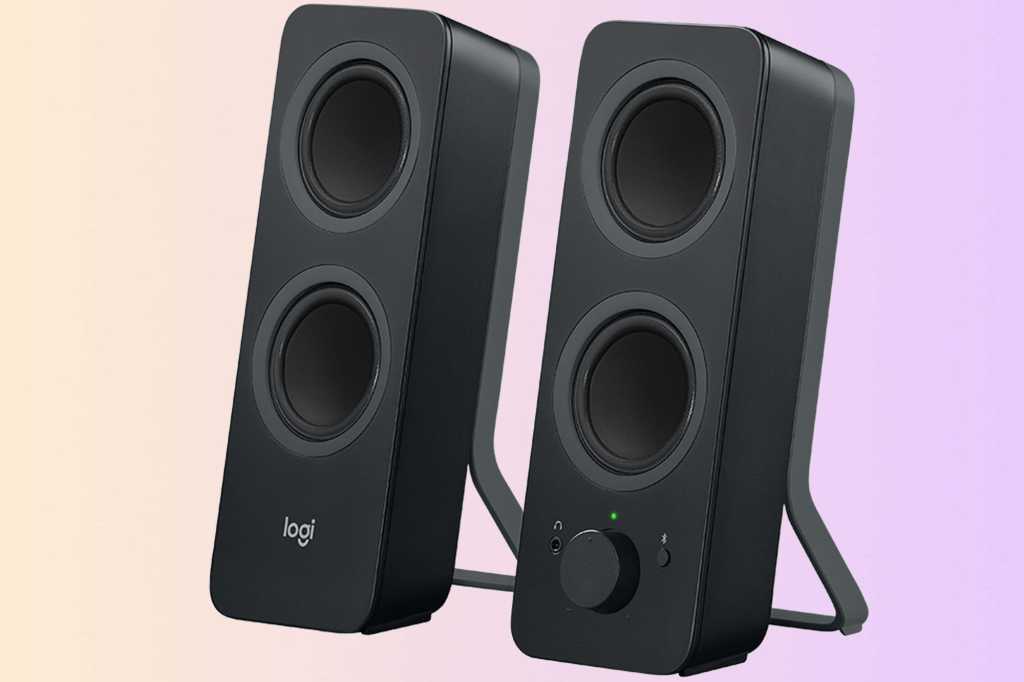 Image: Logitech
At a Glance

Most of us flit among multiple devices throughout the day, so it’s reasonable to expect our “computer” speakers to do so as well. Logitech’s Z207 speaker system was designed with this in mind. Supporting both wired and wireless connections, it can effortlessly switch from your PC to your tablet to your phone, bringing rich, room-filling sound to your media wherever it’s stored.

This review is part of our ongoing roundup of the best budget computer speakers. Go there for information on competing products and how we tested.

Each of the speaker enclosures measures about 9.5 x 3.5 x 4.9 inches (HWD) and weighs just over 2 pounds. They’re constructed entirely of plastic, including the attached stands. My review model had a matte-black finish, but they’re also available in white. Both enclosures contain one uncovered speaker driver that handles the mid and high tones, and one passive radiator for the bass.

The Z207 speakers lack setup instructions, but they don’t need any. The enclosures are hardwired together, with the power/volume knob and Bluetooth button on the right one clearly designating it as the control unit. All you have to do is plug one end of the supplied 3.5 mm audio cable into the AUX jack on the back of that speaker and the other end into your computer. Then just turn the system on, and fire up you favorite playlist or movie.

The speakers deliver 10 watts of peak power. Sitting at the computer, I kept the volume around the halfway point. But I could crank it higher without distortion if I wanted to soundtrack activities away from my desk. The sound was well balanced, with clear highs, mids, and bass–the last is surprisingly deep for system without a subwoofer.

I don’t keep any music files on my computer, so when I wanted to listen to downloads I had to switch to my phone. The initial pairing process takes under a minute: You press the Bluetooth button on the control speaker to put it in pairing mode (the power LED blinks green and blue), then look for the Z207 to appear on your phone’s list of available devices. Mine connected to the speakers automatically. The speakers support up to two Bluetooth connections in addition to the wired connection to your computer. To switch streaming between them you just press Pause on one device and Play on another.

Logitech’s Z207 speakers deliver impressive audio with few compromises for their modest price. And their ability to support up to three devices at once is surely welcome given our multi-device habits. Some Amazon reviewers have commented on their size as they do take up a fair amount of desk space. If that’s a concern, you might consider AmazonBasics USB-Powered Computer Speakers or Creative’s Pebble speaker set, both of which have a smaller footprint and a bit more style without sacrificing sound quality. You’ll have to sacrifice multi-device support, though, as neither of those systems include Bluetooth.