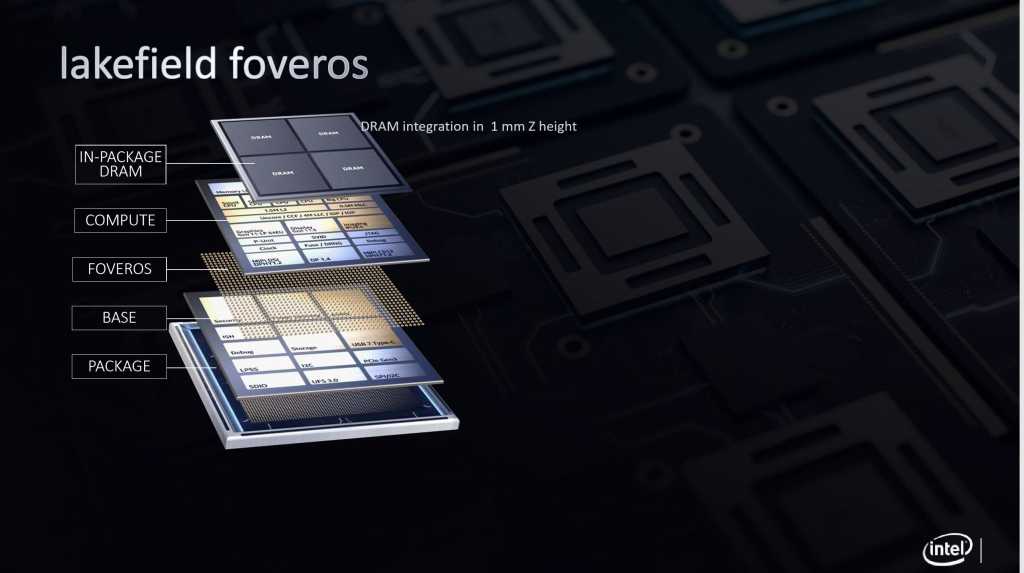 Intel executives said Tuesday that its hybrid Lakefield architecture will ship late in the fourth quarter, followed by future revisions that will shrink the design further.

Previously, Intel has said only that Lakefield will ship in 2019.

Lakefield is one of the more technically interesting chips that Intel has on its roadmap, made up of a split between an undisclosed Sunny Cove CPU (the same CPU architecture that forms the heart of its Ice Lake chip) and several Tremont Atom cores. At the Hot Chips conference Tuesday at Stanford University, Sanjeev Khushu, a vice president in the Infrastructure and Platform Solutions Group at Intel, said that Lakefield would be the first of successive generations of similar designs.

Lakefield uses a pair of stacked die: a “compute” die, and a “base” die, joined by a die-to-die connection layer. Intel puts all of the compute-intensive logic on the compute die: the Sunny Cove CPUs and the graphics and media cores, as well as the Tremont Atom CPUs. (In Intel’s example, four Tremont cores were used.)

The rest of the logic is placed on the “base” die: USB, PCI Express, and all of the other I/O. Because the “base chip” logic isn’t as sensitive to performance, it can be manufactured on an older, less expensive process technology. In the Lakefield demonstration that Intel used, the base die was manufactured on Intel’s P1222 process, said to be a 22nm process technology.

Khushu said there would be future generations of Lakefield as well. “The main thing is that this isn’t a one-off [design],” he said. Khushu suggested that Intel will eventually migrate Lakefield to the 7nm and 5nm process nodes. It’s not clear, however, whether the Lakefield technique of splitting the CPU and base dies will be applied to other products.

Lakefield uses the Sunny Cove and Atom cores in concert. Foreground, high-priority tasks are given top the Sunny Cove core, while background tasks are handed off to the low-power Atom chips. The combination improves both power and graphics, Khushu said.

Intel hasn’t discussed what kinds of devices would house Lakefield. The company has historically used a dual-display device, such as what it showed off at Computex, as a possible Lakefield-powered product. If Intel is scheduled to ship Lakefield by the end of the year, it sounds like CES may be the first time we see Lakefield come to fruition.