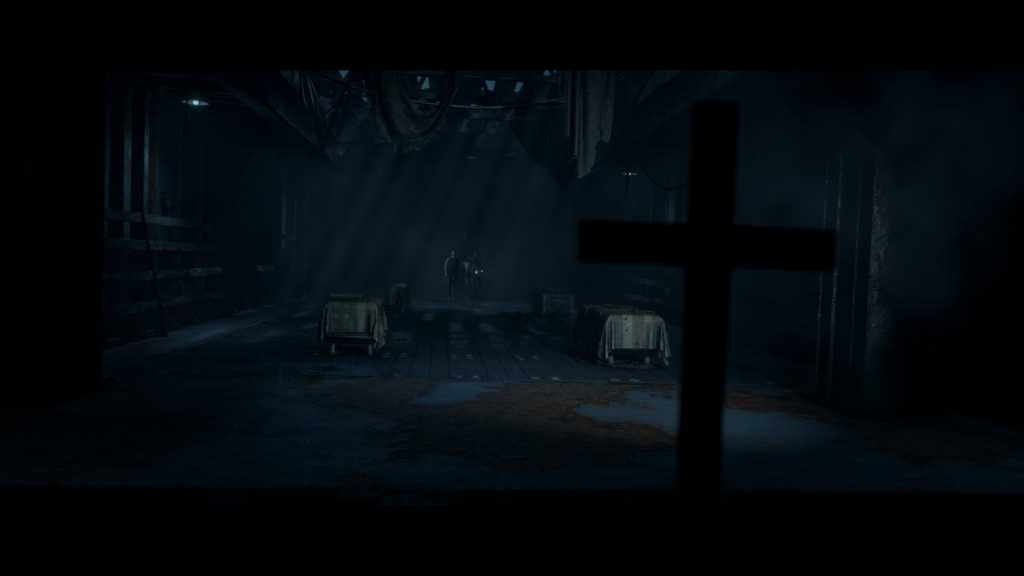 The spiritual successor to Supermassive’s horror adventure Until Dawn is a storytelling success, though PC port woes make release day a bit of a letdown.

“It’s all about decisions, isn’t it?” says the steely-eyed Curator. “Decisions made in a hurry, in a panic.”

He peers across the table, holding judgment over my own decisions. One mistake, even made in ignorance, can be the difference between surviving Man of Medan or leading your characters to a grisly end. Run or hide. Take the knife or leave it behind. Apologize or say something sarcastic. Open the coffin or—

Wait, why would you open the damn coffin? Have you never seen a horror film before?

Four years ago, Until Dawn adapted Telltale’s branching-story structure to the horror genre, to great success. The catch? It was a PlayStation 4 exclusive, one of the handful of games that convinced me to buy that console in fact.

Luckily developer Supermassive’s follow-up The Dark Pictures Anthology is being published by Bandai Namco and is a bit less choosy about platform, with the first entry or episode Man of Medan coming to PC this week—though not without some caveats. Before we get into the substance of Man of Medan, it’s worth noting the port is rough.

Case in point? If you try to access the keybinding menu from in-game, a.k.a. anywhere that’s not the main menu, it simply never appears, soft-locking the game and forcing an Alt-F4 exit. And while this is the most egregious bug I’ve been able to reproduce, there are plenty of others. Having a keyboard and gamepad plugged in at the same time occasionally results in buttons not registering correctly, or in controls being overlaid on-screen—for instance, showing the Xbox’s A button and a keyboard’s “S” at the same time.

You’ll want a gamepad plugged in though because mouse-and-keyboard makes the already sluggish controls feel even less responsive. Tank controls don’t map well to WASD, I can tell you that, and the menus are almost unusable. Backspace to go up a level? What?

I’ve had three hard crashes to desktop as well, in about six hours.

Man of Medan is constantly saving progress, so even that’s not an insurmountable issue. These are all pretty standard first-time port woes, and I expect most can be fixed with a patch or two. That said, the PC version is almost certainly the weakest option at release.

It’s a shame too because Man of Medan is every bit as neat as Until Dawn. As I said, it’s a branching horror game where your actions and dialogue options can lead to different—often deadly—outcomes for the people involved.

The bulk of the game involves the real-life ghost ship, the Ourang Medan. Stemming from the late 1940s, the legend goes that a distress signal went out from the Ourang Medan one night saying that all the officers and crew were dead or dying. The last message received was a perfunctory and ominous “I die” from the radio operator himself. Upon finding and boarding the ship, those who discovered the Medan claimed the entire crew was dead, many of them appearing to have died of fright. Preparing to tow the Medan to port, it suddenly exploded and sank to the bottom of the ocean.

Man of Medan presupposes a version of events where that last part didn’t happen and the Medan simply floated abandoned in the ocean, a slowly rusting tomb. Decades later it’s discovered by a group of four amateur thrill-seekers and their hired captain who are forced by circumstance to board the Medan and…well, if you’re lucky they survive.

I was lucky, and they did—a fact I’ll chalk up to decades of absorbing horror movie tropes. Hint: Whatever seems like the obvious solution, you should probably choose the opposite. And absolutely don’t let your curiosity get the better of you. Again, why would you open the coffin?

Even so, it’s entertaining and impressive to see where the different paths intersect. I rarely replay Telltale’s games, or others of that ilk. The few times I have, I’ve realized that the “branches” are mostly a clever bit of misdirection. Not much actually changes when you go left or right.

Man of Medan is different though. Death is omnipresent. Characters might depart the story in the first act, completely changing what follows. Scenarios that seem banal in your run might be life-or-death in another, provided you’ve taken (or left behind) certain items. Even an element that seemingly didn’t come into play for my survivors was then addressed in a post-credits scene, a dark epilogue to an otherwise happy ending.

The end result is more akin to a high-budget version of Inkle’s games, myriad small choices leading to large and obvious divergences in the long run. Even character growth is governed by this system. Some of your characters—those that survive, at least—will come out of the Medan unscathed. Others will seem deeply scarred by the horrors they endured upon the ship.

It’s an experience that begs to be replayed, and luckily there are a few different ways to do so. For the solo player, the Curator’s Cut unlocks after your first run—an alternate version of the story that gives you control of different characters for the major story beats.

The multiplayer options are what I’m looking forward to exploring on subsequent runs though. There’s a two-player mode that requires two copies of the game and an online connection, which is fine. But I’m mostly excited to get a group of friends together and play through the Movie Night mode, wherein two to five people pass a single controller around the room and try to keep their allotted characters alive. It’s a neat social aspect, similar to the one I had watching Netflix’s Bandersnatch earlier this year, but with more of a traditional video game element included.

That said, the “traditional video game” parts of Man of Medan are probably its weakest as well. Like Telltale’s games, and indeed like Until Dawn, the action in Man of Medan is subpar. I was actually put off Until Dawn because of its unwieldy tank controls and the sluggish button prompts.

Man of Medan is…pretty much the same. Characters walk-stumble through environments like they’re 800-pound marionettes, and trying to guide them through some of the Medan’s narrow nautical doorways is scarier than anything the story has to offer. Even picking up items is a slow and tedious chore. I think it’s going for “grounded” and “tactile,” but it mostly feels clumsy. (And that’s the best-case scenario, meaning with a gamepad. I already mentioned the mouse-and-keyboard struggles above.)

Performances are pretty hit-or-miss as well. Even the liveliest characters have a few lines that fall flat, and the facial captures can dip from impressive to uncanny in a hurry. It doesn’t sink Man of Medan’s appeal, but the film-like presentation doesn’t always hold up.

Oh, and there’s a really strange musical choice for the opening credits sequence—like a B-tier show on The CW. I’ll leave it at that.

Overall I really enjoyed Man of Medan though and I’m looking forward to replaying it—and to whatever comes next for the series, as it’s pitched as an anthology. I’m especially curious to find out how long we have to wait. Man of Medan falls in this strange gray area between episodic game and standalone-with-sequels, and it’ll be interesting to see how Supermassive handles the transition.

Either way, I’ll be there. Man of Medan doesn’t tell the most unique story, and indeed you’ll probably unravel it long before the characters do. It’s unique in the telling though, and often that’s what counts more.