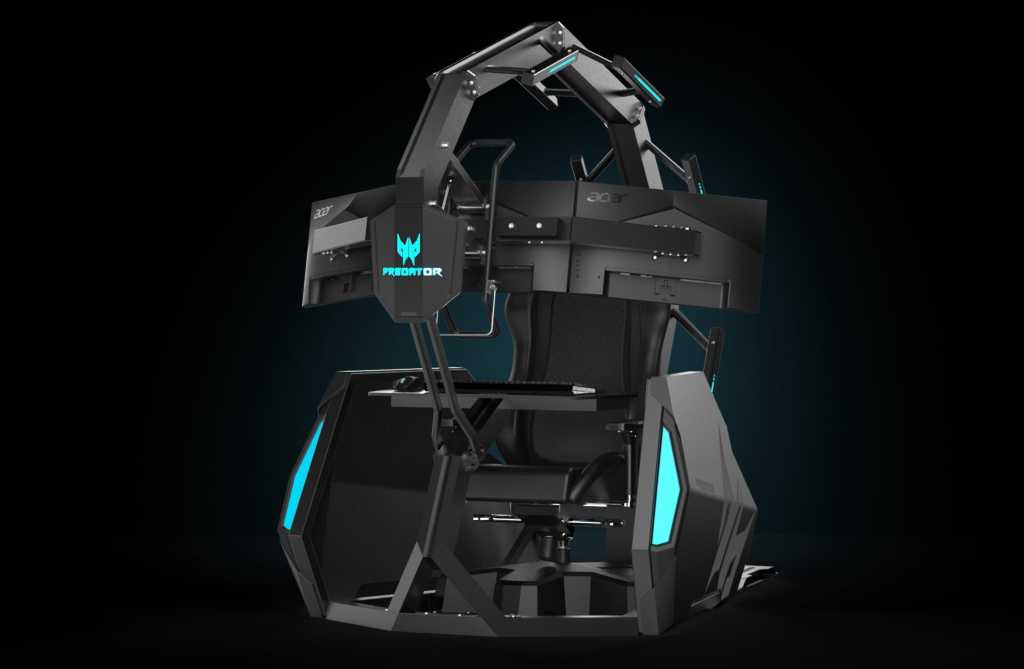 Acer rolled into the annual IFA tradeshow in Berlin with plenty in store for PC gaming enthusiasts, showing off a hulking $14,000 multi-monitor gaming cockpit, a laptop with a blazingly fast 300Hz display, an affordable new gaming notebook, and more.

Believe it or not, the $14,000 Predator Thronos Air is actually $6,000 cheaper than the original Predator Thronos gaming chair revealed last year. The monitor arm that holds up to three displays isn’t motorized anymore, but the Thronos picked up massage capabilities, so that’s a net win in my book. It’s still a gigantic steel beast of a cockpit, complete with Acer-blue LED lights, a foot rest, and a camera mount above the middle monitor for any budding Twitch stars. Look for it in the fourth quarter, but be warned: That sky-high sticker price doesn’t include an actual gaming rig or any displays.

You might not need a luxurious $14,000 battlestation to get an awesome monitor experience though. Acer’s updated Predator Triton 500 gaming laptop bumps its refresh rate all the way to a face-melting 300Hz. Yes, 300Hz. That’s so fast that the Core i7-8750H and GeForce RTX 2080 Max-Q inside its slim 0.7-inch chassis might not even be powerful enough to feed it at full-force in all scenarios even at its 1080p resolution. Still, 300Hz. Yes please. It’ll start at $2,800 when it launches in December.

Acer isn’t your only option though, as Asus also announced a pair of gaming laptops with 300Hz displays.

Speaking of thin gaming laptops, the Predator Triton 300 refresh crams a Core i7 and Nvidia’s GeForce GTX 1650 into a slim 5.07 lb., sub-0.8-inch frame, which sounds reminiscent of the newly upgraded Razer Blade Stealth. It comes with 16GB or 32GB of RAM, up to two 1TB NVMe PCIe SSDs in RAID 0, and a 2TB hard drive, along with a 1080p display buzzing along at a speedy 144Hz.

I’m a huge fan of high refresh-rate gaming, but equipping this particular laptop with such a speedy screen is a bit of a head-scratcher, as the entry-level GeForce GTX 1650 won’t come anywhere near hitting those speeds in anything but esports titles with the graphics settings nerfed. Acer only announced EMEA availability for the Predator Triton 300, where it will cost €1,299 in October.

It wasn’t all gaming for Acer at IFA. The company also announced updated versions of its ConceptD creator notebooks, its Swift and Nitro mainstream laptops, four new Chromebooks, and even a portable projector. Check out the company’s next@acer IFA page to see more.