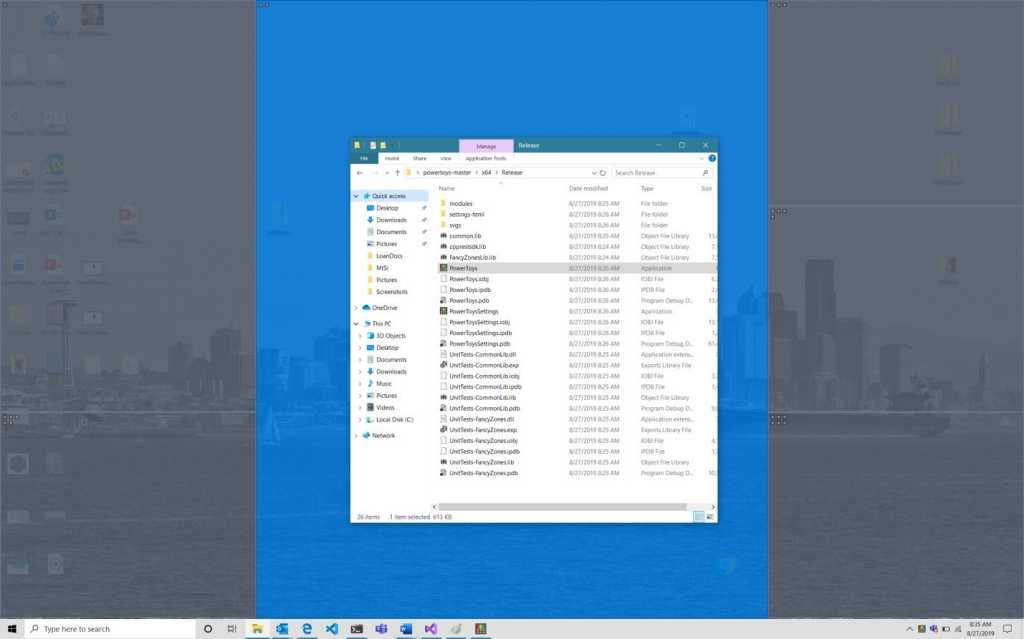 Note: We’re republishing this story from Sept. 6, 2019, because an update has added multiple-monitor support to FancyZones, which resolves one of its few outstanding issues.

If you’re a fan of Windows 10’s Snap feature, you’ve been waiting and hoping for Windows to allow you to design your own custom Snap layouts. Now you can! One of the first Windows 10 PowerToys apps, FancyZones, does just that—and it looks incredible.

If you don’t know what Snap does, head to a PC and open any window there—this story will do. Then press the Windows key and one of the directional arrows. If you hit Windows + the left arrow, for example, Snap snaps a window as a column attached to the left side of the screen. If you drag it toward any corner, the window will snap to that corner, allowing you to create a 4-window tiled effect.

But if those windows are a little smaller than what you want? Or if instead of two columned windows, you want three? Until now, you’d have had to create your own, dragging and resizing windows manually. Now you don’t have to.

Microsoft’s PowerToys were a beloved staple of the Windows 95 era, allowing users to add vetted extensions to the basic operating system. Others, like SyncToy’s tool for syncing folders, emerged as PowerToys for Windows XP and Vista. Now, PowerToys is back, and each app even has the code available on GitHub for suggested modifications. There are two initial PowerToys apps: a Shortcut Guide, and the FancyZones app. You’ll need to download the PowerToys installer, then select which apps you’ll want to install. You don’t even need to be on a Windows 10 Insider build to get it—this is open to anyone.

The Shortcut Guide is basically a cheat sheet to what’s going on in your Windows screen. With the Shortcut guide enabled, depressing the Windows key for more than a second will turn on the available Windows shortcuts for what you’re currently seeing on your screen. The implication is that Shortcut Guide is somewhat context-aware, and will display what action those shortcuts will take given the current state of the desktop and active window. If, after you’ve triggered an action, you still hold down the Windows key, those shortcuts will adjust to reflect what you’re seeing.

FancyZones includes Snap templates, or you can create your own

When you Snap a window to the side or corner of the screen, what you’re doing is telling the window to shrink (or expand) to a predefined region of the screen. What FancyZones does is allow you to select from a list of templates of predefined zones, or you can create your own.

In effect, it allows you to create your own version of Windows Snap, so that you can snap apps to cascading windows, or to regions on the screen.

What’s great about the predefined templates is that it creates useful layouts right away: three columns of text that might be well suited for a widescreen monitor, for example—or, alternatively, a “priority grid” that widens the middle column.

If none of these work, you can also create your own zones. FancyZones allows you to do this either additively, by creating zones that can be resized; or via subtraction, where a number of predefined zones can be removed or adjusted. If you’re looking for a way to quickly and easily rearrange windows for Windows’ Snap feature, FancyZones definitely is worth a look.

When we originally wrote this story, there was just one catch: it only worked on a single display. Now, that’s changed, and FancyZones works on multiple monitors. It’s still a little awkward: there’s a toggle switch in the FancyZones Settings that allows the app to “follow mouse cursor instead of focus when launching editor in a multi screen environment”. I’d suggest flipping that to “off,” dragging the zone configuration screen to the appropriate monitor, and setting up the Zones that way.