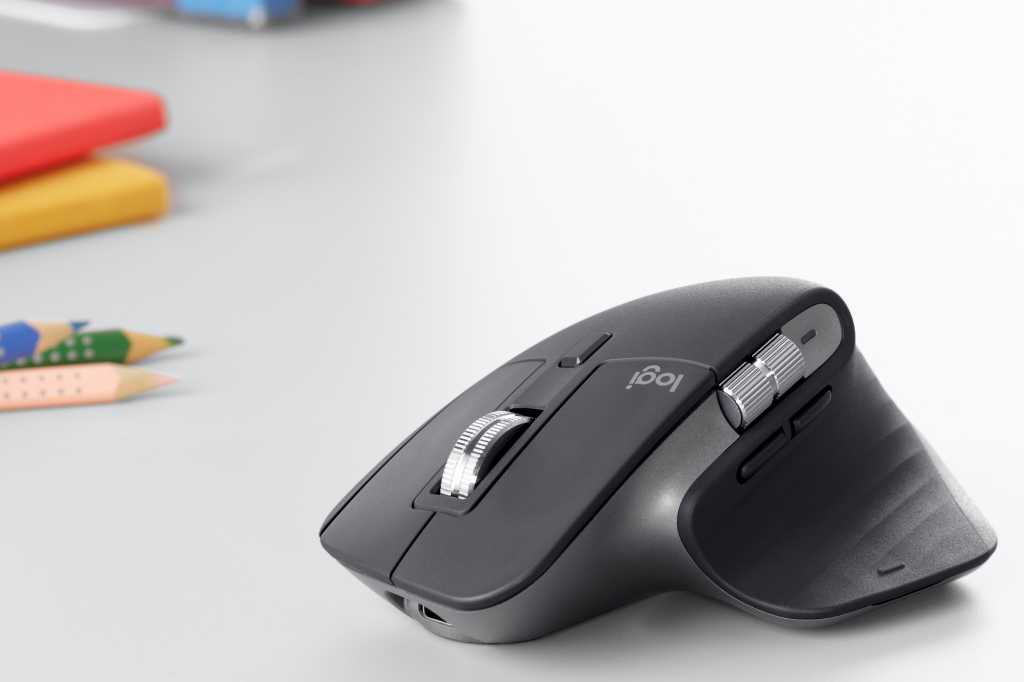 Logitech’s MX Master 3 is an innovative, highly customizable mouse that raises the bar for this humble peripheral.

Keyboards and mice have a pretty buttoned-down reputation, but ironically some of their most demanding users are right-brain types. That’s whom Logitech is targeting with its MX Master 3 mouse and MX Keys companion keyboard. Both these peripherals have been designed with an emphasis on comfort and customizability to appeal to software developers, designers, and other “creatives.” The MX Master 3, in particular, raises the bar, transforming the mouse from a simple input device to a multi-function tool that can dramatically enhance productivity.

The MX Master 3 takes its design cues from the MX Master 2s, but make no mistake—under the hood this is a far different mouse. Let’s start with the redesigned scroll wheel. The machined-steel wheel employs what Logitech calls MagSpeed Electromagnetic scrolling. In lay terms, it means you can switch from measured line-by-line scrolling to blazing through pages just by spinning with more force. One flick of the wheel can scroll through 1,000 lines in one second, says Logitech, which should put a smile on the faces of coders and anyone who has ever worked with a voluminous spreadsheet.

I found this speedier scrolling came in handy for everything from searching through multi-page documents to scanning social media feeds. It takes some getting used to, though. In this “free spin” mode, scrolling is virtually frictionless and silent. Without the click-and-bump tactile feedback I’d become accustomed to from more conventional mice, it felt like things could reel out of control quickly. Still, even when an overzealous nudge sent me racing down a page, all it took was a finger-tap on the wheel to stop it in its tracks. And if the fast lane ever gets to be too much, there’s a button behind the scroll wheel you can press to put the mouse in “ratchet” mode, which returns scrolling to a more conventional, incremental pace.

Much of the action a takes place on the thumb side of the mouse. Another wheel here lets you scroll horizontally, though not with the same speed as the main wheel. A pair of buttons for moving back and forth sit below it. Another on the thumb pad allows you to initiate gestures—for example, opening Task View (Windows) or Mission Control (Mac OS) when you click and hold the button while moving the mouse up.

As with its MX Keys mate, the MX Master 3 can be paired with up to three devices via the Logitech Universal Receiver dongle or Bluetooth. In the latter case, you toggle the Easy Switch button on the bottom of the mouse to a channel to put it in pairing mode, then select the MX Master 3 from the list of available Bluetooth devices on your computer, tablet, or phone. Once multiple devices are paired with the mouse, you can switch among them by toggling the Easy Switch button to the appropriate channel.

If like me, however, you tend to use multiple computers at the same time, you can use the MX Master 3 to control them simultaneously using Logitech Flow. All the computers have to be on the same network with the Logitech Options software installed on each and Flow enabled in it. Once that’s done you can use the mouse across computers simply by dragging the cursor off the edge of one screen and onto the other. Better yet, you can transfer images, text, and even entire folders between computers by copying and pasting them using this Flow method. It even works across operating systems; I used it regularly to transfer files between a MacBook Air and an Acer laptop.

Besides being required to enable Logitech Flow, the Logitech Options software unlocks a wealth of custom options for the MX Master 3. Any of the mouse buttons can be remapped to other tasks and functions just by selecting it from a graphic image and choosing from a list of options. The software also gives you considerable control over pointer and scrolling functionality. You can use these options in combination to create custom shortcuts for specific apps.

But a lot of folks, including yours truly, aren’t inclined to create a half-dozen or so different multi-button mappings. Knowing this, Logitech included a bunch of preset profiles for some of the most commonly used apps. When you install the Logitech Options software, it will scan your computer for these apps and enable the mappings for whichever ones it finds.

The mappings themselves are pretty astute. In Photoshop, for example, the horizontal scroll wheel controls brush size; the front and back buttons will undo and redo changes; and the main scroll wheel will pan an image if you hold it down and move the mouse. You may, of course, reassign any of these to some other task, but in virtually all the apps I found the default mappings were the most intuitive ones.

In the couple of weeks I used the MX Master 3, it made me feel more productive in most apps. Where it didn’t, the work at least felt more pleasurable. Like the MX Keys keyboard, it’s relatively expensive at $100, but if you’re a Microsoft Office or Adobe Creative Cloud power user, it is well worth the investment.