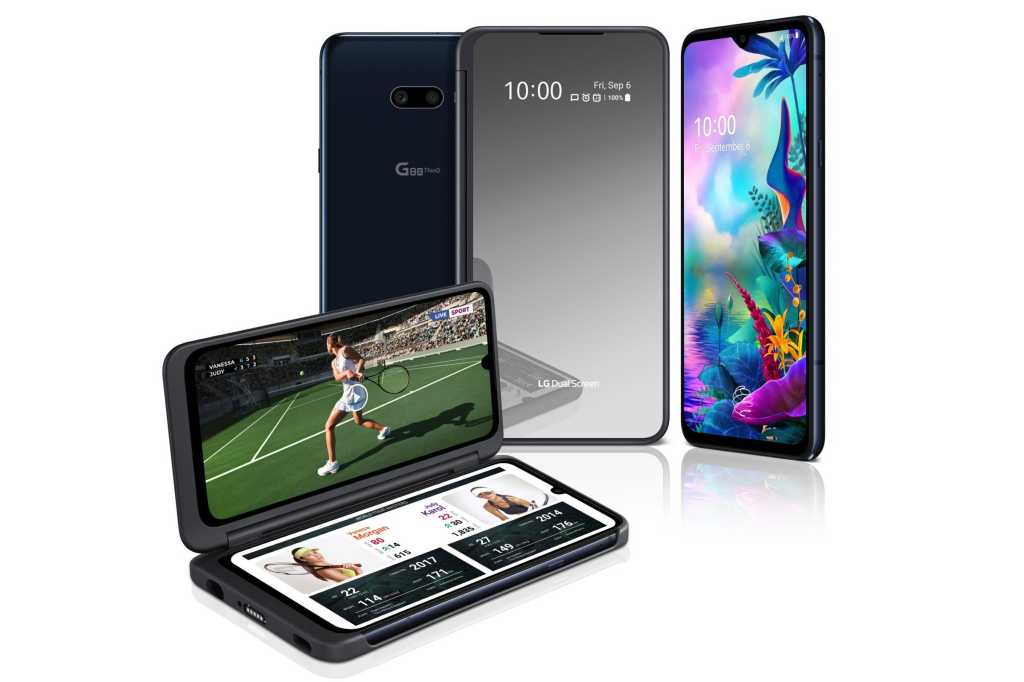 While all eyes are on Samsung and its next-gen Galaxy Fold that transforms from a 4.6-inch phone to a 7.3-inch tablet, LG has its own idea of what a folding phone should be. And it’s almost charming in its immaturity.

Instead of a revolutionary display that bends, the LG G8X merely adds a second screen via a snap-on case. It’s kind of like hooking up a second monitor to a laptop—if you wanted a monitor that gets in the way of using the laptop. When attached, the second display adds bulk and weight, and the gap between the displays makes it hard to type on the main screen and nearly impossible to type on the secondary one, and blocks the volume keys. The Dual Display concept is similar to the ZTE Axon but portends to be less successful.

Otherwise, the LG G8X is very similar to the G8 it seemingly replaces, with a Snapdragon 855 processor, 6GB of RAM, and 128GB of storage. The 6.4-inch OLED screen is slightly bigger than the G8’s 6.1-inch display, but it’s Full HD rather and Quad HD. It also has a bigger battery (4,000mAh vs. 3,500mAh), an in-display fingerprint sensor, and a headphone jack. And perhaps most importantly, it ditches the G8’s time-of-flight sensor-enabled gimmicks for a standard 32MP selfie cam.

The main camera brings a dual lens that pairs a 12MP main lens with a 16MP ultra wide one, and it brings a few new AI-powered ThinQ features, including AI Action Shot, that automatically boost the shutter speed when fast-moving subjects move into the frame, and ASMR mode, which adds sensitivity to the microphone in case you want to make one of those weird whispery videos with your phone.

Have two displays will travel

But all anyone will want to talk about is the G8X Dual Display. While LG previously sold a snap-on case for the V50 in Korea, the Dual Display for the G8X has been improved. This time around, it connects via USB rather than pogo pins, and adds a second 6.4-inch display with its own camera-less notch to match the look of the primary display. It’s basically like holding two G8X’s together and using them at once.

Functionality, of course, is a little better than that, but not much. Some of LG’s apps are optimized for the second screen, so you can open things on the opposite screen, but for the most part, you’re going to be using separate apps side by side with little to no communication between them. You can swap screens with a tap but there’s no dragging and dropping between them. You can set an app to launch when the second screen is open, but you can’t make work spaces that automatically put two apps side by side.

But there are some cool potential uses. Some games allow you to use the secondary display as a D-Pad controller, while other apps allow you to type on one display in landscape mode while viewing your content on the other screen. But those use cases are few are far between. I suppose it’s possible that hundreds of developers will buy into LG’s dual-screen concept, but it seems unlikely, especially since actual folding screens are more likely to become a thing we use.

We don’t know how much the G8X is going to cost. LG priced the G8 at $850, and assuming the Dual Display costs at least $150, it could top a grand, which is going to be a tough sell against phones like the Galaxy S10+, Note 10+, and upcoming iPhone 11. And without robust sales, LG is going to have a very hard time convincing developers to retook their apps to support it.

But if you don’t want to spend $2,000 on a Galaxy Fold, the LG G8X, which is due to arrive in the fourth quarter of 2019, is certainly an option. Just be prepared for a few snickers when people realize what it is.