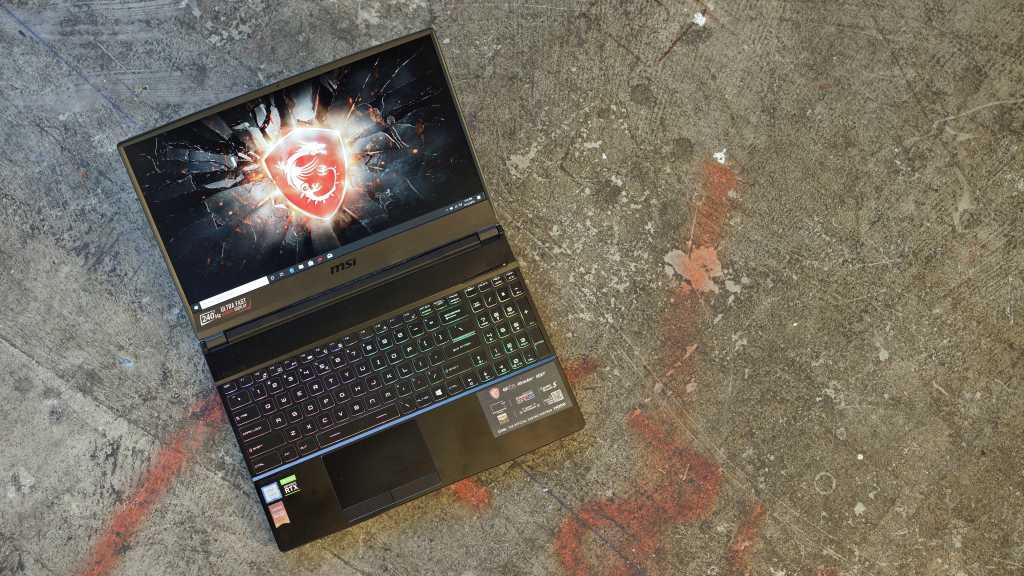 MSI’s GE65 Raider is proof positive of how far gaming laptop performance has come, with its 9th-gen Core i7-9880H and full-power GeForce RTX 2070. All this in a laptop that weighs just over five pounds. Only the battery life disappoints.

MSI’s GE65 Raider is proof positive of how far gaming laptop performance has come. Just two years ago, a top-end gaming laptop would run on a quad-core 7th-gen CPU. The GE65 Raider doubles the core count with its 9th-gen Core i7-9880H chip.

Real-time ray tracing support? The GE65 Raider has that, too, with its full-power GeForce RTX 2070.

All this, mind you, weighs just over five pounds. This much power at this weight comes with a compromise, though, which we’ll get to later. First up, the full specs:

The laptop measures in at 14 inches wide, 9.76 inches deep, and 1 inch thick. It weighs just a shade over five pounds alone. Throw in its massive 280-watt brick, and you add another 2.18 pounds to your backpack.

We should point out we actually found the size of the GE65 to be very appealing. It’s not anywhere near as slender as its GS65 Stealth sibling, but it feels and looks amazingly compact considering its performance.

That same thickness also lets MSI jam in up to seven heat pipes inside. The CPU gets two dedicated heat pipes and two more shared with the GPU, while the GPU gets three dedicated pipes.

First the bad news: There are neither ports nor doors on the GE65 Raider. And you’ll probablty want to look up some Youtube videos before you split it up.

The good news is pretty good, though. Inside the GE65 Raider you’ll find two M.2 slots (one used), two SO-DIMM slots, an M.2 wireless module, and a spot and cabling for a 2.5-inch drive. Unlike those thin gaming laptops, you can access it without having to remove the motherboard.

The trackpad features two “mouse” buttons without clickpad support (where the entire trackpad clicks). Because the keyboard features a 10-key number pad, the trackpad is correctly offset and centered on the Y button. It’s fairly smooth but with a slight metallic drag to its surface. It’s also Microsoft Precision driver-compatible, so you get the full complement of Windows 10 gestures.

The keyboard is Steel Series-branded and is a fairly pleasant experience with decent travel. It is slightly mushy and doesn’t feature much tactile click, but hey, it’s a laptop keyboard, right? It features per-key RGB backlighting, and the key skirts are translucent to accentuate the lighting. The lighting is decent, but not dazzling along the lines of say, Razer’s keyboards. Like Las Vegas, it’s way cooler at night.

One complaint we have: The 10-key is styled after a phone 10-key, not the more favored calculator 10-key, which would correctly place the 0 key under your right thumb when entering in numbers.

MSI claims the GE65 Raider features “Giant Speakers,” which seems to mean 5X larger chambers, along with a total of four speakers. We listened to several songs on YouTube (because that’s where people get music today) on the GE65 Raider, comparing it to HP’s Omen 2XS and Dell’s XPS 15. We found all to be, well, decent for a laptop. The GE65 Raider had a slight edge in bass response but also tended to be thin mid-range. Frankly, a decent Bluetooth portable speaker probably sounds better than all three laptops to our ears.

Don’t be disappointed too much—there’s only so much space you have to work with and these are performance laptops, not boomboxes to sling over your shoulder. Let’s just say the GE65 Raider sounds better than thinner and smaller laptops and be happy with it.

Our first test is Maxon’s Cinebench R15. It’s a popular benchmark to measure CPU performance by rendering a 3D model. While few people actually do 3D modeling, the test scales very well with CPU core count, which means the more cores you feed it, the higher the score. Also, it lets us test a system’s performance on a single thread (core) or multi-threaded.

Starting with multi-threaded performance: Against every single 6-core Intel CPU, the Core i9-9880H in the GE65 can’t be touched. The GE65 Raider also comes in just ahead of the 8-core Ryzen 7-based Predator Helios 500.

What the GE65 Raider can’t compete with are the large-bodied gaming laptops such as the Acer Predator Helios 700 with the same CPU but more cooling and power, or the Alienware Area 51m, which uses a desktop 8-core Core i9-9900K inside. A mid-size laptop losing to large laptops isn’t much of a surprise, but the GE65 also slightly underperforms against the Dell XPS 15 with the same CPU too.

Why? Well, there’s more nuance here, which we’ll explain in our HandBrake section, but it’s probably easier to understand that the XPS 15 is made for shorter sprints of multi-core performance.

If you want to know how most mainstream applications will perform, running Cinebench in single-threaded mode can give you a good idea. This measures the same workload, but using a single CPU core. Most tasks such as Office work, web browsing, and even photo tasks typically use a single thread.

For the most part, it’s a fairly close. The Core i9-9880H CPUs have small clock speed advantage, so they outperform 9th-gen 6-core Intel chips by about 5 percent. Against 8th gen 6-core Intel chips, you’re looking at about an 11 percent advantage. If you keep hearing that there’s been “no change” between generations of Intel CPUs from the peanut gallery, note that the difference between a 7th-gen quad-core and a 9th-gen 8-core is about 29 percent in single-core performance. Of course, it’s about 115 percent in multi-core performance.

One issue with using Cinebench R15 as the only way to measure a laptop’s performance is its short duration. A multi-core run might take just a minute or two at most. That’s not really enough to heat up a laptop, so we also use an older version of the free HandBrake utility to encode a 30GB file using the Android Tablet preset. The task can take as long as 45 minutes on a 7th-gen quad-core laptop, and about 24 minutes on an 8-core laptop. As Handbrake is multi-threaded, that means the CPU heats up long enough that we see the impact as it reaches its thermal limit.

While the Dell XPS 15 outperformed the GE65 Raider in the short Cinebench test, once we subjected both to a marathon, and not a sprint, the GE65 Raider’s thicker chassis and better cooling power allowed it to finish far ahead of the XPS 15. The GE65 is outperformed only by the thicker and larger laptops.

The other half of the GE65 Raider’s appeal is its GPU. Our configuration included Nvidia’s GeForce RTX 2070. It’s nicknamed “Max P” by industry insiders because it’s the version that runs at the GPU’s maximum clocks or “maximum performance,” because the laptop has the thermals to handle it. Nvidia doesn’t like calling it “Max P” since it highlights just how compromised “Max Q” laptops can be in performance sometimes.

3DMark FireStrike, however, is fairly old at this point and measures only DirectX 11 performance. To see how the laptop performs in DirectX 12, we run 3DMark Time Spy. Again, we focus in on just the GPU performance. While the older gen GeForce GTX 1080 in a large Alienware outpaces the GE65 Raider in DX11 performance, the script is flipped here, with the RTX 2070 in front of the GTX 1080. The only laptops faster than the GE65 Raider are based on RTX 2080 cards, so no real shame at all.

Our last test using 3DMark is the Port Royal test, which measures GPU performance in Microsoft’s DirectX Raytracing API. Again, only laptops based on the RTX 2080 can beat the GE65 Raider. We do again see that the GeForce RTX 2080 Max-Q variants pale in comparison.

We also run real-world games. First up is Rise of the Tomb Raider set to its Very High setting at 1080p resolution and in DX11 mode.

Just as we saw in FireStrike, the older GeForce GTX 1080 parts spring back into the mix under DX11 games. One thing you may notice in the chart below: The only laptops that outpace the GE65 Raider are 17-inch laptops, which tend to have more space to work with for thermals.

The last game we ran was Middle-earth: Shadow of Mordor set to Ultra and at 1080p resolution. We didn’t have the Acer Predator Helios 700 in these results but overall, the GE65 Raider represents well. It is essentially as fast as very high-clocked GeForce GTX 1080 laptops that are larger and thicker.

Battery life means more on today’s gaming laptops, as more people demand it and more models offer better-than-token efforts. For our test, we loop a 4K video with the display set at about 250 nits’ brightness (a good setting for daytime interior environments) and plug in a pair of earbuds. We also set the laptop to airplane mode and turn off the RGB keyboard features.

Battery life is typically dictated by the size of the battery plus all of the hardware that’s running. Another major factor for gaming laptops specifically is whether the laptop uses Nvidia’s G-Sync. G-Sync requires the GPU to be connected to the display, which means the discrete GPU and its RAM are turned on the whole time.

The GE65 Raider, interestingly, doesn’t include G-Sync despite its use of a 240Hz panel. The high refresh means very low latency and very little visible tearing, because redraws are happening at three times the rate of a 60Hz panel.

The GE65 Raider ran just over 4.5 hours before going dark. Its sibling, the GS65 Stealth, ran just over 6 hours with its 80Whr battery. In the end we’d rate it as not great, but not terrible either.

Overall, we’d have to say there’s a lot to like in the GE65. The main highlight is the 8-core Core i9-9880H, which offers a significant performance increase over previous chips. Against a 6-core 8th-gen, you’re looking at about a 57-percent increase in performance.

More significantly: If you’re upgrading from a quad-core 7th-gen Core i7 chip, you’re in the ballpark of a 118 percent uptick in multi-threaded workloads. So yes, worth it if that’s your jam.

On graphics or gaming, the GE65 and its GeForce RTX 2070 punches out of its weight class and genuinely makes us wonder whether the thinner GeForce RTX 2080 Max Q are worth the tradeoff—especially since the GE65 Raider really isn’t that much larger or thicker than most Max-Q laptops.

The only serious compromise here is the battery. A longer run time would have made the GE65 perfect (and likely thicker). Still, if you want a lot of performance in a compact laptop and are willing to give on battery life, the GE65 Raider should be on your short list.