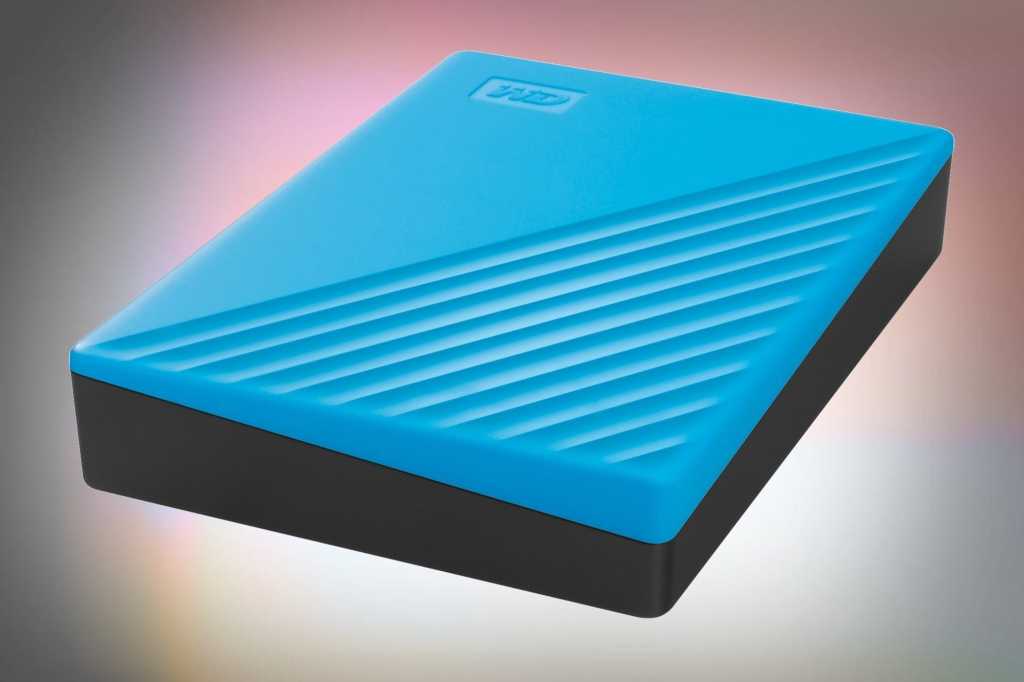 This drive is more about capacity, price per gigabyte, and style than speed, though it’s still a decent performer. We can’t argue with 5TB or the capable software bundle, and you should be able to find the drive at a discount.

WD’s My Passport external 2.5-inch USB 3.0 hard drive is now available in up to 5TB in capacity, which means you can stuff even more data in your pocket than with the last iteration. At $150 retail, you pay $30 more than the previous top-capacity 4TB unit, but that’s the same price as its Seagate Expansion rival, as well as one-fifth the price per gigabyte of SSDs.

This review is part of our roundup of best external drives. Go there for details on competing products and how we tested them.

The 5TB My Passport measures 4.22 x 2.95 x 0.75 inches and weighs 0.46 pounds. It’s also available in 1TB, 2TB, and 4TB capacities, with the 1TB and 2TB versions being thinner at 0.44 inches and weighing only 0.27 pounds. All capacities carry a three-year warranty. (Note that if this drive is like other WD My Passports, you’ll likely find a decent discount if you shop around.)

The My Passport ships in three hues: black, blue, and red. That’s three fewer than the last iteration, which also came in white, orange, and yellow. I miss the other colors, and so will anyone who was rotating them daily for backups. That might actually be no one, but…

The latest My Passport Drives have a nice angled two-tone color scheme with one half of the top scalloped for grip. At least that’s my interpretation of the motivation. Grip is somewhat increased because of the matte finish. In the overall scheme of things, grip is more important than a flashy sheen, as dropping your hard drive on a hard surface could ruin your whole day.

On the business end of the drive you’ll find a powered micro-B USB port and power indicator. The drive is Gen 1 5Gbps, but supports the USB 3.2 feature set. Just in case you were wondering, Gen 2 10Gbps USB would needlessly increase cost, as Gen 1 offers more than enough bandwidth for any hard drive setup that’s not using RAID 0 or another striped format.

For Mac users, there’s a version (formatted in HFS+) of the My Passport rendered in “midnight blue.” It’s $10 more, but ships with a micro-B to Type-C cable in addition to the regular version’s micro-B to Type-A.

WD includes a nice suite of software tools for backing up, encrypting data, and taking care of formatting and other drive-related chores.

You can download all of it from WD’s site if for some reason it’s not on the drive or you accidentally format over it.

While the WD My Passport is affordable and offers lots of capacity, it’s not a top performer. CrystalDiskMark rates it as improved over the My Passport X, but that didn’t bear out in our real-world copies. Overall it was average at these, but for some reason, the drive was very slow in the small file and folder write test.

No test rated it on a par with drives such as the Seagate Backup Plus Ultra Touch or the G-Drive mobile USB-C from G-Technology (Western Digital’s boutique brand) though the My Passport did turn in unusually fast CrystalDiskmark queued 4K write scores of 10MBps or more. No other external drive we’ve tested goes much faster than 1MBps. This may be the USB 3.2 spec, but those 4K write scores didn’t match up with the aforementioned real-world 48GB file and folder write test. Just on a guess; because the driver doesn’t queue writes.

Note that the My Passport arrived formatted in NTFS rather than the customary exFAT. Both of these file systems offer good read and write speeds with large files, but NTFS is noticeably faster writing small files. As a matter of course, if a drive is formatted in exFAT we reformat to NTFS for testing.

The My Passport (2019) scores are the top bars in the darker blue.

As you can see above, CrystalDiskMark thinks more highly of the latest My Passport than the older X. However, the real-world 48GB copies, shown below, tell a different story.

I’ve had two My Passports in regular use for a couple of years, along with a variety of competing external hard drives. My only consideration for which to use is how much space is available. If I need speed, I opt for an SSD.

A worthy choice for most users

The WD My Passport now offers as much capacity as its leading competitor, is attractive, and comes with a nice software bundle. If speed is paramount, buy something else—ideally an SSD. If it isn’t, then the My Passport is a more than worthy product for the average user.