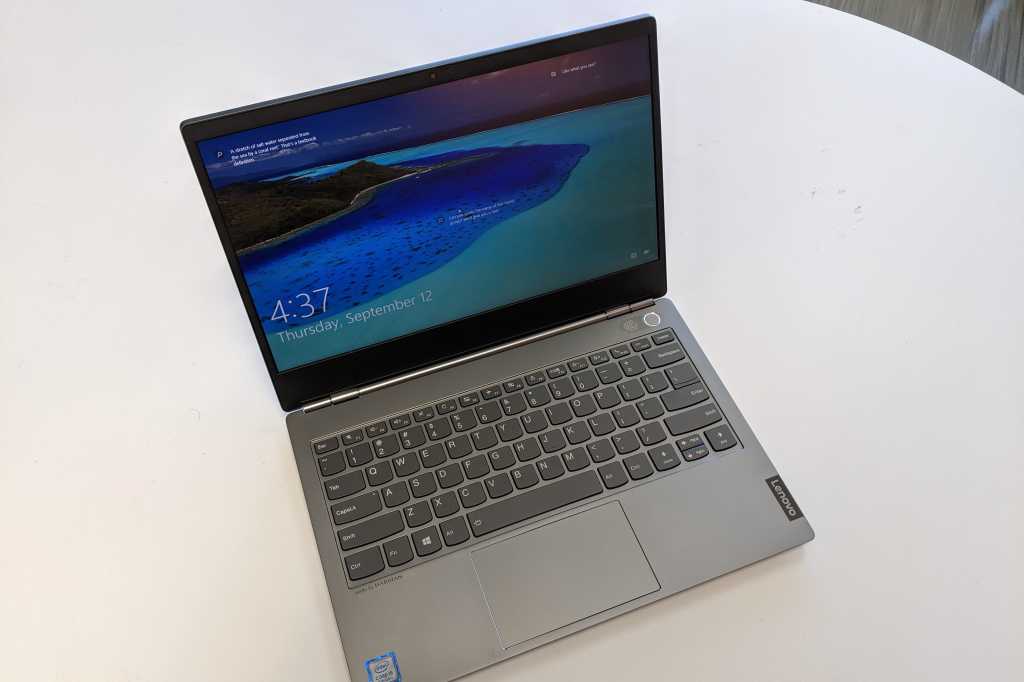 Mark Hachman/IDG
At a Glance

Lenovo tweaks its business notebook PC platform with consumer-friendly touches, such as a robust audio experience.

Lenovo’s ThinkBook 13s is a deliberately intriguing combination of a business notebook with consumer flourishes, aimed at the vaguely-defined space between a home business and a more traditional consumer PC. It largely succeeds.

The ThinkBook 13s (also known as the ThinkBook 13s-IWL) sacrifices just a bit on the performance front for including an 8th-gen Whiskey Lake processor, but places it inside a sturdy chassis with a very good keyboard on top. It includes a combination of legacy USB-A and forward-looking USB-C ports, an excellent audio system, with decent battery life. And at a price hovering between $700 to $800, you’re left with a pretty solid midrange laptop for general use.

Lenovo claims that the suggested retail price of the Lenovo ThinkBook 13s we tested is over $1,100, but we couldn’t find a single price suggesting it was over $1,000. Online, the prices we saw at press time averaged about $800 or slightly less, and should eventually fall. Otherwise, there’s a healthy mix of features catering to consumers and small businesses.

Lenovo’s ThinkBook 13s manages to exude an aura of stability while still not breaking your back. It’s chunky, though not overly heavy. Officially, it’s made of aluminum and magnesium metal and sports a Mineral Grey finish, with a zinc-alloy hinge. I couldn’t discern any keyboard flex, and the display steadfastly refused to flop about while shaking it.

While it’s not a 2-in-1, the attractive IPS display folds back flat. Total luminosity is 301 nits maximum, close to but exceeding the 250-260 nits we consider appropriate for daily use. Note that our review model was not equipped with a touchscreen.

A generous vent underneath the chassis helps pull air from the outside, venting it out through the back of the chassis via a small grille running along one half of the hinge’s length. I did notice a slight fan whine while it was running, which can kick in—though very quietly—even during mundane, innocuous tasks such as typing this sentence.

Officially, the ThinkBook 13s is built to withstand dousing with up to 2 ounces of water, extreme temperatures, and vibrations. (We didn’t test any of those claims.) The hinge has been tested for up to 25,000 open-close cycles, Lenovo says—about 8 times per day for 8 years.

A practical number of ports split the difference between the consumer and business user. On the left, there’s a plain-jane USB-C 3.1 Gen 2 port, (without Thunderbolt capabilities) a full-size HDMI 1.4b port, a headphone/mic 3.5mm jack, as well as a proprietary power plug—one of the only slightly disappointing features on the ThinkBook 13s. On the right, Lenovo has include a pair of USB 3.1 Type A ports, managing the transition between the Type A and Type C generations. One of the Type A ports is labeled with a small battery, alerting you that it can be used to charge a phone or other device, even while the laptop is otherwise powered off. Lenovo doesn’t pack in any adapter dongles within the ThinkBook box.

Lenovo is known for its keyboards, and typing on the ThinkBook keyboard was comfortable enough. The keys are resilient and springy, though without much travel—I prefer the deeper keyboards found on the ThinkPad series. Note that the function keys were designed with an eye toward privacy: There are dedicated buttons to disable the webcam and mic, as well as the trackpad. Interestingly, the ThinkBook 13s also has  dedicated calling keys for Skype.

There’s no Windows Hello-certified webcam, but there is a certified fingerprint reader hidden beneath the power button. In my experience, Huawei’s fingerprint readers do a great job of detecting your fingerprint and logging you in, but the ThinkBook’s identification capabilities were equally robust over the few days I spent testing the laptop.

As for that webcam—well, even though there’s a keyboard button to turn it off, Lenovo goes the extra mile. Just above the cutout for the camera lens is a tiny, almost imperceptible version of the ThinkShutter slider that can easily be slid closed or open to physically reveal or conceal the lens. A tiny red dot visually signals when it’s blocked, though it’s so small, against the glare of the screen those of you with poorer vision may be unable to tell. Perhaps a brighter shade of paint might solve the problem? In any event, the webcam is a fixed-focus 720p camera, just serviceable enough for Skype calls.

The audio experience that the Lenovo ThinkBook 13s delivers is surprisingly good. The speakers produce a strident, full-throated range of sound that’s excellent in the midrange and not too shabby on the lower end, either. In testing the ThinkBook 13s against my normal range of streamed YouTube music and other prerecorded samples, there were several occasions that I simply leaned back and enjoyed the music. The ThinkBook 13s builds in Harman speakers that are enhanced by Dolby Audio, turned on by default. There aren’t any presets for rock, pop, and the like, though the Dolby algorithm itself seems to understand and adjust. This may be an inexpensive notebook aimed at small businesses, but the audio was definitely designed with the consumer in mind.

Lenovo can’t quite get away from the usual mix of Windows bloatware and third-party apps. But one real plus is the Lenovo Vantage app, which provides comprehensive tools for updating the BIOS software and other system apps, and fine-tuning other system functions. Business and consumer users alike will appreciate its detailed explanations and controls. Some of the functionality is reproduced elsewhere in the Windows 10 Settings menu, but it’s still a good starting point to explore the nooks and crannies of the ThinkBook 13s.

It’s worth noting that while the ThinkBook 13s shipped with the Windows 10 October 2018 Update installed, Microsoft almost immediately pushed the April 2019 Update (version 1903) to the laptop as part of its daily updates. We accepted it, and tested the laptop using the April Update.

Notebook buyers will have to step a bit gingerly though the logjam of not one but three competing Core processors, all shipping this holiday season and all competing for your dollars: Intel’s two 10th-gen Core chips, code-named Ice Lake and Comet Lake, will be selling alongside the more established (and still worthy) Whiskey Lake 8th-gen chips. (At press time, we didn’t have any to test.)

Though the 10th-gen chips offer some performance and graphics advantages, they’re really more well-rounded platforms. Nice if you can afford them, but don’t discount a Whiskey Lake platform like the the ThinkBook 13s because it doesn’t sport the latest label.

It’s important to place these results into the proper perspective. Many of the notebooks we test are consumer PCs, some with high price tags attached. We compared the Lenovo ThinkBook 13s to a variety of the consumer and business machines, weighted more toward the consumer market. Pay attention to where the ThinkBook 13s places—though its results are middling overall, its absolute scores aren’t bad. And for the price, it may be worth a purchase.

Historically, PCMark 8’s suite (Work, Home, and Creative) offers a range of applications tests, from general office work (word processing and spreadsheet calculations) to VoIP calls, image manipulation, light gaming, and even some video editing. PCMark 10 modernizes all of these tests, and combines them into a single overall benchmark.

For simplicity’s sake, we’ve provided the PCMark 8 Work and Creative tests below, comparing the ThinkBook 13s to some of its competitors. It fares pretty well.

While PCMark attempts to simulate real-world tests, the Cinebench test is synthesized. Cinebench appears in two versions, each rendering a scene using Maxon’s rendering engine. The difference between the two tests (R15 and R20) depends on the complexity of the scene, with the R20 test being the more difficult of the two. We’ve used the older R15 test for our comparison.

The open-source HandBrake tool is a prolonged CPU test that transcodes a Hollywood movie into a format suitable for watching on an Android tablet. Though it’s possible that more and more people are watching movies on their laptops, it’s still a practical task that shows how a prolonged activity stresses the CPU on the ThinkBook 13s.

Don’t expect to play many quick, action-oriented games on Lenovo’s business-consumer notebook, because of the integrated graphics. There’s an enormous cluster of laptops which all use the UHD 620 chipset, which will be good for some basic, older games. Still, if you’re willing to dial down the details, you can probably still have good experiences on Fallout 4, for example, or Batman Arkham: Origins, neither of which are especially ancient.

Finally, there’s battery life, one of the more important measures of a laptop. The ThinkBook13s fares pretty well here with just over 10 hours, about enough for a day of work and then some. (To test, we take a 4K movie and loop it over and over until the battery expires.) Some of the consumer laptops pull in much higher numbers, but laptop manufactures have begun taking advantage of low-power displays that extend battery life further.

While Lenovo’s ThinkPad X1 Carbon 6th-Gen remains the superior business notebook in Lenovo’s stable, the MSRP is well over $1,000. (Prices on the base models have fallen to $999, as the 7th-Gen models have begun to ship.) It’s probably worth considering picking up a deal on the older X1 Carbon generation as well as considering the new ThinkBooks.

There’s a lot to like about Lenovo’s consumer-business hybrid, though. Save for a lack of a dedicated ethernet port, there’s a business-friendly mix of connectivity options, and good battery life, with consumer-friendly multimedia options. Though the performance is relatively average, being able to buy the ThinkBook 13s at an affordable price helps elevate it. So pay attention: if the price is close to MSRP, look elsewhere. At prices near the $800 or so that Lenovo is currently charging, the ThinkBook 13s is a solidly well-rounded notebook that we’d recommend buying.