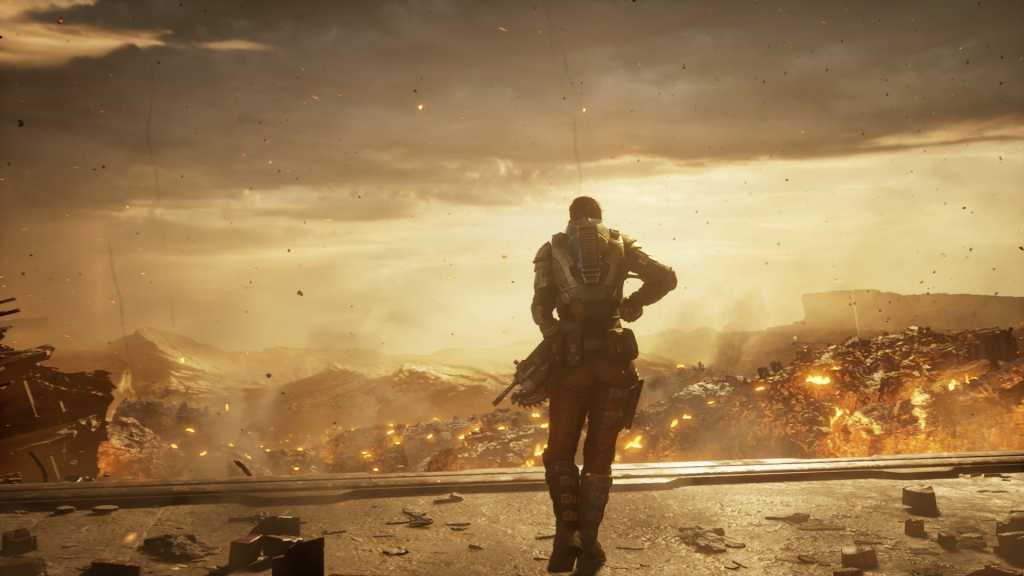 It’s just another Gears game, but a more charismatic protagonist and a few experimental mechanics at least give the series a more firm footing going forward.

Gears 5 starts with a “Previously on…” recap, and that’s when I realized I remembered absolutely nothing about Gears of War 4. I played it. I reviewed it. Judging by the review I wrote at the time, I vaguely enjoyed it.

But I don’t remember it.

If nothing else, I think Gears 5 will escape that fate. While Gears of War still feels like a series casting about for an identity, one that could’ve (and maybe should’ve) died with the Xbox 360 era, Gears 5 at least makes an honest effort at finding a way forward. It stumbles occasionally, sure, but the seeds of future reinvention are here.

The first of those seeds? After a brief introduction, Gears 5 sidelines spicy-as-ketchup protagonist JD Fenix in favor of Gears of War 4 companion Kait. She’s still no Marcus Fenix, but nor is she trying to be—and maybe that’s why it works. JD was always going to be compared unfavorably to his father, the face of the series for almost a decade. Sure, it didn’t help that JD had all the personality of a mannequin, but if we’re honest he was doomed before he opened his mouth.

Kait doesn’t live in Marcus’s shadow. Not as much, at least. She was ostensibly a sidekick in Gears 4, and yet the story revolved around her anyway. She was having mysterious visions. She was connected in some way to the Swarm—and perhaps the Locusts as well. Hell, she killed her own mother to stop the formation of a new Swarm Queen. She was interesting. Kait doesn’t need to justify taking Marcus’s place, let alone JD’s. She already made a good argument last time.

So Gears 5 gives JD a five-chapter send-off and then pretty much writes him out of the story. Don’t cry for him, New Ephyra.

There’s no time for tears anyway. The Swarm threat looms. What was once an isolated problem now batters the COG settlements, eerily reminiscent of the all-out war waged decades earlier. And as the threat grows, so does Kait’s connection to the Swarm. She and Del (a.k.a. the other charismatic sidekick from Gears of War 4) are forced to leave the relative safety of New Ephyra to try and figure out what her visions mean. Is Kait a threat? A weapon? And what is her connection to the dead Locust Queen Myrrah?

The answers are pretty predictable, but the journey to find them less so—which brings us to change number two, the fact that Gears 5 has gone open-world.

Well, sort of. Acts II and III (out of four total) both adopt a hub-and-spoke structure, the first at the foot of the snowy Mount Kadar, the second in the red-sand desert of Vasgar. They’re stunning locales, and refreshingly different for Gears. We of course visited Mount Kadar way back in Gears of War 2 but that version was all springtime mud and evergreens. This reprisal is a marvel, frozen lakes and glacial chasms swallowing the remains of the New Hope Research Facility and its various outbuildings. It’s a great throwback to one of the original trilogy’s best setpieces.

Vasgar is the highlight of Gears 5 though. After ten years and five games we’ve still seen precious little of the Gears world outside of COG territory. In light of that, Vasgar feels like a revelation. Once a seaside resort region controlled by the Soviet-like UIR, ruins of old cargo ships and docks now poke up from a vast desert beset by perpetual lightning storms.

Gears 5 didn’t need to be open-world though.

I can hardly fault them for trying. Gears of War has always been a Point-A-to-B series, relentlessly linear and tightly paced. That style’s fallen out of fashion though—or worse, become old-fashioned. Look around at the current landscape and it’s not hard to see why Gears broadened its horizons a bit.

But Gears 5 doesn’t justify the transition. Mount Kadar and Vasgar aren’t really open worlds. They’re fancy level select screens, vast empty areas you’re forced to traverse—often for minutes at a time—to reach the next shooting gallery. No enemies patrol the wastelands between, nor are there many secrets to discover. Nearly every point of interest, save for one or two collectibles per area, is quite literally flagged with a giant flagpole to say “Hey, here’s the Gears you know and love.” Waist-high walls, chunky shooting, maybe even a turret sequence. You know, Gears of War.

Some of these flagged spokes are “Side Missions,” smaller encounters that couldn’t survive as standalone levels—one or two rooms, a combat sequence, maybe a collectible. They wouldn’t be very interesting on their own.

Problem is, they’re not much better in context either. Gears 5 is still a fairly linear series of main missions, only now those main missions are padded out with short and ultimately pointless asides.

Strip away the filler and you’d have a better game, because Gears 5 can be wildly creative at times—especially when compared with the straightforward stop-and-pop of Gears of War 4. One particularly memorable sequence pits you against enemies on a frozen lake. Shoot the ice and your foes plunge through into the depths and drown, though of course the same hazard can be turned against you if you’re not careful.

There’s a glimpse of the old Gears of War magic in these moments, that “Wow, I’ve never seen that done before” joy that made the original trilogy so exciting. The high points in Gears 5 are some of the highest in the series.

That feeling only ever occurs in the core story missions though. Outside of that, Gears 5 feels like an old series struggling to accommodate new ideas because…well, that’s exactly what it is. And while that experimentation might prove valuable for Gears 6 and beyond, it drags Gears 5 down. It’s no longer the hard-driving action series of the past, but nor is it fully transformed into a freeform sandbox.

That said, after Gears of War 4 I didn’t care what might happen in Gears 5. Now, I’m at least curious to see how Gears 6 plays out. I’m calling that a win, no matter how narrow.

My interest is mostly due to Gears 5 nailing what Gears of War 4 didn’t, though. Better main character, more unique environments, and a few new wrinkles for the well-worn cover shooter combat. I’d take another wholly linear Gears game if it were done to the same level of quality exhibited here. No need for further open-world experiments.

Do I think that’s likely? Absolutely not. I expect Gears 6 will continue down this road, on a larger scale even. I only hope it doesn’t lose itself in the process.