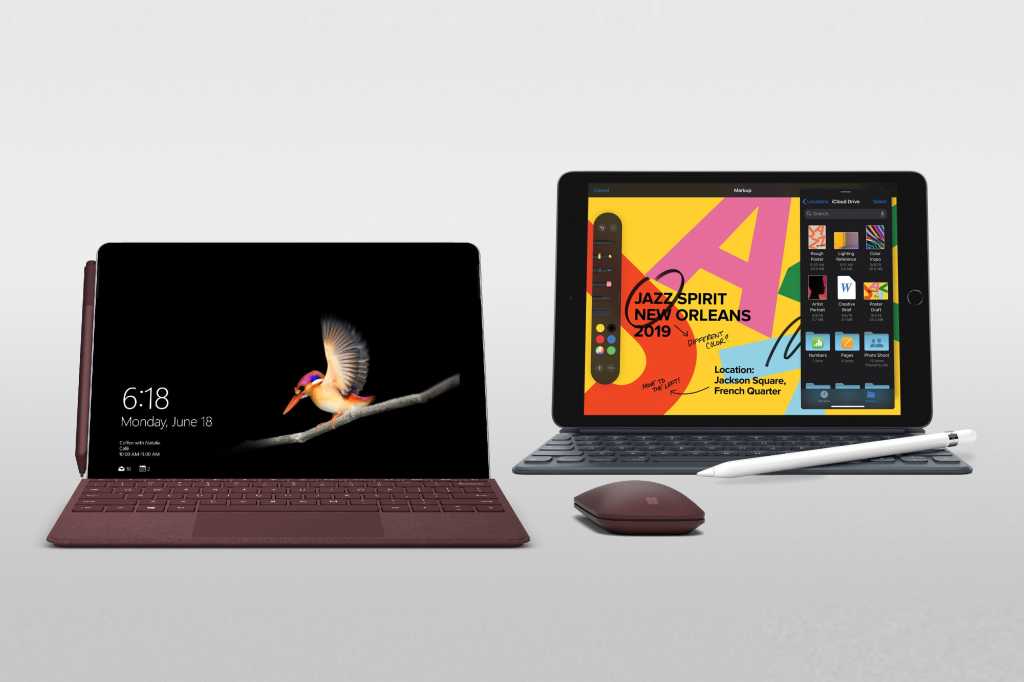 In about a month’s time, Microsoft may unveil the next generation of its year-old, entry-level Windows tablet, the Surface Go. For now, however, Apple has fired the first shot: a $329 10.2-inch iPad that offers a lot of what the Surface Go does, and for slightly less.

While many Microsoft Surface tablets feel bulky when detached from their Type Cover keyboards, the $399 Surface Go does not. However, it’s also powered by a somewhat poky Intel Pentium Gold processor, while Apple’s latest iPad has its optimized A10 Fusion chip under the hood. It’s not that much different than the Apple 9.7-inch iPad (2018), though. The iPad also makes the camera a focus, though you’ll look slightly ridiculous taking photos using any tablet, Apple or Windows.

Of course, there’s a vast gulf between Windows 10’s tablet mode and Apple’s iPadOS, which now powers the iPad. (For more iPad coverage, see Macworld’s story.) Your preference of app and operating system will probably be the determining factor in making your choice, but let’s compare some of the key specs.

It’s the last line of the Surface Go specs that’s important: the price—or, more importantly, the discounts that Microsoft and retailers are offering before the Surface event at the beginning of October. That brings the prices of both machines almost into parity.

We can make a strong claim that, right now, the Apple iPad outperforms the Surface Go. According to Macworld’s 9.7-inch iPad (2018) review, the A10 chip within that iPad, as well as the latest model, scored 3463 on Geekbench’s single-core CPU test and 5845 on the multi-core test. The Surface Go, on the other hand, barely breaks 2200 on the single-core test, and scores about 4000 or so, max, on the multi-core test. Though it’s very possible that a new Surface Go will make up ground and then some, the edge right now goes to the iPad.

You can break this down in a couple of different ways. As a naked tablet, the Surface Go and iPad are both comfortable to hold and to use. (At press time, we haven’t had a chance to handle the new 10.2 inch version.) From strictly a hardware perspective, though, they’re about equal.

When you start adding peripherals, however—the Apple Smart Keyboard and the Apple Pencil, versus the Surface Go’s pen and Type Cover—the edge starts moving to Microsoft’s corner. While the Apple Smart Keyboard can be folded back into a stand, the Surface Go’s kickstand is still clearly superior. We’re willing to buy Apple’s claims about e-ink latency and so forth at face value, but Apple’s going to have a difficult time convincing anyone that the Pencil is the differentiating factor.

Unfortunately, both keyboards have their weaknesses. The Surface Go shaves 0.5mm of key travel off its other Type Covers, with just 1mm of travel. Apple’s keyboard, on the other hand, forgoes backlighting and sits absolutely flat.

From an OS standpoint, we still believe in Microsoft. iPadOS now has better support for multitasking, for example, with Split View. But Microsoft offers virtual desktops, a more useful way in adding more apps to a tablet’s tiny screen. In fairness, however, Apple offers picture-in-picture mode, which Windows 10 does not.

We still say that it’s ridiculous to take pictures with a tablet—any tablet. But the advantage in terms of multimedia consumption falls squarely in the Apple iPad’s corner. Not only is the camera far, far better, but the numerous apps and games that are optimized for the iPad elevate it far above the Surface Go.

Note, though, that streaming apps like Netflix appear on both platforms. And with the Surface Go, you don’t have to constantly hold it—the Surface Go’s built-in kickstand comfortably supports it.

Microsoft’s always aimed the Surface Go at road warriors who need a browser, Office, and not much else. Apple, unquestionably offers a richer app environment, in addition to the Office apps that straddle both platforms. We’d argue that there’s a richer ecosystem of browsers and utilities within the Windows platform, though it’s highly unlikely you’ll be running Photoshop on either an iPad or a Surface Go.

But iOS itself offers a far richer ecosystem of both native Apple apps as well as third-party software. On either platform, however, you’ll be not doing much besides light editing and content creation. Content consumption is still largely the focus of the iPad.

It’s also worth noting that the Surface Go ships with Windows 10 in S Mode activated, which restricts you to running the limited apps available in the Microsoft Store, though you can opt to switch to the full version of Windows 10.

Conclusion: On paper, the iPad wins

This is an unfair fight: Apple’s just-introduced iPad is taking on a year-old product in the Surface Go. In early October, Microsoft will have it chance to answer back. Will it be enough to usurp the iPad? We’ll have to wait and see.