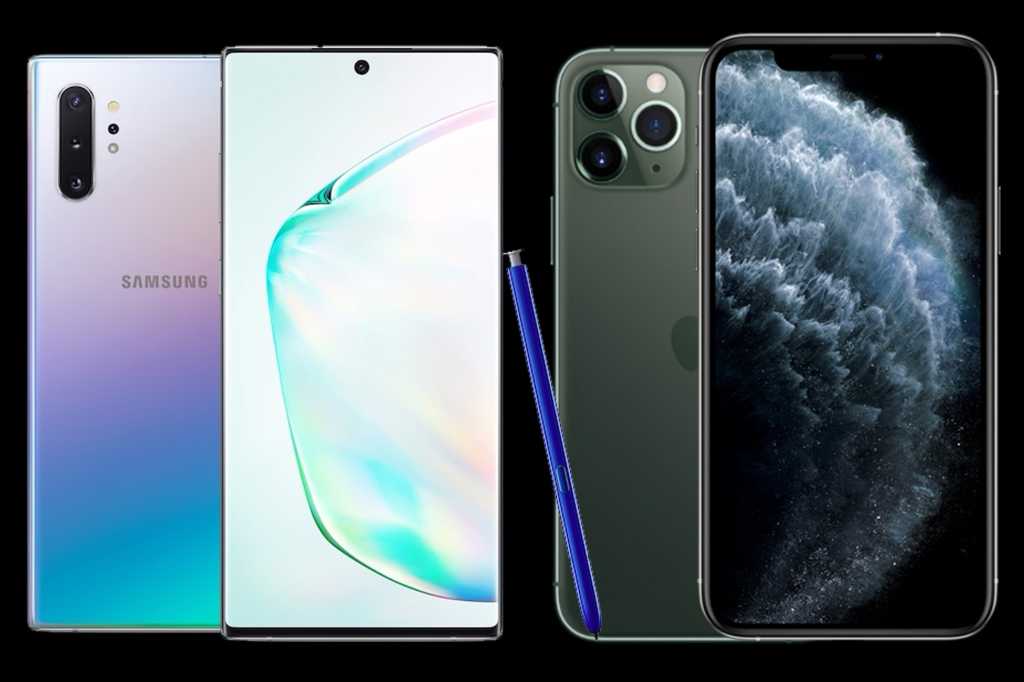 No matter which side you’re on, there’s no denying that the iPhone 11 Pro Max and the Galaxy Note 10+ are amazing. With giant screens, cutting-edge cameras, and gorgeous designs, they just might be the best phones ever made, and they’ve got sky-high price tags to match. So before you plunk down four figures for the pleasure of owning one, you should know which one is right for you. We’ve broken it down feature by feature below.

It’s been only two years since Apple unveiled the iPhone X to much fanfare, dumping the home button and ushering in a whole new design language for the iPhone. It’s not bad that Apple has decided to stick with it for another year, and the 11 Pro offers some fresh ideas like its square camera array and single-glass construction. But after a slew of notched copycats, the language is already starting to feel a little stale.

Samsung, on the other hand, has introduced a stunning new design with the Galaxy Note 10+. The top and bottom bezels have been slimmed dramatically, to the point where the camera won’t even fit. So now there’s a small hole in the top of the screen (which looks a lot better than it sounds), and the whole package is actually as compact as the Note 9, despite having nearly a half-inch more screen. Winner: Galaxy Note 10+

If you like big phones, you’ll love either of these handsets. With a 6.5-inch screen on the iPhone 11 Pro Max and a 6.7-inch display on the Note 10+, neither is very conducive to one-handed operation:

While they look extremely similar on paper, however, the iPhone 11 Pro Max is a bit easier to hold. The 5mm reduction in height, as well as its “flat” design, stands in surprising contrast to the Note 10+’s infinity screen and ultra-tall body. Winner: iPhone 11 Pro Max

This one’s as close to a toss-up as you’re going to get. Because Samsung is supplying the display for both the Note 10+ and the iPhone, you’d need a microscope to see any difference between them.

But Samsung does a better job of going beyond the pixels with the Note 10+. Not only do you get precise control over the color temperature, you can also adjust the resolution from Quad HD to Full HD. With Apple, what you see is what you get—but to be fair, the calibration is usually pretty perfect. Winner: Tie 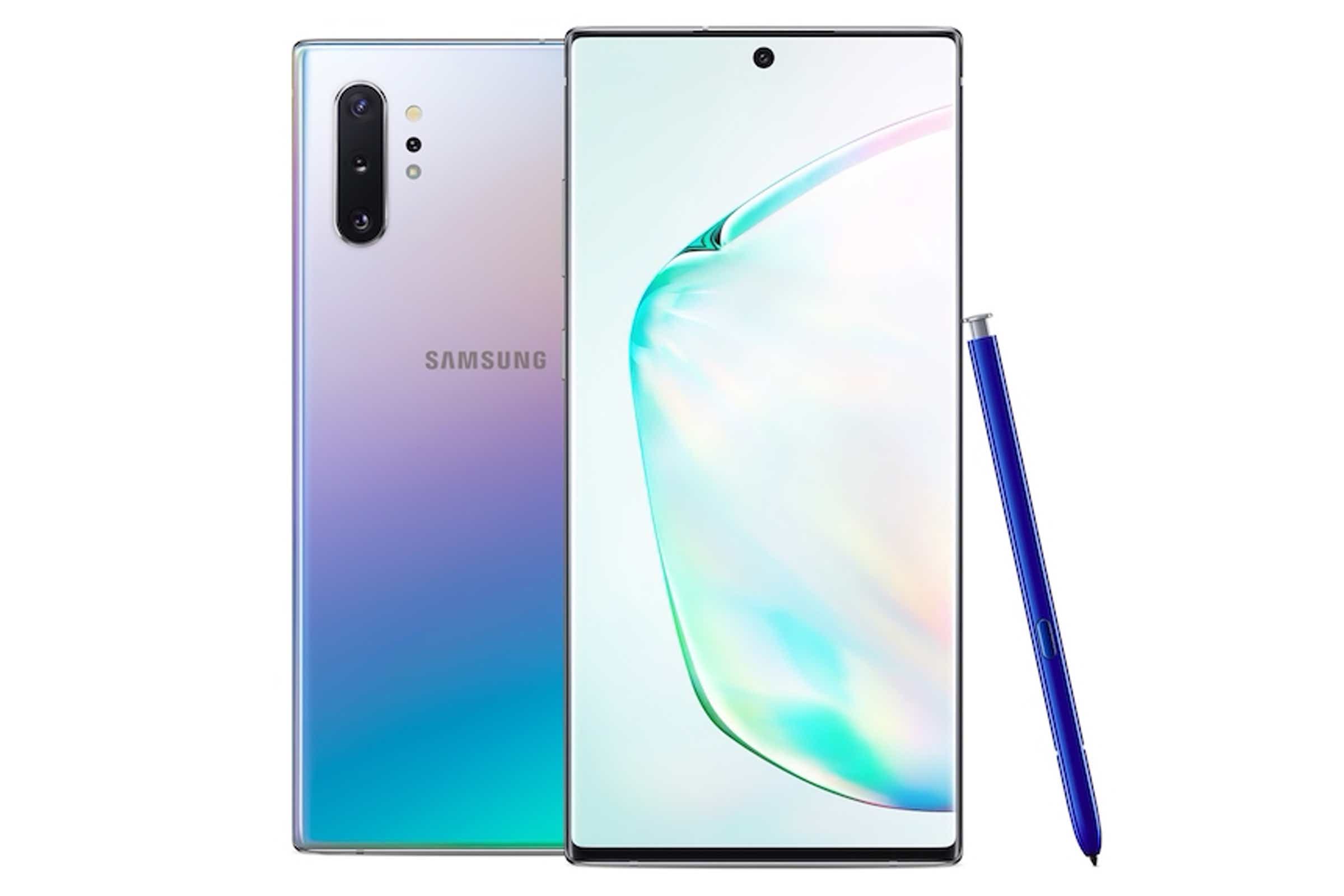 Both phones offer extremely fast and powerful processors. The Galaxy Note 10+ brings the Snapdragon 855, and the iPhone 11 Pro Max is powered by the brand-new A13 Bionic. Both processors are built using a 7nm process for extreme power efficiency, and they both have a neural engine on board for AI-related tasks.

As far as speeds go, Apple didn’t divulge how much faster the A13 is, other than to say it’s “the fastest CPU and GPU in a smartphone.” Considering the A12 Bionic outpaced the Snapdragon 855, that’s believable, but speed certainly won’t be an issue with either of these phones. Winner: iPhone 11 Pro Max (on paper)

Here’s where things start to get interesting. Both phones feature three main cameras, with the Note 10+ adding a fourth time-of-flight sensor for depth perception.

While the camera array is similar on each phone, the way they work isn’t. Apple puts greater emphasis on its ultra-wide lens, snapping simultaneous photos with it and the wide lens so you can choose your favorite. There’s also a new night mode on both phones, which wasn’t so successful in our testing of the Note 10+, and some fancy HDR processing. We’ll have to wait until we can properly test the iPhone 11 to declare a winner, but you can bet that both phones will take great pics. Winner: TBD

You’ll be able to fast-charge both phones using the supplied power adapter, but the Note 10+ has a trick up its sleeve that the iPhone 11 Pro doesn’t: 45W Superfast charging. With a compatible charger, you can charge your Note faster than any other phone you can buy. That probably won’t mean much in your day-to-day charging patterns, but if you’re pressed for time and need to grab as much juice as possible, the Note 10+’s charging capabilities will be a life-saver.

Another difference between the phones is wireless. Or rather, reverse wireless charging. While you can pop either phone on a Qi charger to fill it up, only the Note 10+ can double as its own charging pad. That’s good for charging Galaxy Buds or your buddy’s iPhone 11 Pro Max. Or not–that’s up to you. Winner: Galaxy Note 10+

The Note 10’s reason for being has basically always been the on-board S Pen, and the Note 10+ drives that point home. Not only does the S Pen take notes on the screen, you can also use it to draw in the air thanks to AR Doodles, and use it as a remote for the camera, music player, and other apps. On the other hand, rumors that the iPhone 11 Pro Max would get Apple Pencil support turned out to be false—you still need to use your fingers to do everything. Winner: Galaxy Note 10+

For years, Samsung lorded its headphone jack over dongle-using iPhone users, but that advantage is no more. The Note 10+ has banished the headphone jack and, like the iPhone 11 Pro Max, it doesn’t even come with an adapter in the box. It does offer a pair of decent USB-C headphones.

There’s no visible speaker at the top of the Note 10+, but it does provide Dolby Atmos stereo sound by using the display as a sound driver. The iPhone 11 Pro Max also supports Dolby Atmos, but with a more conventional (and visible) speaker inside the notch. Additionally, you get spatial surround sound with the iPhone 11 Pro Max that mimics 360-degree sound. All in all, it’s very close, no matter how or what you’re listening to. Winner: Tie

Like the XS that came before it, the iPhone 11 Pro Max uses Face ID as its only biometric security feature. Samsung is sticking with the fingerprint sensor, though it’s been moved from the back of the device to the front, inside the display. While I had far fewer issues with it on the Note 10+ than I did with the Galaxy S10+, it’s still not ideal and pales in comparison to 3D facial recognition. Winner: iPhone 11 Pro Max

Each phone comes in a selection of four colors. The iPhone 11 Pro is available in Space Gray, Silver, Gold, and a new dark green called Midnight Green. The Note 10+ has Aura Black, Aura White, Aura Blue, and a new Aura Glow whose color changes based on how the light shines on it. We know you’ll probably put a case on whichever one you buy anyway (we’ve already picked some of the best Note 10/Note 10+ cases available), but we can’t stop looking at our Note 10+. Winner: Galaxy Note 10+

While both of these phones are very expensive, you can be assured that you’re getting the best of the best each platform has to offer. Based on the list here, the Note 10+ edges out the iPhone 11 Pro Max on the strength of its features (though I really miss the headphone jack), but it’s hard to argue with either choice. If someone handed me $1,100 and made me choose between them, I’d probably pick the iPhone 11 Pro Max on the strength of the camera. Without testing it yet, it’s hard to say for sure. But Apple’s track record gets the nod.