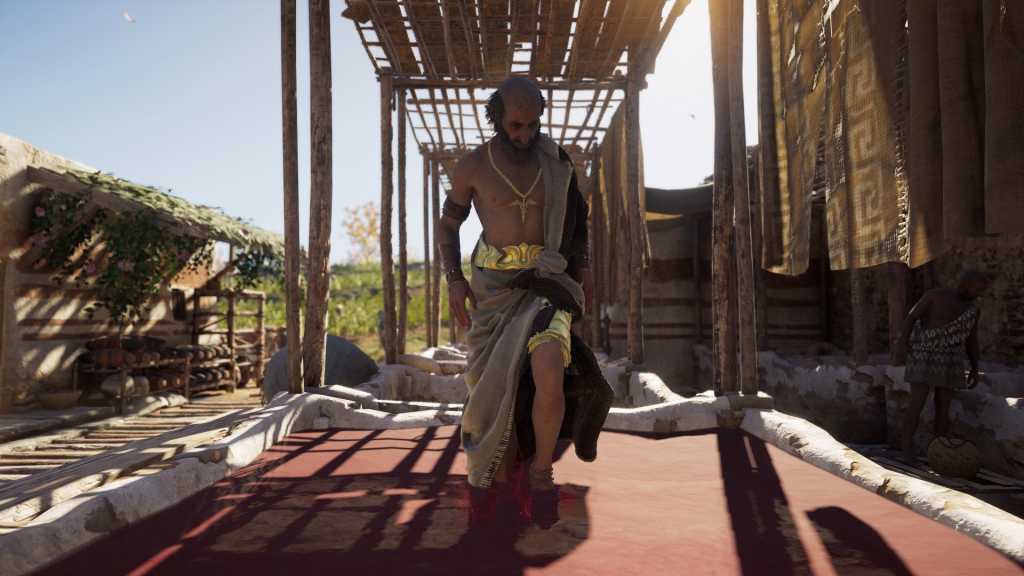 “My name is Herodotus, and I am a traveler from Halikarnassos.”

That’s underselling it a bit, I think. More than mere traveler, Herodotus is generally considered the first historian in the modern sense. And here he is standing on a remote beach, ready to regale me on the battles of Pylos and Sphakteria, key conflicts in the 30-year Peloponnesian War.

It’s an experience only Assassin’s Creed: Odyssey’s Discovery Tour can offer modern-day fans of history, and yet more proof how special this spin-off series can be—and how much more potential there is to explore.

All Greek to me

Discovery Tour debuted in early 2018 with Assassin’s Creed: Origins. After years of cramming historical tidbits into Assassin’s Creed submenus, Ubisoft (or at least someone at Ubisoft) apparently thought “Wait, this could be a whole experience in itself.” So they took their meticulously crafted facsimile of Ptolemaic Egypt, stripped out the enemies and other video game elements, and then filled it back up with history.

I loved it. As I wrote at the time:

“Assassin’s Creed: Origins was built by hundreds of people, spanning multiple continents. It took four years. The virtual world all those artists and programmers and sound designers and animators and so on created is inconceivably complicated, the type of world you only get with an enormous budget from a game expected to sell blockbuster numbers. No education-first game could accomplish what Origins accomplishes. Nobody could afford it, not even in the heyday of edutainment.

Piggybacking education on the back of a massive project like Origins though? This exhaustive recreation of Ptolemaic Egypt is going to exist regardless. That’s the genius of Discovery Tour. It’s one of the most ambitious educational games I’ve ever played, certainly the most expensive and polished, and it’s an afterthought.”

Then Ubisoft released Assassin’s Creed: Odyssey, somehow an even larger and more detailed recreation of Ancient Greece than Origins’s Egypt. I hoped another Discovery Tour would follow and now, nearly a year later, it’s finally arrived.

And it arrives with significant upgrades over the original—presumably the type that happen when someone goes “See, it sold well!” At least, I hope that’s the case.

Anyway, Odyssey’s Discovery Tour brings back voice actors from Odyssey proper to act as pseudo-tour guides. I say “pseudo” because they don’t actually walk in front of you and gesture to points of interest. Nothing so complex or dynamic. They do introduce each tour though, with Herodotus generally the purveyor of myths and legendary battles, Pericles your guide to Greece’s great cities, and so forth.

Once you’ve finished your self-guided tour, they then show back up to quiz you on what you learned. These are simple, three-question affairs and there’s no penalty for failure. The contrary, actually. Choosing a wrong answer prompts your guide to explain the concept in question, i.e. “No, Icarus was well-known for flying too close to the sun, not for slaying the Minotaur.” It’s sometimes more interesting to fail.

Having the quizzes come from established Assassin’s Creed characters also prevents it from feeling too dry, and I’d love to see this concept expanded on in the next Discovery Tour—whenever that might be. Let the characters drive the storytelling. Stop handing off the tours to a professorial voice over and instead let Herodotus wax on about the Peloponnesian War in character, maybe even add his own thoughts to the mix. Sure, you want it to be educational, but that doesn’t mean it can’t have a little more spark.

Tours are only the start of Discovery Tour this time though. The second improvement? Tiered points of interest.

The most involved, the aforementioned tours, function much the same as last time. Each revolves around a theme, say Winemaking. A golden line leads you from station to station, focusing on a nearby object or location and offering fully-voiced background information. Here, a tub for mashing grapes. There, an amphora. The narrations seem a bit more detailed than the ones in Origins, but the concept is similar.

When the narration’s finished, provided you want to learn more, you can call up additional non-voiced info at the press of a button—maybe an explanation of Greek army composition or the backstory for a Spartan general named in the voice over. And that info is accompanied by a reference image as well, like a shot of the modern-day Parthenon ruins, a relevant marble bust, or ancient coinage.

Origins was somewhat limited though in that everything had to fit one of the 75 themed tours. Odyssey scales back the number of tours to 30, but compensates by adding hundreds of “Discovery Points.” As you wander the world you’ll spot purple beacons which, when activated, essentially act as standalone tour markers—or like historical plaques in the real-world. There’s no voice over, but some of the most interesting information in Odyssey is hidden in these one-off points, details on Minos’s “Kretan Holes,” Greek siege instruments, the Acropolis’s olive tree, and so forth.

And maybe a quarter of the Discovery Points are outlined in blue, which indicates they’re not about history but rather the creation of Odyssey itself. These are fascinating, especially in the context of Odyssey’s magical-realist tone. [Minor Odyssey spoilers] For instance, I didn’t realize Medusa was housed on Lesbos because in real life there’s a massive petrified forest—and thus a tie-in to Medusa’s famed stone gaze.

Then below Tours and Discovery Points there’s a third layer of information, the “Historic Locations” that were already included in Odyssey proper. These, denoted on the map with an eye and triggered when you get close, offer one-paragraph blurbs about notable landmarks like the Thasos Theater and King Minos’s palace.

Taken together, there’s a much greater density of information in Odyssey’s Discovery Tour. A few of the smaller islands are notably barren, but around the major population centers it feels like you could wander in any direction and learn something. The compulsion to simply hop from tour to tour is less strong this time than it was in Origins.

And there are other miscellaneous upgrades as well. It’s worth noting for instance that the photographs of real-world artifacts are not censored in Odyssey as they were in Origins. I haven’t been able to tell whether the in-game statues have been clothed or covered up, but at least part of the experience has escaped the clumsy retouching that was (rightly) derided with the original Discovery Tour. If you want to see pottery inscribed with clumsy Greek genitalia, you can.

There’s also a neat, completely superfluous feature that allows your player-character to take the place of the generic townspeople as they go about their daily lives. If you see a white circle on the ground, you can nudge your avatar into it and they’ll start in on a relevant task—mashing grapes, harvesting wheat, admiring fish, cheering, and so on. It’s a fun feature for Photo Mode, where you can make Pythagoras (or the other 40-odd characters you can inhabit) undertake all sorts of tasks he’d no doubt find unseemly.

But it’s also neat to see some of the strings behind-the-scenes of this vast and complicated world Ubisoft’s built. If you’ve ever wondered how these worlds feel so lively, here’s one small piece of it.

I suspect you know whether Discovery Tour is something you’re interested in or not. Do you want to learn about Ancient Greece in a moderately interactive fashion? Good news, this is practically your only option.

If you don’t, that’s fine too. It’s free to all Odyssey owners (or $20 standalone) but there’s no mandate you experience the game this way. I’m nonetheless grateful to everyone who keeps buying Assassin’s Creed because it’s undoubtedly funding what’s quickly become one of my favorite parts of the series. As a kid I would’ve killed for the opportunity to learn about Greece in this fashion, to place Marathon and Thermopylae in the context of the surrounding landscape, to visit a scale model of the Acropolis in its full glory instead of relying on grainy black-and-white sketches in textbooks, to delve into Crete’s ruins.

Odyssey’s Discovery Tour upgrades make the experience richer and more engaging than it was in Origins, and I can only hope that trend continues.