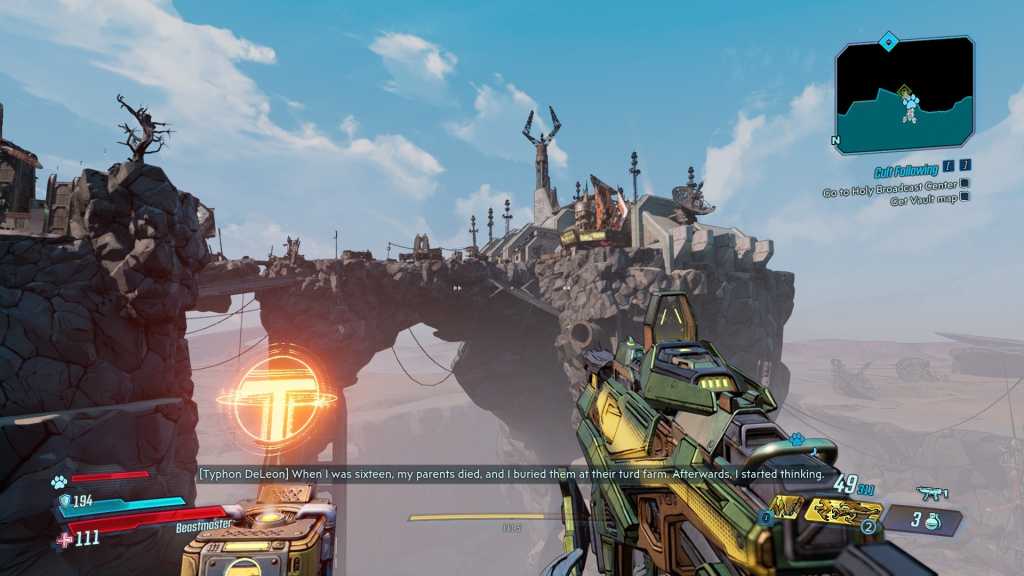 Borderlands 3 is exactly what it purports to be, which is “More Borderlands.” Should that annoy me? Or anyone? Probably not. There’s something to be said for giving the fans what they want, and hey, when I was in high school I was very into Tom Petty and very excited when he played “Free Falling” at the concert I attended even though there was no way in hell he’d skip it.

Point being I get it. You make a game called Borderlands 3, and it’s going to be Borderlands. Shut up and play the hits.

And Borderlands 3 embodies this risk aversion. Seven years has passed since Borderlands 2, but you wouldn’t know it playing the sequel.

Note that this isn’t a review per se, as I’ve only put six or seven hours into Borderlands 3 so far. The usual disclaimers: I could completely change my mind by the end, et cetera.

I don’t think I will though, as Borderlands 3 is precisely what I expected, nothing more and nothing less—but mostly nothing more. It’s a loot-driven shooter with a lot of green boxes to open, guns to acquire, and really bad jokes. Just the worst Wednesday Night Open Mic Stand-Up caliber jokes. Or one of those Reddit threads where you realize people are just regurgitating the funniest replies from the last time a topic hit the front page.

Still, for a certain type of person I expect that verdict will be cause for celebration. Borderlands definitely has its adherents. Hell, I used to be one. I played the original Borderlands through multiple times with multiple friends, and mostly enjoyed Borderlands 2 as well.

Progress is funny, though. It’s immeasurable and insignificant on a day-to-day basis. Then suddenly seven years passes and you’re like “Hot damn, Borderlands sure does have creaky knees.”

Case in point, I remember Borderlands feeling vast and sprawling back when open-world games were in their infancy. You could go anywhere! Shoot anything! What a novelty, at a time when shooters were still mostly linear affairs that moved from points A to B.

In 2019, not so much. Borderlands 3 is, to its credit, very large. It spans multiple planets, and multiple zones per planet. It’s hard for me to get a sense of how many hours are ahead of me, but I think it’s A Lot.

“Multiple Zones Per Planet” is exactly the issue though. The average Borderlands 3 map is bigger than any in Borderlands 2 I think, but the world is still carved up into small chunks. It feels clumsy, even if (as I suspect) the maps here aren’t any smaller than those in Destiny 2. There’s just a weird artificiality to walking up to a big ol’ gate, pressing a button, and then “traveling” to the next cordoned-off zone.

This feeling isn’t helped by numerous strange design choices. Your map rotates, for instance—not just the minimap but the world map. Thus every time you open the menu you get a different view, which makes it way harder to orient than it should be. (Even weirder: You can disable rotation for the minimap but not, to my knowledge, on the main map.)

The map also displays objective markers for only a single quest at a time. This is absolutely the most frustrating and archaic limitation in Borderlands 3. Say you have five or six active quests, there’s no good way to see what zone each one is in, nor to tell where they are in relation to one another. You have to check each manually and remember where they were. I’ve literally walked past the location for one mission on the way to another and not realized it, even though it would’ve been way more convenient to knock them out in succession.

You can’t fast travel while in a car, for reasons unknown. It’s never explained either. You’ll just inevitably try to fast travel from inside a car at some point, it won’t work, and then you’ll get out of the car and find it’s possible.

And a decade of loot-driven interface refinements haven’t touched Borderlands 3. Looking through your inventory is a pain. Comparing one item to another is a pain. Figuring out whether one weapon does more damage-per-second than another is a pain. There’s theoretically an objective “Gear Score” attached to guns, but in reality those numbers are pretty much useless for comparison. Here, I suspect Borderlands is simply a victim of its own success, with the number of variables attached to each weapon making raw one-to-one comparisons almost impossible—but it still means I spend an inordinate amount of time doing math problems in my head to try and figure out which gun to use.

I’m also trying to avoid talking about bugs because, well, that part won’t stay relevant long. There are so damn many though, especially on mouse-and-keyboard. Tutorials break constantly, and I’ve had to forcibly disable some to progress. One kept telling me to spawn in a vehicle, but wouldn’t let me. Another told me to hit “R” to see the orbital map view, while the map itself said “X.” Neither actually worked until I skipped past that tutorial prompt as well. (It’s X.)

But I don’t want to get sucked down this hole because a lot of my issues with Borderlands 3 aren’t bug-related. They’re more fundamental than that. The shooting, for instance, just doesn’t feel very impactful. Granted I’m still in the early hours and using pretty crappy gear, and it does feel marginally better than Borderlands 2. Enemies at least react when you shoot them, with Skaggs falling on their faces or bandits being blasted into the air by your shotgun. Still, for a game that mostly relies on the strength of its shooting, the shooting’s not all that snappy.

The shooting is carrying me through though. It has to, because it’s definitely not the writing. The terminally online tone had already started to grate on me in Borderlands 2 but Borderlands 3 is even weirder because it’s all over the damn place. One second it’s bad reference humor, the next it’s multiple audio logs about a…turd farm? That’s the joke. A guy’s family owned a turd farm. Actually there are a lot in that vein, as another character threatened to “Poop in my head.” There’s a gun named “Buttplug” and an enemy named “Buttmunch” and it goes on and on and on.

It’s not offensive or even offensively bad. It’s just sort-of there, mindless chatter that I find it hard to pay attention to when literally anything else is happening. The villains and their faux-influencer speeches are just as tedious, with none of the charisma or menace of Handsome Jack. There’s a “VR” mission that sounds like it’ll be a cool Psychonauts-style jaunt into someone’s head. Instead it’s just a repeat of a mission you already finished, but this time there’s a bluish “screen door” overlay.

The one highpoint so far is the character I’m playing as, The Beastmaster FL4K, who has some solid robot-misunderstands-aphorisms gags. Otherwise it’s been mostly exhausting.

Again, should “More Borderlands” annoy me? Probably not. It’s exactly what Gearbox promised.

It’s been a long time since Borderlands 2 though, and I guess I expected a more significant departure. Or hoped for one, at least. Tonally, the writing was always going to grate on me. I knew that from the first reveal. But I hoped the shooting would be tighter, that the maps would feel more inspired, that the villains and overarching story might hook me, that the loot would be more interesting. So far, it feels like replaying Borderlands 2 but with a less interesting villain—so then, like the Pre-Sequel. And especially after Tales from the Borderlands convinced me there were hidden depths to this universe, it’s disappointing to feel like none of that manifests here.

But we’ll see. I think I have probably 50-odd hours to play before we can put an official verdict on this one. Stay tuned.