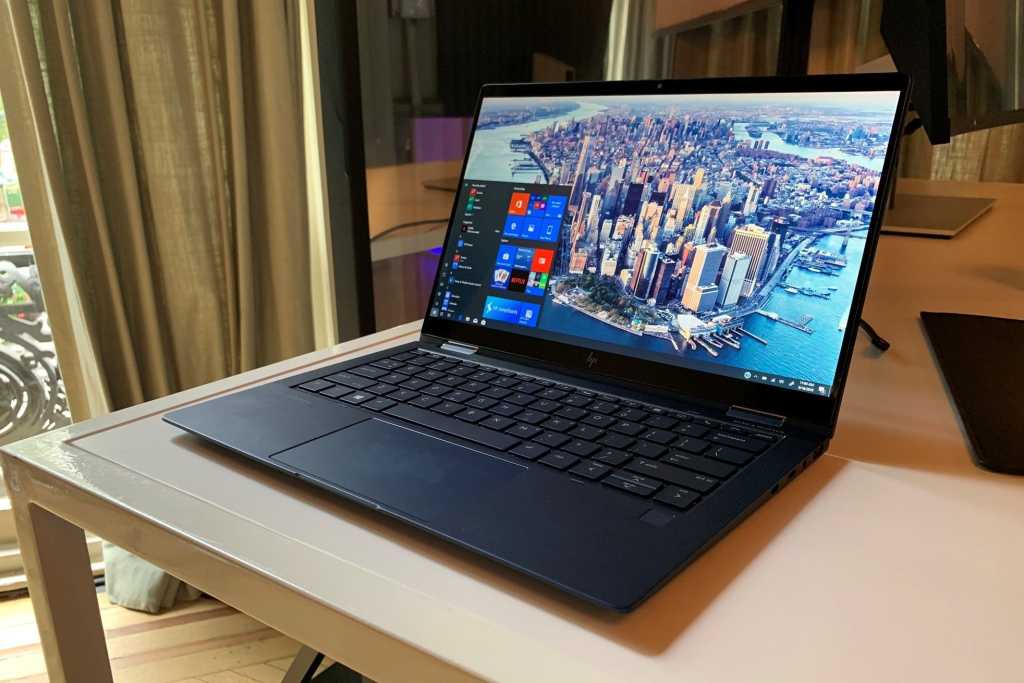 HP’s Elite Dragonfly is a 360-degree convertible laptop that manages the neat trick of fitting the most important enterprise features into a sliver of a package. And it’s got a cool name to boot.

Slated to land on October 25 with a starting price of $1,549, the Elite Dragonfly sports a chassis that’s just 0.6 inches thin. As we go through the features, you’ll see a generous array of choices in some areas, and in others, some necessary compromises due to the slender chassis. And if you like the sound of its 2.2-pound base weight or 24-hour battery life, just remember that only certain configurations will achieve those specs—we’ll explain more below.

Update: An earlier version of this story noted that memory for the Elite Dragonfly was restricted to 16GB. HP has since clarified that 8GB configurations will also be available.

The Elite Dragonfly has a spec list as long and shiny as its namesake. Let’s summarize the primary items before delving deeper into certain features:

The SSD storage options are a mix of SATA and PCIe SSDs ranging from 128GB to 2TB, some with Intel Optane Memory, one with FIPS encryption. The interface and capacity variations are too much to detail here, but suffice it to say you have plenty of choices.

For RAM, you can choose between 8GB or 16GB of dual-channel LPDDR3-2133 SDRAM. Granted, that is more than enough for most enterprise work, but note that it’s soldered to the motherboard, so no upgrading is possible.

The 13.3-inch display’s three panel options each have their own temptation. The standard Full HD (1920×1080) touchscreen is a 1-watt panel that treads lightly on battery life. The Sure View FHD can be toggled from a normal view to a secure one that thwarts sideways peekers. It also has a stunning 1,000-nit maximum brightness, but if you crank it up your battery will scream. Finally there’s a 4K option, which sounds insanely crisp and lovely, but it’s also a lot of pixels for such a small panel. You’ll need to scale up your icons or they’ll be microscopic, and of course, 4K displays use more battery life.

Speaking of the battery, the Elite Dragonfly offers two options. The standard 2-cell, 38Whr power pack offers a projected life of up to 16.5 hours, which is already great. There’s also a 4-cell, 56Whr Performance battery, and that’s the one projected to last up to a stunning 24 hours—provided your Elite Dragonfly has the standard FHD 1-watt panel. HP did not have estimated battery life stats for the other panel options, but it’s safe to assume they will not hit 24 hours. Note, too, that the Performance battery will increase the Elite Dragonfly’s total weight by about 0.3 pound.

As far as device interfaces go, the Elite Dragonfly offers two Thunderbolt 3 ports, perfect for connecting monitors as well as high-speed storage devices, along with a USB 3.1 Gen 1 Type-A port, a full HDMI port, and a combo 3.5-inch audio jack.

As with HP’s other recent Elitebooks, the Elite Dragonfly comes with Wi-Fi 6 support, just in time for the likely deluge of Wi-Fi 6 routers now that the latest Wi-Fi standard has finally been certified. There’s also optional gigabit LTE with 4×4 antennas, along with Bluetooth 4.2.

Besides its under-the-hood horsepower, the Elite Dragonfly arrives with a sleek CNC-machined magnesium shell designed to meet MIL-STD-810G standards.

It also features an oleophobic coating that’s designed to resist dirt and fingerprints—and indeed, the Elite Dragonfly that I checked out at HP’s launch event had barely any greasy fingerprints on it, even after it had been thoroughly handled by more than a dozen attendees.

The key caps on the Elite Dragonfly’s keyboard boast about 1.4mm of travel and the same quieter rubber-dome design found in HP’s 14-inch Elitebook 1040 G4 and x360 1040 G5 models. HP Noise Cancelling technology helps to cut down on ambient noise (including the sound of your typing) by up to 20 dB. I gave the keyboard a quick try and the keys indeed felt comfortable, although it was hard to tell how quiet they were in the noisy ballroom where the product unveiling took place.

The Elite Dragonfly’s 13-3-inch display comes with 4.75mm side bezels and a 10.25mm top bezel, giving it an 85.8-percent screen-to-body ratio that (again, according to HP) is tops for a 13-inch corporate convertible. Sitting in the top bezel is a Windows Hello-supporting hybrid IR/webcam with a physical privacy shutter.

Speaking of security, the Elite Dragonfly features a fingerprint reader that sits near the bottom right corner of the keyboard, while HP’s Sure Sense technology is designed to intelligently detect so-called “zero-hour” malware threats that have yet to be identified.

You also get such HP security features as Sure Click, which sandboxes webpages and read-only Office and PDF attachments; Sure Start, which helps the BIOS recover from attacks; and Sure Run, which is designed to prevent any tampering with your security settings. Remote IT management and maintenance via Intel’s vPro technology is an optional extra if you spring for a Dragonfly model with a Core i7-8665U processor.

Last but not least, the Elite Dragonfly will also be the first HP laptop to ship with the company’s new Workwell software, which reminds you to take breaks and recommends various physical activities at any interval you choose.