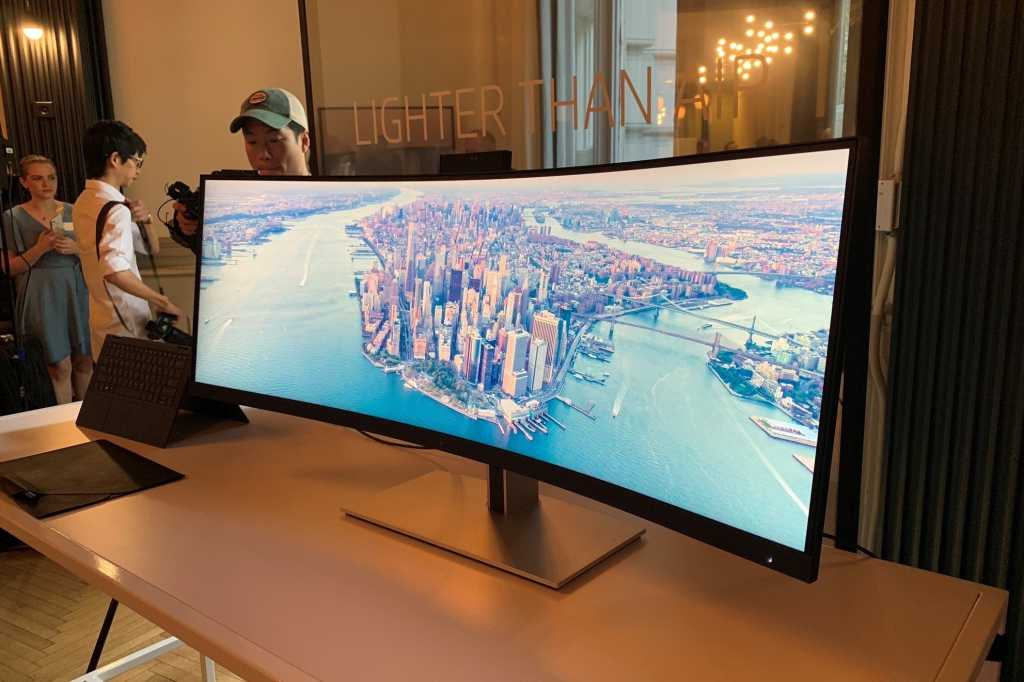 The 43.4-inch HP S430c Curved Ultrawide monitor puts dual-monitor setups to shame, and its ability to control two devices with a single mouse and keyboard will make you the envy of the office.

Priced at $999 and set to go on sale November 4, the HP S430c makes a big impression when you first lay your eyes on it—and indeed, unveiling a curved 4K monitor this big is one of the easiest ways to elicit gasps at a launch event.

Boasting an anti-glare, LED-backlit VA display with a maximum brightness of 350 nits and a rated 99% sRGB color accuracy, the 32:10 HP S430c does a nice job of displaying two desktops at once on a single PC, allowing your mouse to flow from one desktop to another without the cursor disappearing between monitors.

But the S430c’s coolest trick is its ability to control two PCs at once with a single keyboard and mouse, all without a KVM switch.

Windows, macOS, Linux, and Android devices are supported, as long as you can connect them to the monitor via one of its two USB-C ports. (Additional ports include DisplayPort 1.2 and HDMI 2.0, along with four USB 3.1 Gen 1 Type-A ports and an audio jack.)

Even better, HP’s DeviceBridge technology lets you copy and paste documents from one connected device to another, with the caveat that when it comes to Android, the S430c can only transfer files from Android devices, not to them.

You can also control how your device desktops are displayed using hotkeys on the display’s bottom bezel, meaning you can quickly switch between seeing two desktops at once or just one desktop stretched across the entire screen.

For now, however, the display is split 50-50 between devices—you can’t fine-tune how much of the display a given desktop can use. HP reps left open the possibility that such functionality could arrive later via a software update.

The display also features a pop-up, IR-enabled webcam that works for Windows Hello authentication. When you want some privacy, you can slide the camera back into the top bezel, effectively blocking its lenses.

Also announced by HP was the more conventional E344c, a 34-inch curved monitor with WQHD resolution, and a 21:9 aspect ratio.