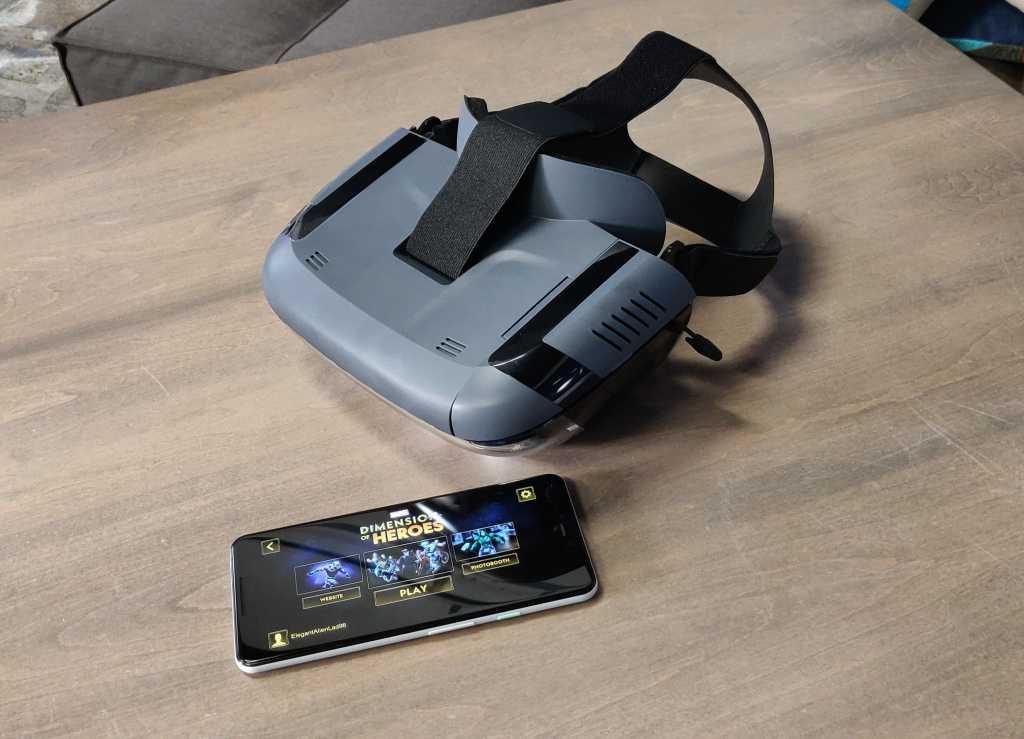 Lenovo’s new AR experience, Marvel Dimension of Heroes, checks all the right boxes: It’s fun, it runs well, and it stays true to its roots, with voice actors apparently lifted from the Avengers animated series. But though you can step into the shoes of six Marvel characters, the gameplay remains the same but for a few tweaks.

The Lenovo Mirage AR headset/controller combo is $250 on AmazonRemove non-product link, $50 more than the original platform, which powered Star Wars: Jedi Challenges. Instead of a single controller this time around, you get two, mimicking the hand-based gestures of a Doctor Strange, or the energy blasts of a Captain Marvel. Moreover, the system is backward-compatible with the Star Wars experience, so you’re getting two games for the price of one.

What’s in the box

Inside the tightly packed box is the Lenovo Mirage AR visor, two “universal controllers,” and a tracking beacon. You’ll need to supply your own smartphone, though both the Marvel app and the earlier Star Wars app are free.

Each “universal controller” fits around your hands, connected by an elastic strap, and wirelessly connects to your smartphone via Bluetooth. The controller is relatively complex: Not only can each individual position be tracked in space, but both have a pressable thumbstick, plus an additional two buttons that can be depressed or held as input for new gestures.

As before, the “visor” is a quasi-passive device. A pair of fisheye sensors on either side of the AR Mirage headset help track the individual controllers as well as the tracking beacon, a ping-pong-ball shaped device that needs to be placed or mounted close by the headset to fix its position in space. Three buttons mounted on the side supposedly launch the menu and can even begin video recording, but in my experience they rarely worked, due to an incompatibility mentioned below. (I was able to trigger the menu on one occasion, but that’s all. Ironically, that means that we can’t show what the gameplay actually looked like.)

The actual computing power is generated by a smartphone, which also serves as the AR display. Though there’s a range of listed devices that will work (from the iPhone 6 on up, through the Google Pixel and Samsung Galaxy S9, as well as the Moto Z, Huawei Mate 10, and others), you’ll basically just need a smartphone that has a 4.3-inch display or larger and a 2GHz quad-core chip (for Android), and has more than 2GB of memory. Essentially, you’re “watching” the Dimension of Heroes app, which governs the experience and requires about 1.8GB of space on your phone.

I was originally told that my Pixel 3XL was compatible with the Marvel experience, though Lenovo later backtracked on that. If you do not use an explicitly supported phone, you may encounter little glitches; for example, Lenovo told me that the video-recording button on the headset didn’t work because of my phone.

While the headset has an included battery, it’s not clear whether it’s there just to power the visor’s electronics, or keep your phone powered, too. My test phone still used up battery regardless.

If you’re familiar with the Lenovo AR hardware and just want to know how the app plays, use the table of contents to skip ahead.

Setup is simply a pain

Lenovo’s setup experience leaves something to be desired. Lenovo thoughtfully includes a number of little touches—AA batteries for the controllers and beacon, for example, as well as the proper cables—but critically forgets that users don’t know as much as it does. There’s literally no printed guidance to tell you that a) a smartphone is necessary, and b) how to attach it to the visor. (You should probably know this already, but still.) Lenovo’s setup documentation also basically fails to tell you that a good chunk of the setup will be handled by the app itself.

Even then, there are some odd touches: I’m fine that the visor requires charging before use, but the documentation notes that the LED will turn off either when the visor is fully charged, or when the power is off. That’s just silly.

You’ll need to install a pair of AA batteries in each controller, as well as the tracking beacon. (Battery life is 20 hours for the beacon, 8 hours per controller and just 5 hours for the headset, which includes a rechargeable 2200mAh battery.) As my colleagues Melissa Riofrio and Gordon Mah Ung discovered while trying the Jedi Challenges controller, you’ll need to set the tracking beacon’s color appropriately, via a switch underneath it. One setting is for two people playing simultaneously (with a separate AR setup), and one is for solo play.

Simply setting up the Mirage AR takes a lot of the fun out of the whole experience. Here’s what needs to happen, in a nutshell: You take your phone out of its case, slide out a tray within the visor, insert the phone, connect it to the visor via the appropriate USB cable, and put the visor on. Simple, right?

Not quite. Merely sliding out the tray to insert your phone took far longer than it should have; some sort of fabric loop would signal your eyes and fingers what to grasp. Even then, placing your phone inside the tray’s cradle means removing the case, aligning it correctly, then sliding metal tabs to secure it. Those metal tabs didn’t seem to want to loosen, so I abandoned my last-minute plan to change phones.

Android itself also gets in the way. I installed both Star Wars: Jedi Challenges and the Marvel app on my test Pixel 3 XL, inserted the phone, and then connected it to the visor’s micro-USB port using the included three-inch cable. At that point, Android popped up a message asking me if I wanted to automatically launch the Marvel app, or select between the two. The problem is that even if you haven’t inserted the phone tray at this point, the frame of the tray doesn’t allow you to physically select between the two apps—the tray itself blocks the point on the screen I needed to touch. In the end, I uninstalled the older Jedi app, so I could simply use the newer Marvel app in peace.

You’ll need to connect the two Universal Controllers via Bluetooth, and configure them by rotating them in a figure-8 pattern. This was, blissfully, easy enough. Finally, I had the Mirage AR set up and ready to use.

The game itself is pretty fun. Because it’s augmented reality, you’ll benefit from either a dark room, or at least a dark background. Unlike the Microsoft Hololens, whose holograms actually interact with the physical environment, the Mirage AR is essentially VR over a real-world backdrop. It largely cuts out the vertigo that can be associated with VR, which is a relief.

I used a Google Pixel 3XL as a test phone, with a 60Hz 2960×1440 display, powered by a Qualcomm Snapdragon 845. As instructed, I put the beacon about three feet in front of me. Though I moved around a bit, there’s probably enough room in an average bedroom to play, though the game requires you to turn and flail about.

Dimension of Heroes puts you in the shoes of six Marvel heroes: Captain America, Captain Marvel, Thor, Doctor Strange, Black Panther, and Star-Lord. In each, you’ll face off against different enemies, with different weapons and powers at your disposal. Each hero has three levels: two battles and a “boss battle” against a named Marvel character. The puppet master of it all, revealed immediately, is Dormammu, who is not here to bargain.

Each level begins with a bit of dialogue, with Doctor Strange serving as a sort of guide to the whole experience. Characters seem to be voiced, by and large, by the same actors that were in the Avengers cartoons.

Each controller serves as the character’s hand, with different characters holding different objects; Thor, for example, holds his hammer Mjoelnir with his (your) right hand, and uses his fist for the other. Captain America does the same, but with his shield.

What’s cool is that the mechanics shift with each character somewhat. Captain America can hide behind his shield, reflecting bullets and other attacks; he can also bash enemies with it, and fling it at distant enemies. When the shield is in flight, you’re vulnerable. At certain points, you’ll be able to “power up” and unleash special attacks, filling a gauge until you can unleash one of the two specials available. Special attacks are triggered by holding down or one both controller buttons, usually combined with a gesture.

Things can get fast and furious quickly, with enemies leaping in for close-quarters attacks, which can be parried, as well as projectile attacks from farther away. Certain attacks can be dodged by leaning in one direction, too. Five or six enemies can be on screen at once, with no noticeable slowdowns. There was an occasional hitch in the action, however, though that could have been due to my phone checking for email or some other background task.

I played for about 90 minutes at a time, with my guess at a complete game lasting about four to five hours. You have the option to play in story mode, or against waves of enemies. At the end of 90 minutes I had to take a break, to fight a wave of faint vertigo.

Lenovo’s platform generally recognized my swings and swipes without fail, even when I figured out that the best way to attack in close quarters was to flip my hand back and forth quickly, like I was dealing cards. Each level allows you to recalibrate the orientation of the controllers, which wasn’t especially important with heroes like Thor. With Captain America, though, where the angle of the shield is important for reflecting laser-based attacks, orienting it correctly is crucial, and the game became frustrating when it didn’t align correctly.

Unfortunately, you’ll have to be in love with the AR experience to really appreciate Marvel Dimension of Heroes. There’s no way around it: This is the same basic game, over and over, though with some tweaks, and at a pace that you find challenging but not overwhelming. For $250, you’re essentially receiving two experiences, one set in each of Disney’s key franchises. A quick check of the web, though, reveals that an Xbox One S with Minecraft is being sold for $220Remove non-product link at Walmart. In other words, other consoles provide you with better, cheaper gaming options—though none offer the AR experience Lenovo and Disney do.