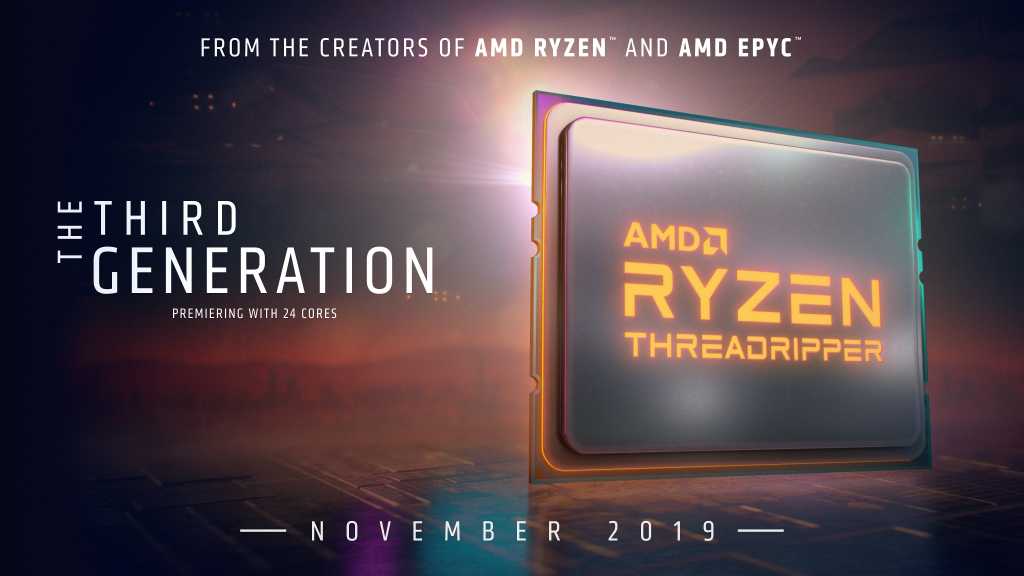 On Friday, AMD finally confirmed that its third-generation Threadripper chip will ship in November—but with 24 cores, not 32, as some had hoped. AMD also acknowledged that it’s having issues meeting demand for its 3rd-generation Ryzen chips, and has delayed the introduction of its 16-core Ryzen 9 3950X until November as well.

AMD issued a statement on Friday:

“We are focusing on meeting the strong demand for our 3rd generation AMD Ryzen processors in the market and now plan to launch both the AMD Ryzen 9 3950X and initial members of the 3rd Gen AMD Ryzen Threadripper processor family in volume this November,” the company said. “We are confident that when enthusiasts get their hands on the world’s first 16-core mainstream desktop processor and our next-generation of high-end desktop processors, the wait will be well worth it.”

Enthusiasts have wondered when AMD would begin shipping the next-generation Threadripper chip, whose launch in 2017 was met with acclaim, especially as the 1950X began stomping on other chips in multi-threaded applications such as image rendering. AMD’s second-generation Threadripper, the 2990WX, debuted in 2018—again to rave reviews.

But AMD has played it cagey since then, promising at Computex that a next-gen Threadripper wasn’t dead, and then promising that enthusiasts would hear more details of a next-gen Threadripper part before the year was out. Meanwhile, rival Intel launched the 18-core Core i9-7980X, which topped Threadripper by a couple of cores—though at a far higher price point. It also began promoting high-end chips like the Core i9-9900KS — not a direct competitor to Threadripper, but a high-end chip that couldn’t help but steal a little mindshare from AMD.

AMD didn’t say anything about what the new Threadripper would look like, but the enthusiast community thought it saw hints, including a 32-core chip that may be Threadripper, which popped up on the Geekbench review site in August. (It has since been removed.) It was identified as an “AuthenticAMD Family 23 Model 49 Stepping 0,” code-named Sharkstooth, a member of the AMD Ryzen family. The CPU northbridge is also identified as a Ryzen part. The chip itself was identified with a base clock of 2.2GHz, and a maximum frequency of 4.17GHz. A similar result was found recently, though it too has been removed.

The fine print in AMD’s launch picture may mean that expectations were way overblown—or that the Geekbench listing was falsified. In any event, AMD released the first image of its new third-generation Threadripper chip, which appears at the top of the story, and again, below. But only a 24-core chip is listed.

Meanwhile, AMD has had consistent issues shipping its high-end 3rd-gen Ryzen chips, pretty much since the company began shipping the highly-lauded Ryzen 9 3900X in July. While AMD shipped parts initially, we wondered a few weeks later if the Ryzen 9 3900X approached the status of a “paper launch”—major retailers were sold out, and 3rd-gen Ryzen parts began turning up on eBay. Today, inventory-tracking sites report that the 3900X was last in stock on August 15, and a check of Amazon and Newegg, among others, confirm that’s true. (A Ryzen 7 3800X is available at Newegg for $399.99, and Amazon even has the 3800X on sale for $389.49Remove non-product link at press time.) Meanwhile, eBay sales of the 3900X have continued to soar.

Given the disparity between the 3900X and 3800X, that may mean that AMD is having binning issues with its high-end chips, or that consumers are simply flocking to the very best AMD has to offer for a relatively inexpensive price—or both.  In any case, AMD has pledged to fix its issues.

AMD also had originally promised the 3950X would be delivered in September. AMD originally launched the 16-core chip at E3, promising that it would be priced at $749.  Now, consumers will have to wait a bit longer. AMD’s hoping that, in its words, “the wait will be well worth it”.