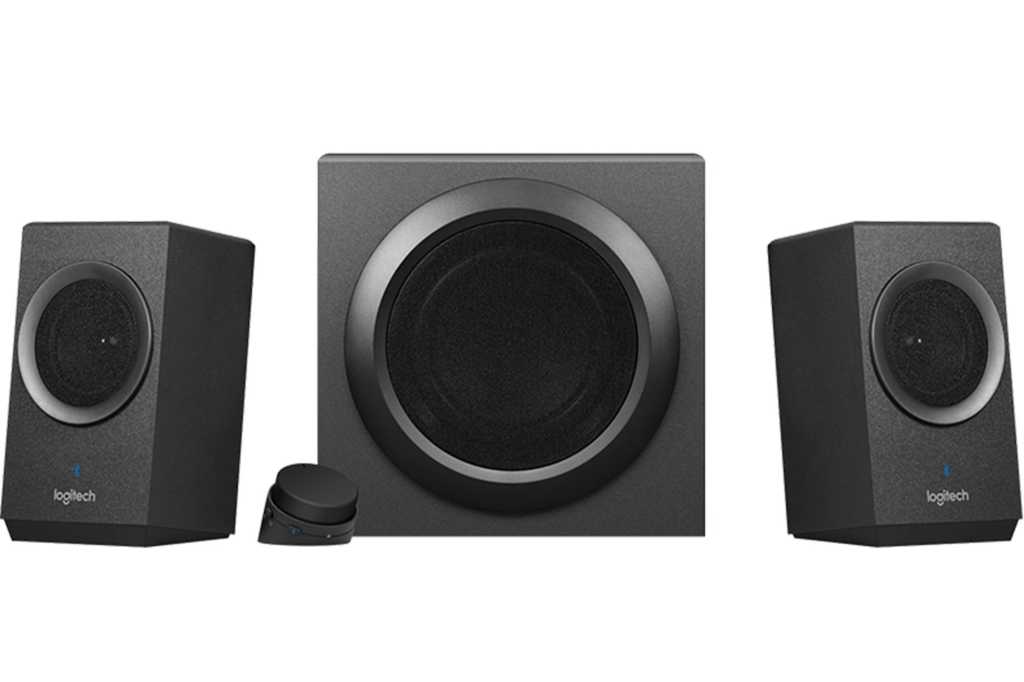 Image: Logitech
At a Glance

The Logitech Z337 offer great multi-connection convenience and delivers a nice bass boost to your audio, but overall sound quality is only average.

Logitech’s Z337 speaker system is a welcome sight for anyone who yearns for the flexibility to punch up audio from their PC and mobile device without having to constantly swap one out for the other. While it’s getting easier to find 2.1 speaker systems for under $100, you’ll still be hard-pressed to find one with Bluetooth, like the Z337. And as long as you prioritize that convenience over high-fidelity sound reproduction, you’ll probably find these speakers worth the wait.

This review is part of our ongoing roundup of the best budget computer speakers. Go there for information about competing models and how we tested them.

There’s nothing fancy about the Z337’s design. Both the satellites and the subwoofer are boxy and constructed of durable plastic with matte-black finish. There’s no ornamentation save for the Logitech logo on each of the satellites.

Each satellite measures 7.6 x 4.3 x 3.5 inches and weighs 1.4 pounds. The fabric-covered drivers are placed a little more than halfway from the bottom of the enclosure, which is angled slightly upward to direct sound toward the listener’s ears. Each satellite has its own output cable hardwired into its back.

The subwoofer is 9.1 x 9.1 in x 6.2 inches and weighs 5.25 pounds. Its fabric-covered driver takes up most of the front of its enclosure, and a small port is set in the left side. On the back of the subwoofer are a 3.5mm jack, the satellite inputs, an RCA input, and knob for controlling the bass output.

Rather than putting the controls on one of the satellites as many speaker systems do, Logitech has included a wired remote that’s attached to the back of the subwoofer. This control unit has a power switch, Bluetooth pairing button, and headphone jack all set around the base, while the top portion operates as a volume dial.

Setup instructions are printed on the inside flaps of the Z337’s box, but the process is pretty intuitive. Plug the satellites into the back of the subwoofer—the plugs and jacks are color-coded—and plug the subwoofer into an outlet. If your PC doesn’t have Bluetooth or you just don’t want to use it, you’ll need to plug one end of the supplied 3.5mm audio cable into your computer’s headphone jack and the other end into the 3.5mm input behind the subwoofer. Then just flip on the power switch.

While connecting the system takes mere minutes, setting it up for optimum sound takes a bit longer. All the cables are long enough to give you plenty of flexibility with positioning—it was easy to put the subwoofer under my desk. while leaving the satellites on top of it—but the typical desktop setup will also leave you plenty of slack to cinch up when you’re done. There’s also the matter of the wired remote, which adds an extra cable you’ll need to arrange around your keyboard and monitor.

Connecting your smartphone or other Bluetooth device is as easy as pressing the pairing button on the remote until it blinks alternately blue and white, then selecting the Z337 from among the desired devices. The system has a 15-meter line-of-sight range, but unfortunately it can be paired with only one device at a time.

The Z337 delivers 40W total power—8W per satellite, plus the 24W subwoofer—and is rated at 80W of peak power. That makes for decent sound output when you’re at your desk, and even when you’re away. The subwoofer delivers strong bottom end, and the bass control makes it easy to tailor it to whatever audio you’re listening to.

But while the Z337 delivers loud, bold sound, it’s not particularly nuanced. The bass and highs tend to stand out, with the mids getting lost in the mix. I was able to pull a little more detail from the sound using the iTunes equalizer, but you’re not going to get audiophile quality from a set of sub-$100 PC speakers, nor should you expect to.

Logitech hypes the Z337 as “bold sound with Bluetooth,” and on that score the speaker system delivers. They bring an ample boost to your audio whether you’re playing music, gaming, or watching video on any device within range. If you’re willing to sacrifice Bluetooth connectivity for better sound quality, though, we recommend checking out the comparably priced Sound BlasterX Kratos S3. Though it’s marketed to gamers, we found it delivers warm, detailed sound to any audio.