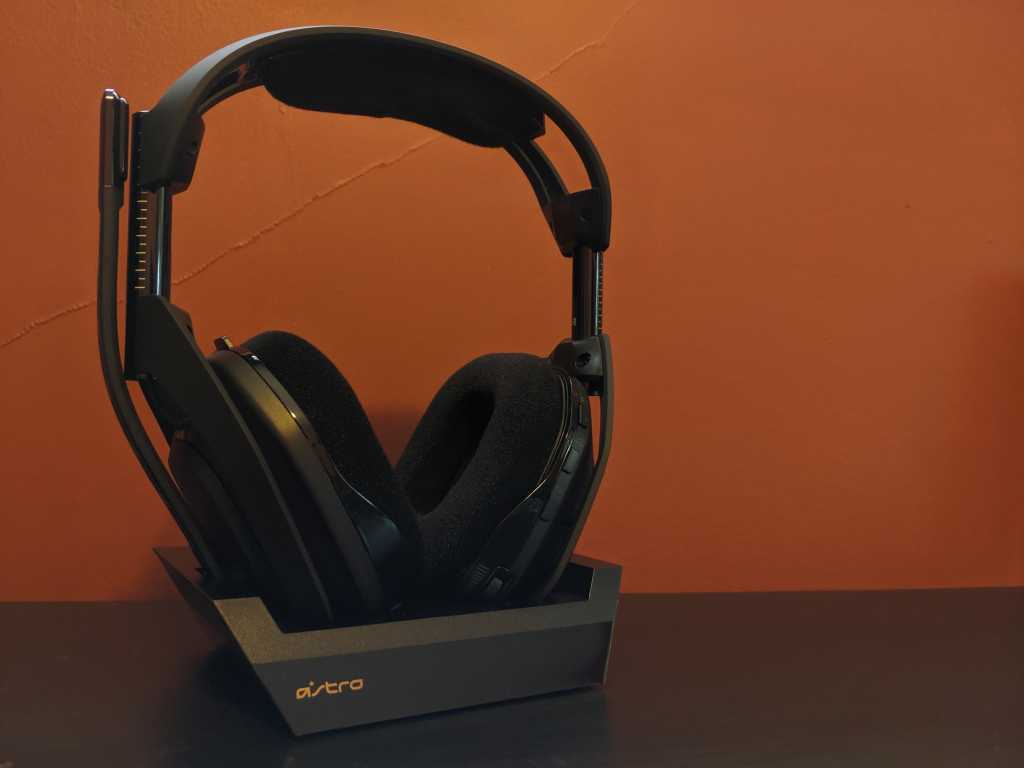 Expensive as ever, Astro’s redesigned A50 nevertheless makes a case for its sticker price with a sleeker charging cradle, a return to the more reliable 2.4GHz band, and a refined audio profile.

Last month we took a look at Astro’s A40 TR, the latest redesign of its venerable wired headset. And that can only mean one thing: A redesigned A50, hot on its heels. Astro’s flagship and its most expensive offering, the A50 was once probably the most capable wireless headset on the market.

Does that hold true in 2019, though? Can the A50 possibly justify its increasingly conspicuous $300 price point? As with the A40, Astro’s got an uphill battle—though I think the A50 comes a hell of a lot closer.

As I said when reviewing the A40, why not? The A50, like its wired sibling, is iconic. Astro’s rugged industrial aesthetic would seem dated if it debuted in 2019, but it didn’t. It’s a decade old, and it’s one of the few headset designs I’d say is instantly recognizable, especially given its widespread use in tournaments and by YouTube and Twitch personalities. Astro’s great at seeding its headsets.

So sure, I’d love to see Astro’s take on a sleeker headset, a la Logitech’s G533. But I can hardly blame them for sticking to the familiar when it’s built such cachet already. It’s a good design, equal parts comfortable and durable. Even with minimal tweaking, it still outdoes most of the competition in those respects.

Almost as good for half the price

And it’s worth noting that, however minimal they may seem, Astro has tweaked a few elements of the A50 headset. That’s more than I could say for the A40 TR.

First and foremost, the colors are more restrained this time. That’s somewhat meaningless, as Astro prides itself on providing options for personalization—even hinting that an A50 equivalent of its new A40 Astro.ID program isn’t out of the question. In a few years, we might all have technicolor A50s that match our innermost desires.

For launch though, Astro’s gone with…black-and-white (with a touch of gold). Boring? Safe? Maybe, but the last generation of A50s launched in blue-and-silver for the PlayStation 4 and PC, gray-and-green for the Xbox One. If you didn’t like it—and I didn’t—you were out of luck. Black is neutral. Black is inoffensive. And black is, for better or worse, more “premium” feeling than the toylike colorways of the last set. When you’re selling a $300 headset, that’s important.

Astro also redesigned the A50’s onboard controls slightly. The old A50 used a sliding switch to change among three EQ profiles. The new model replaces the slider with a button, which makes it somewhat difficult to remember which button toggles surround sound and which changes EQ.

You won’t need those buttons often though, and otherwise the A50’s controls remain best in class. The volume wheel is easy to find at the bottom-rear of the right earcup, and the facing edge’s Chat/Game channel mixer is still unmatched.

If you haven’t used an A50 before, it integrates two separate audio channels—one for game audio, the other ostensibly for chat programs, allowing you to adjust the prevalence and volume of each independently. On the wired A40, this is done by way of a massive dial on the standalone MixAmp module. With the Astro A50, you rock the side of the right earcup forward for more Game audio, back for more Chat. Audio cues let you know when you have a 50/50 mix, or when you’ve maxed out either channel.

There are other headsets out there that support two input channels, but most enable control with another wheel. In those cases I inevitably end up confused which wheel is for volume and which for chat-mix. Having two different mechanisms is a relief.

And last but definitely not least, Astro’s moved the A50 to the 2.4GHz wireless band. You won’t necessarily notice that change at home, but you’ll appreciate it. The old Astro A50 worked on the 5GHz band, which from the start had problems with signal range and penetration in my San Francisco apartment building. Interference has only gotten worse over the past few years as 5GHz proliferated. The change to the more reliable (and cleaner, at least around here) 2.4GHz band is a boon.

Enough about the headset, though. Most of Astro’s work went into redesigning the accessories, same as the A40 TR and its spruced up MixAmp.

The 2016 iteration of the Astro A50 introduced the charging stand, a new model for keeping a wireless headset topped up—and one I still haven’t seen copied. Keeping wireless peripherals charged is the main hassle preventing adoption, so Astro had a nifty idea: Remove the friction. Make it so the place you store the A50 is the same place you charge the A50. No need to remember to plug it in at night, no additional cables. Just set it in a custom cradle and power will flow.

It was impressive, but like any first-generation hardware there were some flaws. The old cradle was huge, with significant unused space. Despite that, it only liked to hold the Astro A50 when the headset was compressed to its smallest size, meaning larger heads needed to readjust the earcups for every usage.

The new cradle is smaller, tucked underneath the edges of the headset. It’s a much cleaner design, despite providing basically the same service.

The built-in display is more informative as well. The aforementioned change from an EQ slider to a button is mitigated somewhat by the fact that your chosen profile now displays on the charging stand as either 1, 2, or 3. (You’ll also hear an audio cue when switching among them.) Dolby and stereo modes are also displayed, the first with the standard Dolby surround logo, the latter with a star.

More importantly, it’s easier to get the Astro A50 into the damn charging dock—even when the headset is extended to its full size. No more awkward fumbling for contact. You drop the A50 into the stand, and nine times out of ten it lands securely and starts charging. The lone LED on the A50 turns yellow, and an eye-catching animation on the display acts as secondary confirmation if you need it.

That’s good because the Astro A50’s battery life isn’t very impressive by 2019 standards. Fifteen hours will get you through the day, but maybe not multiple days. I’m much better about charging the A50 though, thanks to the dock. In fact, aside from running it down on purpose once for testing, I’ve never seen it fall below the halfway point.

You can stretch that 15 hours pretty far thanks to the internal gyros. If the Astro A50 is stationary for 30 seconds—for example, if you lay it down on your desk—it automatically powers down to preserve the battery. That’s all well and good, but the real coup is that when you pick the A50 back up, it senses movement and powers back on before it’s even reached your ears. It’s a feature I expected everyone to copy, and yet to this day I’ve never seen another headset duplicate it.

These features, extraneous though they may be, are the reason you’d spend $300 on the A50s. Astro’s essentially made an argument for the A50’s price tag that doesn’t solely rest on the quality of the headset itself, which is smart.

That’s not to say the Astro A50 sounds bad. On the contrary, these retuned A50s sound better than ever. They’re warm and punchy, with a prominent mid-range that sounds great in both music and games. Like all Astro’s headsets, the high-end tends to recede a bit more than it should, with cymbals disappearing into the mix. Isolation could use improvement as well. There’s a set of wind chimes in a neighboring backyard that’s still really audible using the A50s, but I barely notice them when wearing other headsets. If you’re in a noisy environment, these won’t do.

But for the most part, the Astro A50s sound great. Not up to par with $300 audiophile headphones necessarily, but certainly competitive with the best wireless gaming headsets.

Problem is, most of Astro’s competition is in the $150 range these days. Thus Astro’s tactic of value-add features seems smart. It’s hard to justify a $300 headset when you can get the same fidelity from something like the Logitech G533 for half the cost. What you won’t get though? Astro’s charging dock, the internal gyros, chat-mix—and hey, one hell of a microphone while we’re at it. Those elements elevate the A50 above the competition in a way the audio alone could never accomplish.

Whether it’s enough to justify the price? I’m not sure. Astro’s made a compelling argument, and the A50’s still a favorite headset of mine. But it’s harder than ever to sell people on “Greatest” when you can get “Great” for half the price.

Then again, once you’ve used an Astro A50 for any significant amount of time it’s hard to go back to other wireless headsets. Whenever I do, I annoy myself when I forgot to charge a headset overnight, or lament the lack of chat-mix. So what are you really paying for with the Astro A50? Convenience, more than anything.