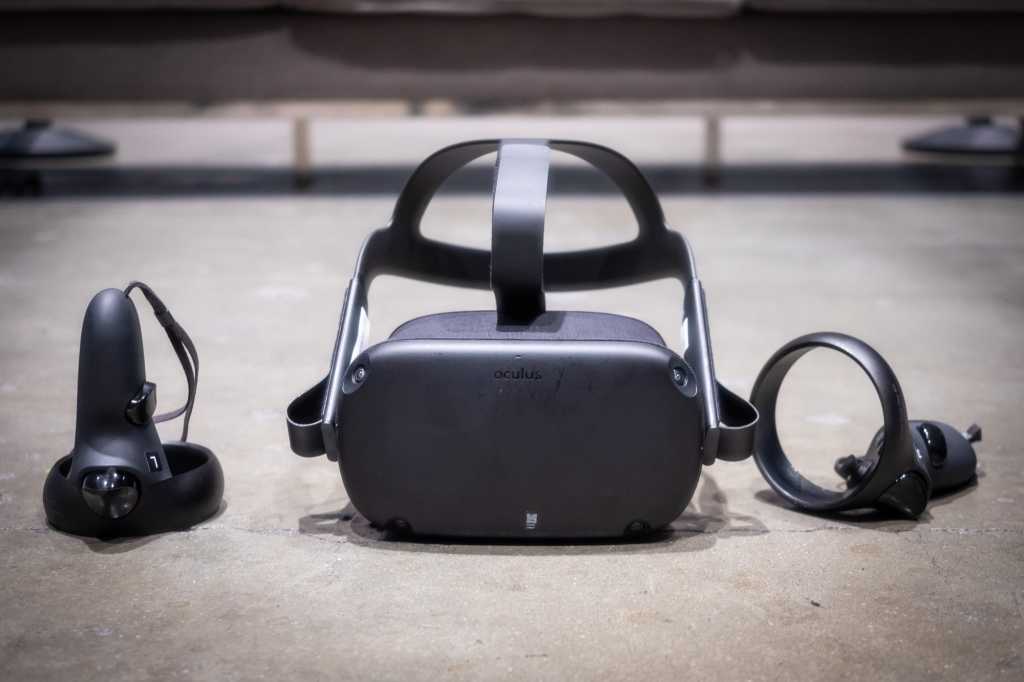 It’s been a big year for Oculus. Both its Quest and Rift S headsets released in April, effectively kicking off the second generation of consumer-grade virtual reality. The portable, wire-free Oculus Quest in particular felt revelatory, an almost desktop-caliber experience without the need for a desktop, playable at a moment’s notice. It’s arguably the biggest leap since Valve introduced position-tracked controllers and room-scale experiences with the HTC Vive.

A big year for Oculus means a challenging Oculus Connect 6 though. How do you fill an hour-long press conference with no promise of new hardware on the horizon?

Well, I guess you start by…teasing a tease of a tease of new hardware that will come in an unknown number of years. Exciting, right?

Anyway, Oculus announced “We are building AR glasses.” Then there was a spiffy video that showed some pretty standard augmented reality ideas, with a bit of tech jargon thrown in. No prototypes, no details. Just “Hey, we’re doing that too,” and a statement that they’re currently working on the “deep stack” right now.

And hey, listen: I think augmented reality has a lot of potential. Then again, I think Facebook might have a tough time selling people on glasses that intrude on their last remaining offline moments. Facebook, of all companies. Remember when people were punching Google Glass owners? Like that, times a thousand.

Of the two headsets released in April, Oculus Quest is clearly the future. I think we knew it when we reviewed both, and Oculus Link is making it official. The Rift S is still technically Oculus’s PC headset, but starting in November a new update will make it so connecting a USB-C cable from your Quest to your PC will allow you to run Rift titles on Quest.

Yes, Oculus Quest is effectively just a more portable Rift S now. There are differences in display type, and the Rift S has an additional tracking camera built into the chassis. But at the end of the day? There’s very little reason to buy a Rift S now. Quest will get you the best of both worlds, untethered VR for on-the-go play and tethered when you want to play something more intensive.

The second big feature update coming to Quest? Hand-tracking. No, not controller tracking—that already exists. This is more akin to Leap Motion. Using the Quest’s onboard cameras, you’ll be able to interact with virtual reality without the need for Oculus Touch controllers.

How well does it work? That, we don’t know yet. Oculus played a sizzle reel during the conference, and there’s apparently a demo here at Connect. Hopefully we’ll get the chance to test it out later and report back. Leap Motion was pretty clumsy the last time I used it, but that was more than a few years ago.

Look for the Quest to gain hand-tracking capabilities in early 2020.

Facebook’s talked a lot about social VR in years past, but hasn’t really made an impact yet. It’s been third-party developers who’ve cornered that space, ranging the gamut from polished experiences like Rec Room to bizarre ad-hoc forums like VR Chat.

Facebook Horizon is looking to change that though. It looks sort-of like Rec Room, giving users all sorts of random activities to do while hanging out—fly planes, paint, et cetera. I’m not convinced it will woo the same crowd that likes VR Chat, but Horizon at least looks more fleshed-out than Facebook’s last attempt, Spaces. It’s launching in closed beta in early 2020.

While we’re deprecating Rift S, might as well deprecate Oculus Go as well. Not officially, of course. But Go certainly feels dated now that Quest exists. Growing out of the old Gear VR, Go paved the way for mobile VR—but it has no hand-tracking, no position-tracking, no room-scale. None of what makes Quest special, really. It’s still half the price of the $400 Quest though.

But if you’re looking to upgrade, Oculus is at least making it a bit easier by allowing you to change your Go purchases to Quest versions for free—so long as you do so by the end of the year. Arguably that’s how it should’ve worked to begin with, but hey, different marketplaces and all that. Hopefully this is the last time we see this weird split.

If there’s any standout, it’s Respawn. A partnership announced way back in 2017, Respawn finally took to the stage at Oculus Connect 6 to unveil its big-budget VR title. It’s Medal of Honor: Above and Beyond. We actually had the chance to demo Above and Beyond last week, and you can find our more extensive thoughts here. It’s not the most ground-breaking VR title I’ve played, to say the least, but it’s certainly one of the biggest. That counts for something.

We saw plenty of other games as well. Oculus Quest looks like it will finish out its first year in style, with The Room VR and Pistol Whip top of my most-anticipated list. Popular Star Wars-themed Quest launch title Vader Immortal received a trailer for the promised Episode II as well—though if you own Quest, you might as well skip the trailer. It’s available now, so just go play it. Looks like you’ll be learning about the Dark Side of the Force some more.

As for the PC side? Medal of Honor is a ways off, coming sometime in 2020. Asgard’s Wrath is arriving on October 10 and Insomniac’s Stormland in November.

And that’s it. Not the most newsworthy Oculus Connect perhaps, but I’m excited to test out the hand-tracking at least—and there are plenty of great-looking games on the horizon. That’s really the key. Give me more reasons to play Quest, be it standalone or (now) attached to my PC. It’s a great piece of hardware.