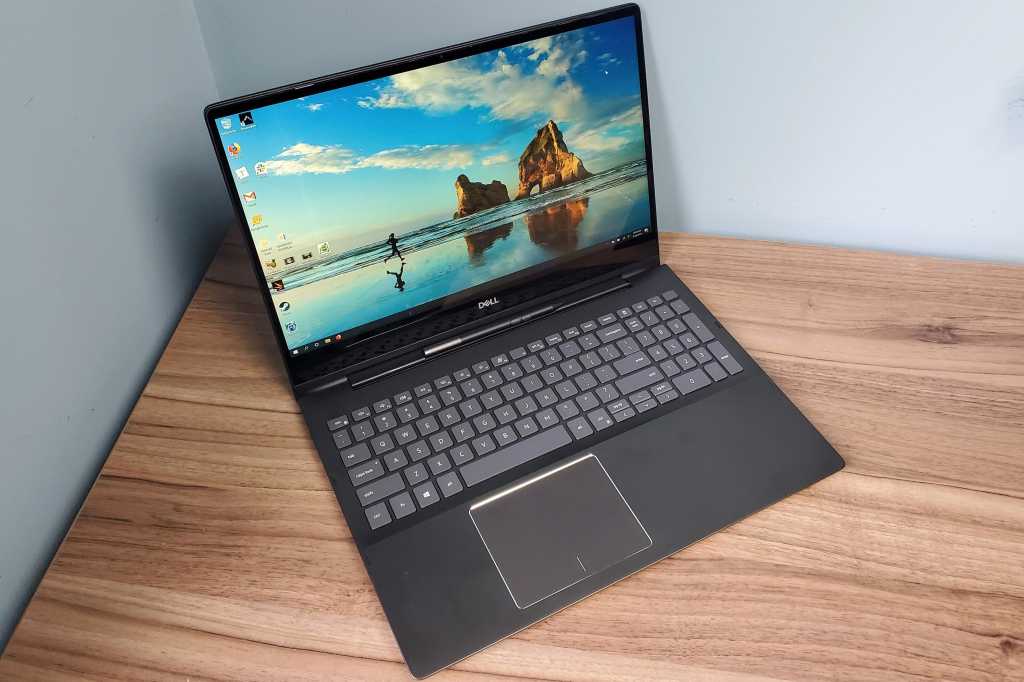 This hefty 2-in-1 has a gorgeous display and a clever stylus slot, but the 4K screen causes performance issues.

The Dell Inspiron 15 7000 Black Edition 2-in-1 is a laptop whose biggest selling point is at odds with a harsh reality.

The laptop’s most notable feature is a 15.6-inch 4K display with Dolby Vision HDR, giving it one of the crispest and most vibrant pictures you’ll find on a consumer-grade notebook today. But using this laptop at its full resolution comes with a trade-off: In certain applications, animations and scrolling become choppy as the system struggles to keep up with the demands of its 4K display. The result is a feeling of sluggishness that’s unbecoming for a laptop currently listing at $1,549.

The Dell Inspiron 15 7000 Black Edition 2-in-1 does have other virtues. The stylus groove built into its display hinge lets you carry around a full-sized active pen without any risk of losing it, the keyboard is exceptionally comfortable to type on, and the aluminum design is attractive. Still, those benefits can be harder to appreciate through an occasionally sluggish interface.

4K panel aside, the Dell Inspiron 15 7000 Black Edition is fairly well-equipped. It has an Intel Core i7-8565U processor, Nvidia MX250 graphics, 16GB of DDR4 RAM, and a 512GB Intel Optane H10 SSD, along with a fingerprint reader built into its power button. The 15.6-inch display also has a hinge that rotates 360 degrees, so you can fold the laptop around into tablet mode.

On the left side, Dell included an HDMI slot, a USB-C port, a MicroSD card slot, and a DC charging port. An additional USB-C port instead of proprietary charging would have been preferable, but you can charge through the USB-C port in a pinch if you supply your own charger.

On the right side, the laptop has a pair of USB-A 3.1 ports and a headphone/microphone combo jack. The top edge of the laptop’s display bezel houses a webcam. Dell says its four-lens elements is better than typical webcams at maintaining focus throughout the frame, but it’s still a grainy 720p camera in the end.

While Dell’s Inspiron line tends to be more utilitarian than stylish, the Inspiron 15 7000 Black Edition’s dark-gray aluminum chassis is an exception. The laptop also has impressively slim bezels, measuring roughly 0.25 inches on the sides and 0.37 inches on the top. Still, at 4.78 pounds, it’s one of the heaviest 15-inch laptops you’ll find in this price range, and the power brick adds almost another pound.

The display’s ups and downs

Let’s start with the good news: The Dell Inspiron 15 7000 Black Edition’s display looks gorgeous under the right conditions. Dim the lights and throw on an HDR video in Netflix or YouTube, and the picture might remind you of what you’d get on a high-end TV.

The right conditions, however, aren’t always so easy to come by. Dell advertises a maximum brightness of 300 nits, but we measured 263 nits in real-world testing, which is just average for a 15-inch laptop. (HP’s Spectre x360 15t touch, with a 4K AMOLED display, peaks at 485 nits.) The screen still looks great in normal lighting, especially with that crisp 4K panel, but the benefits of HDR are tougher to discern without more brightness. (Also worth noting: By default, the display will show HDR video only when the laptop is plugged in. You have to dig into Windows settings to enable HDR on battery power.)

The bigger issue is how the Dell Inspiron 15 7000 Black Edition performs at its native 4K resolution. Depending on the application, you may experience janky animations or choppy scrolling, even with the laptop plugged into outlet power and set to its “Best Performance” power setting. Here are some scenarios in which the laptop’s graphics stuttered:

In fairness, not every app behaves this way. Microsoft Edge and Word, for instance, both offered buttery-smooth scrolling, and both Edge and Chrome handled 4K 60-fps videos without issue. It’s unclear exactly who or what is to blame here, but I did test a second review unit and found the exact same issues. Having to use specific applications just to get smooth performance is a big trade-off to make on a $1,500 laptop.

The Dell Inspiron 15 7000 Black Edition’s graphics performance issues mar what is otherwise a decent laptop, with its keyboard being one of the biggest highlights. The keycaps have a soft, matte surface that feels downright luxurious compared to other laptops, and while they’re fairly quiet to type on, they strike down with a satisfying pop.

Dell also includes an active pen (its PN350M, to be exact), which is pressure-sensitive but only at 1,024 levels. (Some other laptop pens, including Microsoft’s Surface Pen, support four times as many pressure levels.) Dell even came up with a slick way to store it, carving out a magnetic groove in the display hinge that holds the pen firmly but keeps it easily accessible in tablet mode. When you fold the laptop closed, the pen is tucked away safe and sound for travel.

Compared to the laptop’s other input methods, the Inspiron 15 7000 Black Edition’s trackpad isn’t nearly as nice. The surface feels a bit sticky under your fingers, especially as you apply more pressure, and like most other Windows trackpads, the click mechanism gets stiffer as you move your finger toward the top edge. It does use Microsoft’s Precision Touchpad drivers, though, so it’s responsive and supports a wide range of multi-touch gestures, but Dell itself has offered much smoother trackpads than this (including the one on its new XPS 2-in-1).

While benchmarks don’t tell the whole story about a laptop’s performance, they do provide some hard data to back up what we’re seeing in actual use. With the Dell Inspiron 15 7000 Black Edition, for instance, we can see some evidence of how the 4K display creates performance compromises.

PCMark is one example, as Dell’s laptop is on the low end in this test of general productivity tasks. The HP Spectre x360 15t touch, which also has a 4K display, turned in similarly lackluster results, though the 13-inch version of Dell’s Black Edition Inspiron (without a 4K display) did poorly as well.

The Dell Inspiron 15 7000 Black Edition also struggled in our battery life test, which involves looping a video at about 250 nits’ brightness. That’s partly a consequence of the 4K display, but it also has to do with battery size, as the 4-cell, 68WHr battery in Dell’s laptop is on the small side for a 15-inch notebook.

Meanwhile, putting the laptop’s Intel Core i7-8565U to work yielded much stronger results. In Cinebench, which tests the CPU in short bursts, the Dell Inspiron 15 7000 Black Edition was near the top of the pack for both single- and multi-thread performance.

The Dell Inspiron 15 7000 Black Edition also trounced several other laptops with the same CPU and RAM while encoding a large video file using the free HandBrake utility. Dell makes a big deal of how the laptop uses “advanced algorithms and accelerometers” to ramp up power when the laptop is on a desk instead of a lap, and that clearly helped the Inspiron here. (Even the 13-inch version, which has less room inside for dissipating heat, distinguished itself from its algorithm-free counterparts.)

Due to its Nvidia MX250 graphics card, the Dell Inspiron 15 7000 Black Edition even outpaced several other laptops in its class in 3DMark, though HP’s Spectre x360 15t touch strangely came out on top despite using the last-generation version of Nvidia’s entry-level laptop GPU. Keep your gaming expectations in check, though: You won’t have any chance of playing games in 4K on this laptop, and with newer games, you’ll have to drop to 1080p or even 720p at low graphics settings to get a workable framerate. Besides, Dell’s 10th-generation Ice Lake CPUs are now delivering comparable graphics performance without the need for a dedicated GPU.

Should you buy the Dell Inspiron 15 7000 Black Edition?

Though it’s often discounted a bit off its list price, Dell Inspiron 15 7000 Black Edition remains a tough sell. It’s a sturdy machine with a great keyboard and a gorgeous display, but a laptop costing north of $1,500 shouldn’t be saddled with weak battery life, subpar trackpad, and everyday graphics issues with its 4K display. I can’t shake the feeling that a lower-resolution panel might have solved a lot of the Inspiron 15 7000 Black Edition’s problems, even if it weakened the laptop’s marketing pitch.