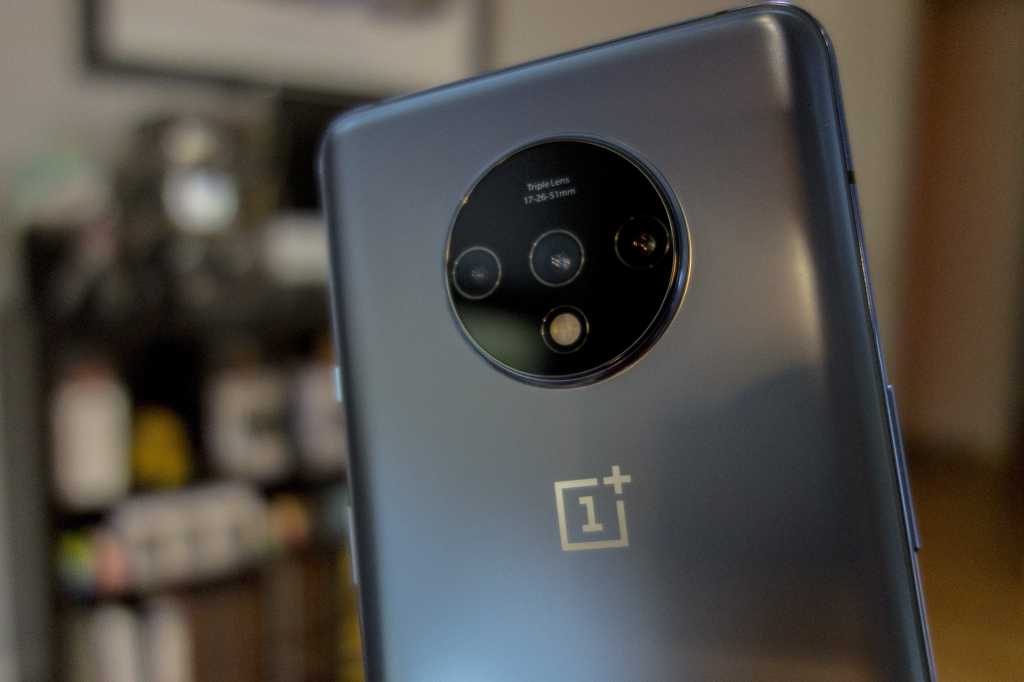 For years OnePlus has distinguished itself from the premium phone crop with unseen differences, offering the same high-end specs and design for much lower prices. That hasn’t changed with the OnePlus 7T. But this time around OnePlus wants everyone around you to know you’re not using a Galaxy, Pixel, or an iPhone.

That’s because OnePlus has gone circular. While square camera arrays are all the rage at the moment, with Apple and Google following Huawei’s Mate 20’s lead with an unapologetically prominent square camera on the back of their newest phones. But OnePlus is eschewing the square array with the 7T for a circular bump in the center of the back of the phone, a design element that could very become OnePlus’s trademark.

Of course, OnePlus isn’t the first or even the only smartphone right now that uses a circular camera array: the Moto G phones and Huawei Mate 30 instantly spring to mind. But with an impressive (if not predictable) combination of features and specs, and of course, a killer price tag, the OnePlus 7T will make a nice alternative for anyone who doesn’t want to spend hundreds more on a Galaxy or Pixel phone.

The specs we expect

While the OnePlus 7T is technically a refresh of the OnePlus 6T that arrived last year (since the OnePlus 7 wasn’t available in the U.S.), it’s very much cut from the same cloth as the OnePlus 7 Pro. While the front looks a lot like the 6T, with a teardrop notch and a flat design, the display is vastly improved.

But even though it’s not as big as the 6.67-inch 7 Pro, the OnePlus 7T’s 6.55-inch display has the same 90Hz refresh rate. That means scrolling and swiping is extremely fast. Couple that with a compact design, the fastest Android processor, and lots of RAM, OnePlus has once again built a phone with the best specs around:

What you’ll notice first about the OnePlus 7T—both on paper and in person—is the camera. Even before you take a single shot with it, its black circular countenance surrounded by a ring of color will stand out against the blue or silver body. No matter how you feel about Apple’s or Google’s giant square cameras, you’ll appreciate the OnePlus 7T’s array if for no there reason than it can rest on a table without wobbling.

More importantly, the OnePlus 7T has gained a third camera, giving it an extremely similar setup to the OnePlus 7 Pro. As we learned with that phone, hardware is only part of the story when it comes to smartphone photography, but based on a few early test shots, OnePlus is doing well to refine the system in the face of serious competition from the Note 10, iPhone 11, and upcoming Pixel 4, particularly when it comes to low-light shots, as you can see in the photo above.

Around the front, the OnePlus 7T has a lot of bezel around the screen compared to the 7 Pro, but it still very much feels like a 2019 phone. It has the same “teardrop” notch as the 6T, which helps reduct the top bezel, but OnePlus boasts that it’s “31.46 percent smaller.” You can definitely see the difference when the two phones are side by side, but in day-to-day use, you’re still going to notice that there’s a dip in the screen.

The 90Hz screen certainly does its part in helping OxygenOS feel snappy, but the Snapdragon 855+ processor along with the new Android 10-based build also do their part. In benchmarks, I was able to top 10,000 in PCMark’s Work 2.0 test, a relatively small leap over the Galaxy S10+’s 9,500, but an impressive milestone nonetheless.

Equally impressive is OnePlus’s speedy adoption of Android 10. While other phones have issued updates already, OnePlus can claim the distinction of being the first phone to ship with Android 10 on board, and the new gestures and animations make the whole system feel fresh.

Even dark mode gets a refresh here, with OnePlus embracing Android 10’s still-in-beta theming. You can tweak the accent, change the shape of the icons and quick settings buttons, or flip the tone from white to black, as well as apply a system-wide dark theme. The abundance of settings can get a little confusing, but it’s nice to see OnePlus embracing a deeper level of customization.

The OnePlus 7T might have a slightly smaller battery than the 7 Pro (3,800mAh vs 4,000mAh), but you won’t need to spend as much time charging it. While the OnePlus 7T still doesn’t have wireless charging, it does pack a new Warp Charge 30T charger that fills up the 7T 18 percent faster than the previous power adapter. OnePlus estimates that’s you’ll get from zero to 70 percent filled in a half-hour.

The price is right

Of course, the most important spec of all with OnePlus’s phones is the price, and the 7T doesn’t disappoint. Where the 7 Pro’s curved screen bumped the starting price to $699, the 7T is a much more palatable $599, with largely the same or better specs. That’s $100 less than the iPhone 11, $150 less than the Galaxy S10e, and $350 less than the Note 10, for those keeping score.

The OnePlus 7T will be available at oneplus.com and T-Mobile stores beginning Oct. 18.