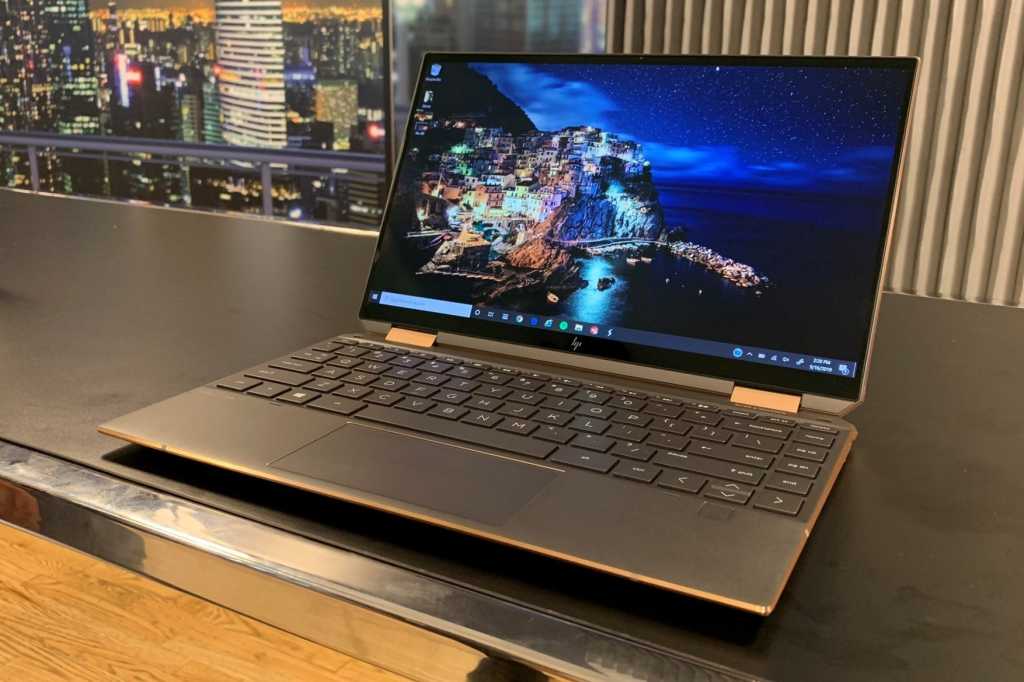 More of a refinement than last year’s full-on revamp, the latest HP Spectre x360 shaves off nearly an inch of depth, crams a tiny IR camera into its super-slim display bezel, and boasts crazy battery life. Oh, and Ice Lake! 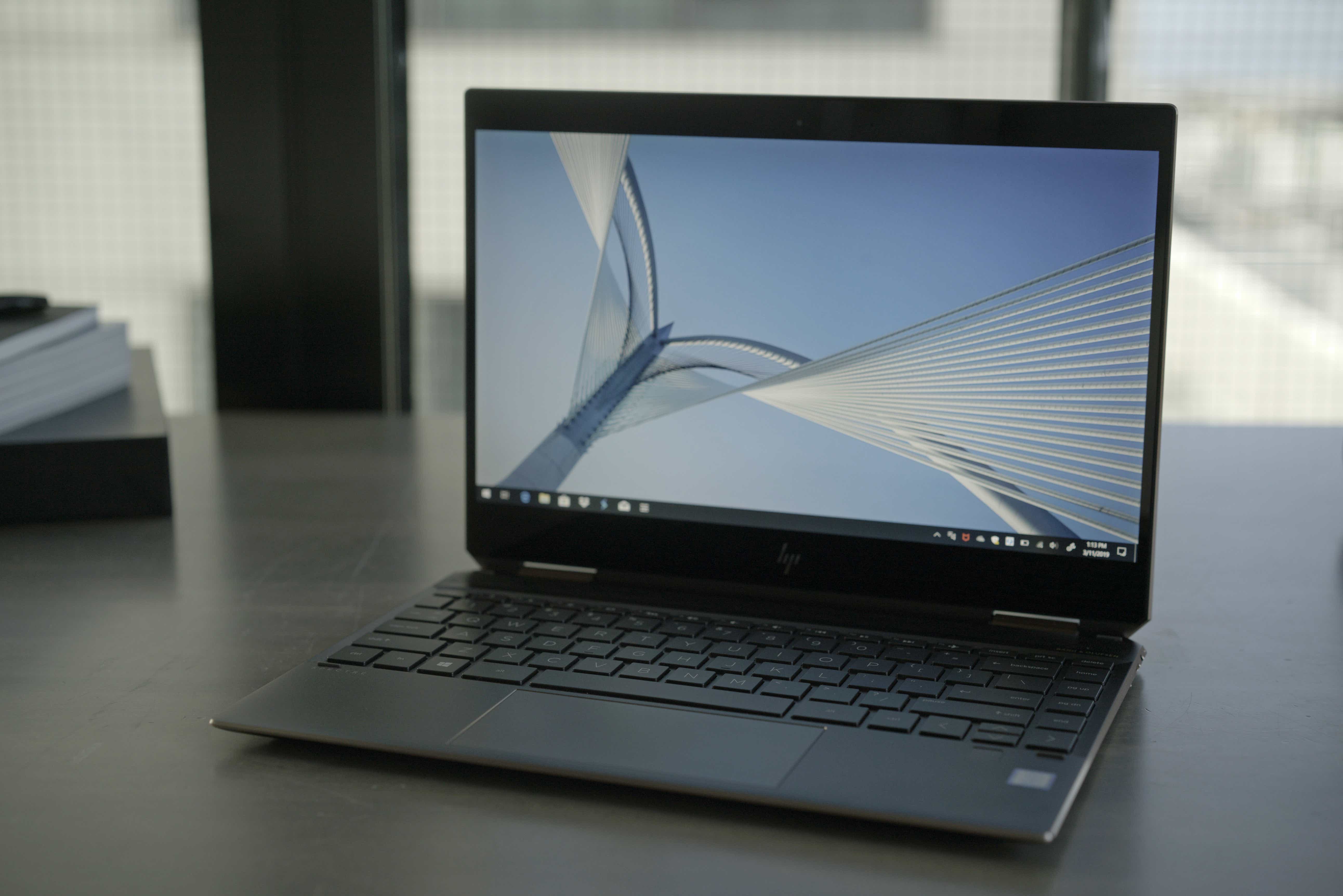 Set for release in October, the new HP Spectre x360 13 features the same classy gem-cut design as its predecessor, although a ruler will tell you that it’s nearly an inch (or 23mm, to be precise) less deep.

That’s a neat trick given what’s inside: Intel’s 10th-generation Ice Lake CPU, including your choice of either quad-core i5 ($1,100) and i7 ($1,300 and up) configurations, complete with Iris Plus integrated graphics on the Core i7 models. Sweetening the deal is up to 22 hours of battery life, depending on the panel you pick.

Note: The original version of this article included incorrect measurements in the Specifications section; those measurements have now been fixed. Our apologies for the error.

First and foremost, let’s talk Ice Lake. We have two quad-core choices here: the Core i5-1035G1 with Intel UHD G1 graphics, or the Core i7-1065G7 with souped-up Iris Plus graphics. In our general initial Ice Lake performance preview this summer, we found that 10th-gen Ice Lake CPUs cranked out impressive results when it comes to multi-core encryption and encoding tasks, while integrated Iris Plus graphics performance rivaled that of entry-level dedicated graphics cards such as the Nvidia GeForce MX150.

That said, Ice Lake’s performance improvements will be far less dramatic for single-core day-to-day activities like web browsing and Office, while the Core i5’s integrated Intel UHD G1 core is more on par with previous-gen Whisky Lake processors. We’ll be curious to see how the i7 and i5 Ice Lake chips perform in this latest HP Spectre x360 13.

So, how did HP manage to put a more demanding Ice Lake CPU into a smaller shell? First, let’s note that while the new HP Spectre x360 13 is indeed about an inch less deep than its predecessor, it’s also 2mm thicker, while at the same time 10 grams lighter.

In any case, HP says it’s boosted the laptop’s air outlet height from 2.5mm to 2.8mm while adding an inlet hole to the rear vent and upping the number of heat pipes from one to three. There are also more inlet holes under the keyboard, plus a bottom graphite sheet for added heat disbursement.

Next, let’s jump to the display—or rather, the ultra-slim top and bottom screen bezels, with the top bezel now 5.85mm (versus 17.35mm previously, or a 66.3-percent reduction), while the bottom bezel is just 11.09mm (compared to 25.82mm in the 2018 model), making for an overall 90 percent screen-to-body ratio. That looks good on paper, and in person, the nearly bezel-less screen looks even better.

To keep the HP Spectre x360’s web/IR cam in the tiny new top bezel, HP developed a 2.2mm IR webcam, which HP claims is the smallest in the world to support Windows Hello authentication. HP says their new IR camera has a smaller circumference than a grain of rice, and based on the plexiglass-encased sample I saw, that sounds about right.

As far as the actual display goes, you get the choice of three: a one-watt, 400-nit full-HD display, a 400-nit UHD AMOLED display, and (available in January 2020) a 1,000-nit FHD display with HP’s Sure View privacy toggle, which is designed to foil prying eyes by greatly reducing the screen’s viewing angles. For each display, you’ll also get the option of an anti-reflection and anti-smudge surface.

HP is promising up to 22 hours of battery life from the HP Spectre x360 13’s 60Wr battery, but that’s only with the 400-nit FHD 1-watt panel. If you opt for the 4K OLED or the 1,000-nit FHD with the Sure View toggle, you’ll have to temper your battery-life expectations accordingly. (HP didn’t give us battery estimates for the OLED or Sure View panels.)

Smaller though its footprint may be, the new HP Spectre x360 boasts essentially the same gem-cut design and machined CNC aluminum shell as its predecessor, and it also carries over some of our favorite design choices. For example, the power button still sits one of the rear angled corners, handy for protecting it from accidental pushes, while one of the two Thunderbolt 3 ports sits on the other angled corner.

Also returning is a side switch that electrically disables the IR webcam, while a new dedicated mic mute button on the keyboard will mute not only the HP Spectre x360’s built-in microphone, but also the mics on headsets or any other connected devices. An embedded LED indicator lets you know if the mic mute is activated.

Memory options will include 8GB or 16GB of DDR4 RAM, which should allow for plenty of multitasking headroom, while storage options range from a 256GB solid state drive to a roomy 1TB Intel SSD with 32GB of Optane memory.

On the networking front, the HP Spectre x360 will have Wi-Fi 6 and optional gigabit LTE, with 4×4 antennas allowing for simultaneous gigabit Wi-Fi and LTE streaming and downloads.

Overall, this latest version of the HP Spectre x360 13 looks even more promising than the last one, and I can’t wait to see how it performs with Ice Lake under the hood. We’re planning on putting it on our test bench around the time it goes on sale next month, so stay tuned.