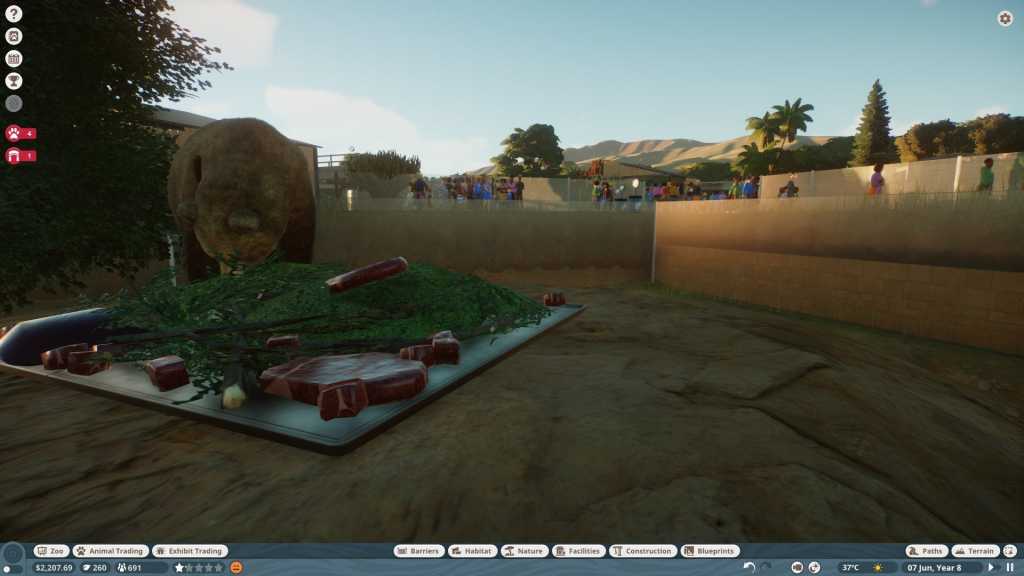 That last part’s a kick in the teeth. Here I am trying to run a respectable zoo. I’ve poured thousands of dollars into this money pit. I’ve scoured the globe for unique animals so the masses can mash their faces against the glass and yell “Do a trick!” blind to the minor miracle that is getting a grizzly bear to survive in 100-degree heat.

And then one of my keepers simply forgot to feed one of the Galapagos Giant Tortoises until it starved to death. Planet Zoo is one of the most frustrating betas I’ve ever played, and yet I’ve already poured entirely too many hours into it this week, and probably many more to come. I can’t stop playing, even when it’s half-busted.

We bought a zoo

The Planet Zoo beta is due to run through October 8, and is accessible to anyone who’s preordered the $55 Deluxe Edition. I never, ever recommend preordering games. Don’t do it! It’s silly! But if you’re wondering how you can get access, there it is.

It’s a fairly limited slice on paper. There’s one campaign mission and one sandbox map, the former in the “Temperate” biome and the latter in the “Savannah.” And the campaign mission you’ll likely blow through in half an hour or so. It’s the first mission of the game, and thus your goals are mostly tutorial fare like “Move the camera” and “Build a simple enclosure.”

This being a builder though, you can spend hours in the sandbox. Even with a limited subset of items and animals, there’s a lot to play with. And a lot that’s unexplained. And a lot that might be unexplained or might be a bug, because this is a beta and it’s hard to know the difference sometimes.

Here’s the thing: I didn’t kill Jose. Planet Zoo kept alerting me, “An animal is starving!” Then later, “An animal is near death!” I kept sending keepers to the Galapagos Tortoise pen, pointing them towards the food bowl, trying my damnedest. And you know what happened? Nothing. My keepers would walk in, see the empty bowl, and leave. To go where? I have no idea.

This is far from the only bug-slash-unexplained-mystery I’ve encountered. Franchise Mode relies on Frontier’s servers to work. There’s an Animal Marketplace that you purchase your exhibits from, and it’s all handled server-side. This being a beta, the servers have been an absolute nightmare. It takes forever for listings to show, and clicking on a listing takes even longer. Making a purchase is met with an “Unable to complete adoption” error more often than success.

Then there are the quality-of-life letdowns. It’s almost impossible to make a rectangular pen. The construction tools hate right-angles. Hate hate hate. I find myself missing Cities: Skylines’s contextual grids a lot.

And I miss click-and-drag construction as well. Running a long path or barrier in Planet Zoo means dragging the relevant length slider to its maximum, then marveling at how short that still seems compared to the overall map size, and then manually inputting every single segment and hoping the pieces connect up at the end.

These aren’t really “beta” issues. I mean, they are insofar as they can be tweaked before release. What I mean though is they’re not bugs. It’s intended behavior, even if it’s annoying. Some of it’s even carried over from Planet Coaster, which has had nearly three years of iterating.

Despite all my complaints though—and they’re myriad—I’m having a fantastic time.

Like Planet Coaster, this is less a management game and more a construction dream kit. I’m only now starting to wrap my head around some of the more complex possibilities, in part because the Planet Zoo beta throws you into the deep end. After the aforementioned tutorial level where you barely do anything worthwhile, you enter the sandbox and there’s…nothing. It’s a completely blank map, with no exhibits, no animals lying in wait, no obvious starting point.

Those early pens look ugly. I’ll probably scrap it all and start over soon. But it’s almost refreshing, having absolutely no guidance. I’ve learned quite a bit already, and it’s felt organic. My favorite part about Planet Coaster and now Planet Zoo by extension is that the construction tools are powerful enough that any idle “Can I do it?” thought is usually answered in the affirmative.

Thus I’ve only just constructed a hippopotamus pen that extends underneath a guest walkway, an eye-catching bit of architecture and a great view for my guests. I also sank my grizzly bear pen down into the ground, an idea I stole from the zoo I grew up with. I’m going to need more time with Planet Zoo’s terrain tools, but that enclosure came out pretty good for a first attempt as well.

There’s a lot of potential. Some of that potential is buried under beta woes for sure, and I’ve Alt-F4ed from irritation a few times now. That “Unable to adopt” message is particularly galling, as adding new exhibits grinds to a halt.

I inevitably find myself popping it back open after a few hours though, adding trees and otherwise trying to beautify my rudimentary habitats, trying to make my staff pathways more efficient, and so forth. The management side still seems pretty lightweight compared to other sims, but I don’t really mind. I just want to build a world-class zoo, and I’m having a great time in that regard.

With the full release only a month off, I hope Frontier has enough time to fix the more pressing issues. They’ve got their work cut out for them. But uh, who am I kidding? I’ll be there anyway, trying to make sure my warthogs don’t feel crowded and enlisting an army of caretakers to clean up grizzly bear poop.

They poop a lot, it turns out.