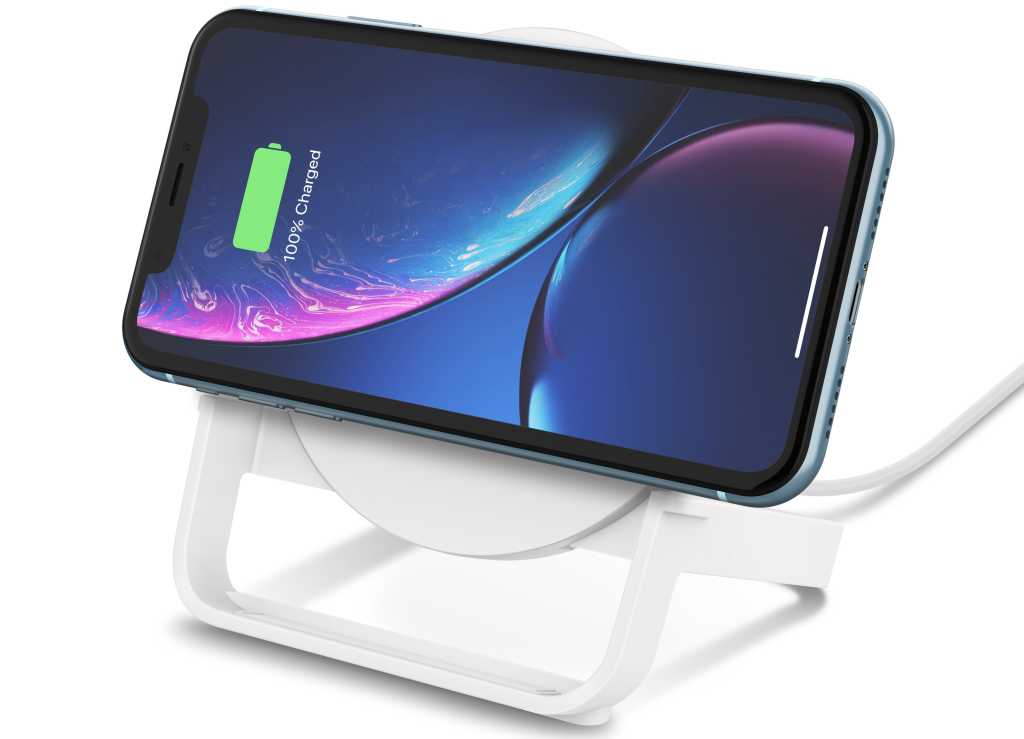 Belkin
At a Glance

The Boost Up Wireless Charging Stand won’t wow you with its average performance, but it does set itself apart with a unique and versatile design.

Wireless charging stands often have a pretty similar look: a main body that holds all the charging components, with a small ledge at the bottom on which your phone rests. But Belkin’s $50 Belkin Boost Up Charge Wireless Charging Stand 7.5W has a little different look.

Available in black or white, the circular body is held upright by a separate stand that can hold your phone in either portrait or landscape orientation.

Included in the box are a wall adapter, power cable, and the wireless charging stand itself. This particular Belkin stand is only sold on Apple’s website and in Apple stores, but it works with any Qi-compatible device, be it the Pixel 3, Samsung Galaxy, or the new iPhone 11 lineup.

Despite the “7.5W” in the product name, the wireless stand will charge at up to 10W on supported devices. I suspect that the only reason for the 7.5W in the name is because that’s how fast the iPhone lineup charges, and Apple is all about cohesive branding.

In testing the speed of Belkin’s wireless stand, I was a little disappointed. First I tested it with a Samsung Galaxy S9, as per our testing methodology, and the stand had an average charging time of 215 minutes, which puts it in the middle of the pack when compared to all wireless chargers I’ve tested. That’s not great, but it’s not horrible either.

To test it at iPhone charging, I used an iPhone XS Max and found that the Boost Up stand managed to charge the battery, on average, 35 percent over an hour. That would be equivalent to just under 42 percent on an iPhone XS. And, again, those numbers are in the middle of the pack.

What makes this particular stand so appealing to me is its design. Being able to place my phone in landscape mode across the stand’s arms and watch YouTube, or place a FaceTime call with the screen at a higher, more natural level, is a big selling point to me.