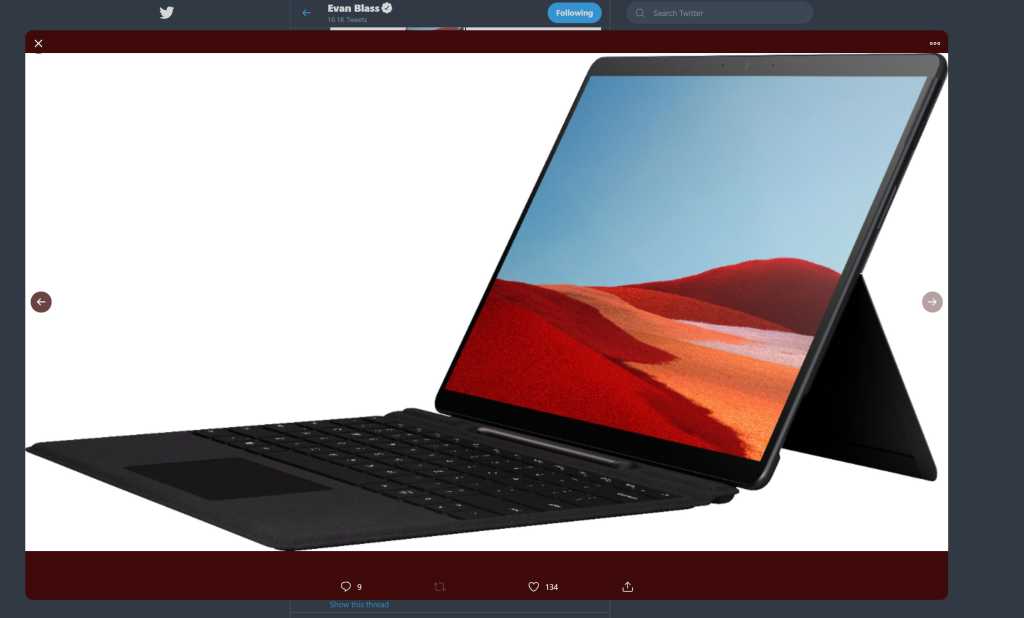 More details about Microsoft’s upcoming Surface announcements have leaked out, revealing images of what apparently are the Surface Pro 7, Surface Laptop 3, and an ARM-based Surface, with perhaps more to come.

Evan Blass, whose Twitter handle is @evleaks, published what appear to be marketing materials for the upcoming Surface devices, scheduled to be unveiled at a Microsoft event on Wednesday. The published photos generally line up with what was expected, including two different sizes of the Surface Laptop 3. A Microsoft representative did not immediately respond when asked for comment.

There could be a surprise, too: a dual-screen Surface, Blass tweeted. (Though I follow Blass on Twitter and can see the images he posted, his tweets are protected—meaning that they can’t be linked to directly.)

In short, the images Blass shows point to at least several products being revealed on Wednesday:

Assuming they’re real—and Blass has a good reputation in this regard—the images Blass posted clear up a couple of questions. For one, the Surface Pro 7 includes both a new USB-C port as well as a USB-A connection and a Surface Connector, supporting all three I/O technologies. (The Surface Laptop 3 may also include all three ports, but of the images Blass leaked, only the left side of the chassis isn’t shown—the side that typically houses the USB-A port. It does show the Surface Connector on the right-hand side.)

The Blass images also confirm a redesigned Surface (which Blass refers to as an ARM-powered Surface) and show the tablet with a pair of USB-C ports, unlike the traditional Surface Pro devices. Like the Surface Pro, it has a kickstand, along with the other Surface Pro 7 that Blass reveals. There’s what looks like a new, flattish stylus that fits inside a pen tray of sorts on the front of the device. The keyboard looks absolutely flat, possibly lacking the magnetic hinge that allows the Surface Pro 7’s Type Cover to be slightly inclined.

PCWorld has been told that the ARM-based tablet runs a modified Qualcomm Snapdragon 8cx, which has been rebranded. The tablet itself is being referred to as Surface Pro X, though that may in fact be a placeholder for a Surface Pro 7, or even a Surface Pro 7x. Exact branding was still being worked out late on Friday and into Monday, we’re told.

Blass didn’t reveal a Surface Book 3, probably giving credence to the rumor that it won’t appear.

Given that Blass seems to have unearthed a trove of marketing materials, it’s telling that the dual-screen device he apparently found evidence of doesn’t have any pictures associated with it. That could mean that Microsoft is keeping photos of it locked down tightly, or else just a prototype will be shown on stage. We’ll know more on Wednesday.