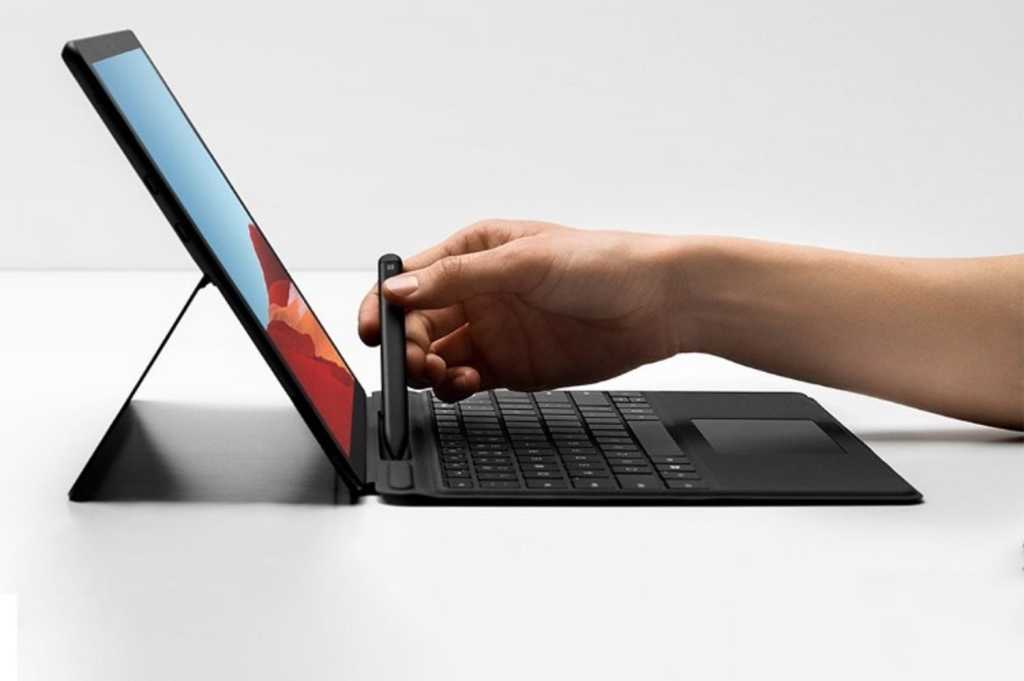 Microsoft’s Surface Pro X is setting a new bar for Microsoft’s most compact 2-in-1, rocking a designer SQ1 chip that just may help you forget the underwhelming ARM-based Surfaces of the past.

Those Surfaces of yore had ARM chips that could run only Windows RT, a cut-down version of the OS. But Qualcomm’s been busy working on ARM chips that can drive full PCs. In late 2018, Qualcomm showed its most powerful chip, the 8cx, running full-fat Windows 10 Pro. It’s likely that Microsoft’s SQ1 chip in the Surface Pro X is running a variant of the 8cx (Microsoft didn’t say). Benchmarks will tell all, of course, but it’s likely this will not be a repeat of past ARM disappointments.

Here’s what else we know about it.

We expect ultraportable devices to be hermetically sealed, but the Surface Pro X actually offers a removable hard drive. It also supports two external displays, and it will come with LTE connectivity (enabled via a wireless subscription, of course).

Nestled inside the detachable Surface Pro X Signature Keyboard you’ll find the new Surface Slim Pen. It is skinny—not necessarily something you’d want to write on for long—but it charges constantly in its dock, and its 4,096 levels of pressure should make it equally adept at drawing as well as writing.

About the SQ1 chip

Microsoft’s SQ1 chip is not just a Snapdragon 8cx clone. While Microsoft worked with Qualcomm to develop it, it adds some things the 8cx doesn’t have, including what Microsoft executive Panos Panay called an “integrated AI mobile accelerator” and a redesigned GPU.

Demoing the AI, all Panay showed was an ability to adjust your webcam view so you’d look at the viewer instead of upward toward the camera. That’s a neat trick, but we assume there’s a lot more to it.

More important to most PC users is power efficiency. “With SQ1 we pushed the boundary of an ARM-based 7-watt chipset,” Panay said. While ARM-based laptops PCWorld has tested so far have been lackluster, Panay claimed “three times more performance per watt than then Surface Pro 6,” as well as over 2 teraflops of power from the custom GPU. With all this, Panay promised battery life would not suffer.

The Surface Pro X is the start of something new for Microsoft and for ARM-based PCs. For Microsoft, it’s the promise of an ultraportable Windows tablet with no compromise. And if this chip is as good as Microsoft says it is, it could finally make ARM an intriguing alternative to Intel for ultraportable computers.