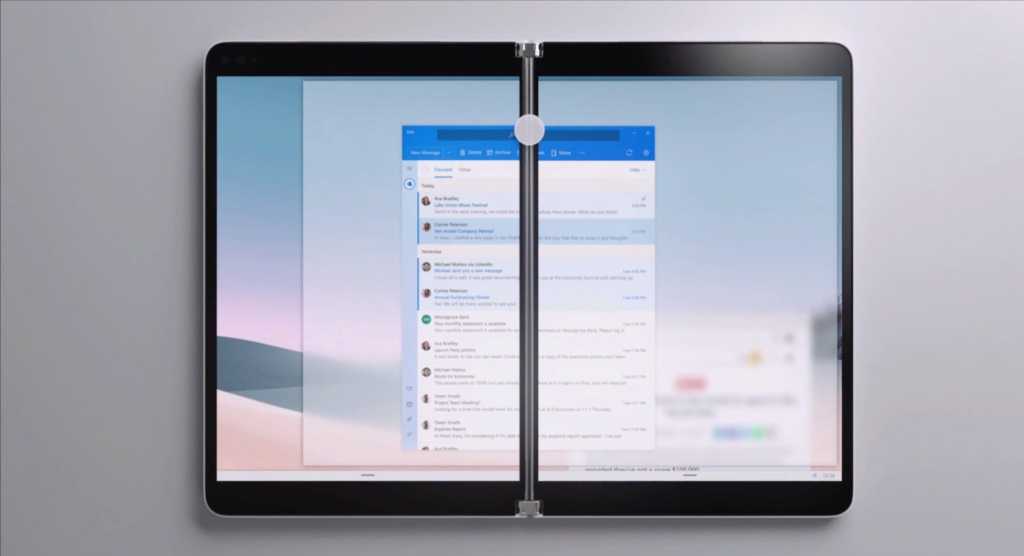 With Microsoft’s Surface Neo, the company looks ahead to a future that’s foldable. At its Surface event in New York on Wednesday, Microsoft unveiled a prototype Surface Neo that will feature a next-gen Lakefield CPU, the thinnest LCD ever made, and a new vision for mobile productivity. It won’t actually ship until late next year, but what Microsoft showed gives all the other companies trying folding devices a lot to think about.

The Surface Neo features two opposing screens that fold on a geared 360-degree hinge. That hinge allows the Neo to be used as a large tablet, as a book-shaped reader, or as a small tablet when the screens are folded back-to-back.

Microsoft knows productivity matters whatever the mode, so it’s cleverly designed a magnetic wireless keyboard that attaches to the back of the screen or sits on top of one of the screens, so the Neo can be used like a traditional clamshell device.

A new version of Windows that will ship with the laptop, called Windows 10X, makes the keyboard even more versatile by adjusting features based on its location. If the keyboard is pushed toward the hinge, Windows will automatically configure the screen so the uncovered portion functions as a trackpad.

If the keyboard is attached near the front edge, the OS reconfigures the screen to create a large touch area that Microsoft calls “Wonder Bar.” Think of Apple’s dismal Touch Bar, but perhaps more useful and with more support. In one demonstration, Microsoft showed the Surface Neo automatically docking a Netflix video to the Wonder Bar, keeping the main screen clear for productivity tasks.

As a Surface there is, of course, pen support. The pen appears to be same flat, wireless charging Slim pen as the one that comes with the new Surface Pro X. Microsoft didn’t say whether the pen charges in its storage position on the tablet’s back (see below), but we hope it does.

The Neo offers a large tablet surface (albeit with a bezel splitting it), a small tablet mode, a book mode, and two different clamshell modes. As the keyboard is wireless, you can detach it and set the screen on a table to use both screens.

It’s not clear how the tablet would stand on its own. Sure, you can fold the screen a little so it stands straight up and down, but that’s not exactly an optimal way to use it. You can see just how awkward this mode would be below.

Microsoft has a year to figure out this last mode, because the Surface Neo won’t be released until the end of 2020, coincident with the Windows 10X OS that’s optimized for the Surface Neo. Microsoft did not discuss pricing at this early reveal.