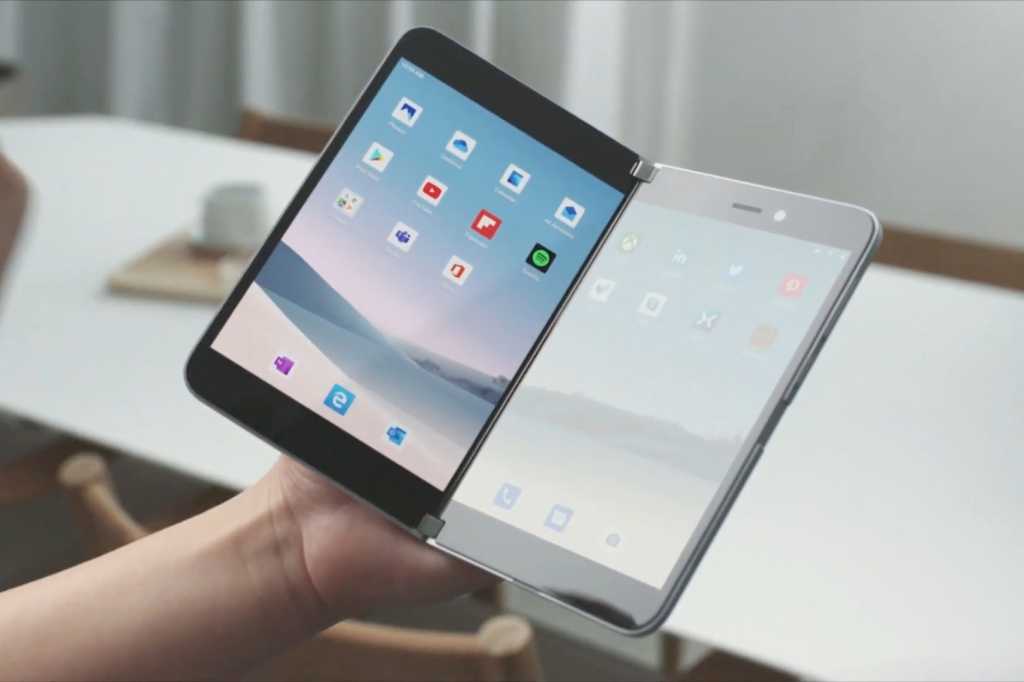 Microsoft’s Surface Duo shocked the tech world this morning. Everything else the company revealed at its event Wednesday in New York was foretold in leaks over the last few days, but not this dual-screen smartphone, the company’s first foray into mobile since the long, agonizing death of Windows Phone. This time, however, Microsoft is partnering with Google to run the phone on a special version of Android, guaranteeing no app gap.

The Android world already has Samsung’s Galaxy Fold, and the Surface Duo works similarly, opening like a book. Microsoft’s version reveals not a bendable OLED display, however, but rather two 5.6-inch displays mounted side by side. Like its newborn cousin the Surface Neo, there’s a very visible hinge in the middle of the Surface Duo. Considering the torrent of troubles Samsung’s had with its Galaxy Fold screen, that’s probably the wisest choice. The use of two discrete displays also allows the device to be used in “adaptable postures” depending on the situation.

Most notably, the Surface Duo doesn’t run Windows like Microsoft’s previous handset—it runs Android. Microsoft executive Panos Panay didn’t get into specifics as to how skinned the version of Android will be, but from the looks of it, it’s quite different from the current Android 10. He said the company was working closely with Google on the device, and that it will marry “the absolute best of Microsoft with the absolute best of Android.”

Surface outside, Android inside

It starts with the design, which is basically a smaller version of the Surface Neo tablet. When closed, it looks like a tiny laptop that may, of course, open into clamshell mode or fold flat to be used as a tablet. While the Surface Duo doesn’t technically have a separate outside screen as the Galaxy Fold does, the 360-degree hinge lets you flip the two inside screens to the outside. It resembles the XTE Axon M, but the Surface Duo is a much more elegant device.

Microsoft didn’t share dimensions of the device, but both screens have large bezels all around, with lots of space above and below the screens. Furthermore, the Surface Duo appears to have a 4:3 display rather than a 16:9 one, which would make it wider than most smartphones.  Specifically, Panay called out that the Surface Duo will “fit in your bag,” which could be a sly way of noting it’s not a pocket device.

When opened, the Surface Duo is an 11-inch tablet with a seam down the middle. It can be used as a single screen, but its main purpose—like the Surface Neo—is for dual-screen multitasking. Not only will it enable split-screen apps and drag-and-drop capabilities, it will also seamlessly integrate with other Surface PCs via a built-in and beefed-up version of Continue on PC. That’s the main appeal of the device, as Panay described, “not just because of the hardware but how productive you can be on it.”

While we have a lot of questions—camera, chip, battery life, carrier support, and price—the Surface Duo is undoubtedly exciting. As Android phones and iPhones are struggling to figure out the next big thing, the Surface Duo is a new category of device with, as Panay said, “a unique design ethos that Surface brings with every single app in the Android ecosystem.”

However, we’re going to have to wait a while to get it. Microsoft says the Surface Duo won’t ship until holiday 2020, more than a year away. By that point, the Galaxy S11, iPhone 12, and Pixel 5 will all be here, so Microsoft will certainly have its work cut out for it. But if you’re in the market for a new phone, you might want to hold off just a little longer.