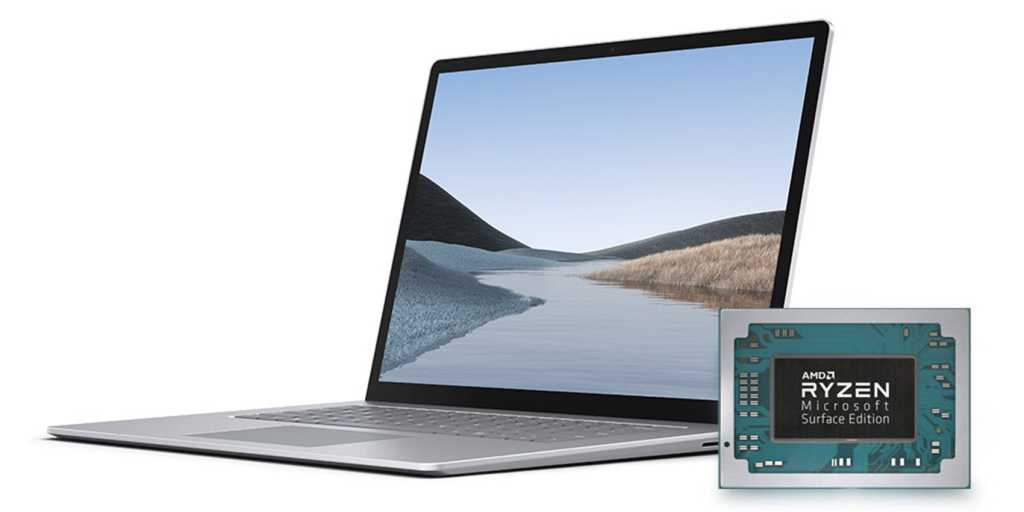 When Microsoft announced that a custom Ryzen Surface Edition processor with Radeon Vega graphics would be the basis of its new 15-inch Surface Laptop 3, AMD’s low-key presence in laptops got a ginormous boost.

If you were hoping that Microsoft somehow squeezed AMD hard enough to get a mobile version of its 7nm Zen 2 cores for Surface, that didn’t happen. Despite its 3000-series model number, the chip is based on AMD’s previous Zen+ cores. AMD’s Jack Huynh confirmed it in a blog post talking about the collaboration. Huynh also said the chip will boost up to 4GHz.

That’s the same boost as AMD’s leading low-power-consumption Ryzen 7 3700U, which can boost to 4GHz but has a slightly lower graphics count with its Radeon RX Vega 10.

Huynh said in his blog post that one of the key features in the Surface Edition chip is better responsiveness. “We challenged ourselves to improve Smart Performance Shift with enhanced highly tuned predictive algorithms that adapt to the end-user workload on-demand, delivering a perfect balance of battery life and peak performance under virtually any situation,” Huyhn wrote.

Microsoft and AMD also closely worked to optimize the pen support. AMD said the Surface Laptop 15 features a “on-die pen controller,” with the pen taking 200 measurements per second. Many other optimizations are detailed in the blog.

To prove that the new 15-inch Surface Laptop 3 is the “fastest 15-inch laptop you can buy,” AMD and Microsoft put it up against Intel chips in UL’s FutureMark Time Spy test. To see how it stacks up, we took AMD’s numbers and compared them to our own numbers from a press preview of Intel’s 10th-gen chip.

In the chart above, the red bar represents the AMD-furnished results. The longer blue bars show Intel’s new Iris Plus graphics in its 10th-gen 10nm chips, while the shorter blue bars are typical of Intel’s older UHD graphics laptops. The two green bars indicate the performance of Nvidia’s 10-watt and 25-watt MX150 discrete graphics chips. As a single-chip solution, AMD’s Ryzen 7 is definitely a step above Intel’s best and in the ball game with Nvidia’s low-power discrete parts.

To be fair to Intel and Nvidia, one thing we should point out is the size difference. Although reasonably light at 3.4 pounds, the Surface Laptop 3 is considerably larger and heavier than most 13.3-inch laptops. The extra mass and volume means more room for cooling, and more room for batteries too. While the new 15-inch Surface Laptop 3 will likely outperform many 13.3-inch laptops in graphics, it’s also awfully close to laptops with 6-core and 8-core parts, and better graphics, too.

Battery life may prove to be another bright spot for the Ryzen-based Surface Laptop 3. Microsoft lists 11.5 hours of run time, with the screen set at 150 nits of brightness in a general web browsing test using Edge. Although battery life is much improved over previous generations of Ryzen mobile chips, it’s still a bit of a soft spot for AMD.

An interesting twist to the battery claim is the presence of an Intel-based version of this very same machine. Microsoft quietly noted that while the consumer 15-inch Surface Laptop 3 will be AMD, a commercial version will use Intel’s 10th-gen, 10nm Ice Lake CPUs. Because Microsoft doesn’t break out different battery life for each version, it’s possible the Intel and AMD versions will have the same battery life.

It’s all speculation until we get actual hands-on time with the Ryzen-based Surface Laptop 3. But no matter what, this is a huge win for AMD mobile processors and could pave the way for other vendors to integrate AMD into their flagship laptops.