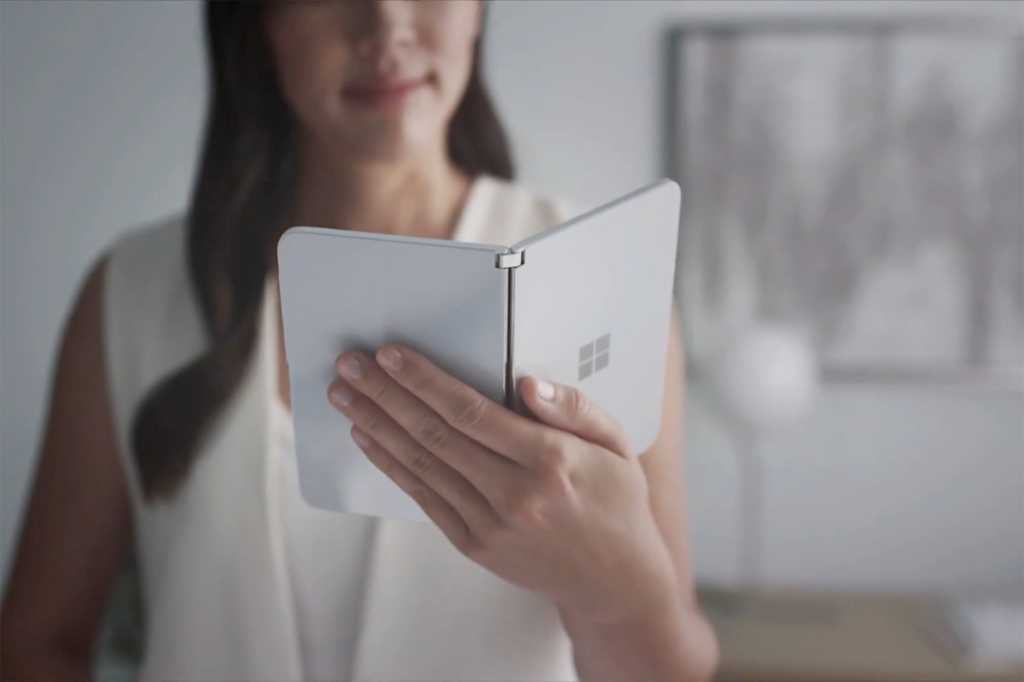 Look out Samsung Galaxy S11, iPhone 12, and Google Pixel 5: There’s a new kid in town—or at least there will be, by the time all of those phones launch in 2020. Microsoft on Wednesday gave us a sneak peek of the Surface Duo, its first smartphone since the ill-fated Windows Phone, and it’s definitely unique.

Something of a cross between a laptop and a Galaxy Fold, the Surface Duo is a device with more questions than answers. What we know for sure is that it runs Android and needs to be opened like a laptop to be used, but there are so many more things we need to know before it goes on sale late next year, like:

What’s the resolution of the Surface Duo displays?

The centerpiece of the Surface Duo is obviously the dual display. Microsoft revealed that the phone uses a pair of 5.6-inch screens. But that’s all we know about them. Are they 2K resolution like the Surface Pro X or Quad HD like the Galaxy Note 10+? Are they OLED or PixelSense IGZO screens? Are they 60Hz or 90Hz? Can you watch a movie full-screen and have it span across the hinge? Smartphone display tech has advanced in leaps and bounds since the days of the Windows Phone, so the Surface Duo needs to start with a killer screen.

What kind of processor will it use?

In its exclusive look at the Surface Duo, Wired noted that the unit it saw was powered by a Snapdragon 855 processor, the same found in today’s premium Android phones. That’s going to be outdated by next year, so clearly it’s just a stop-gap. But will it simply run the Snapdragon 865 (or whatever the latest chip Qualcomm releases is called)? Or will it follow the Surface Pro X and use a custom chip? Microsoft’s custom silicon would go a long way toward separating the Surface Duo from the pack, so the fact that Microsoft didn’t say either way during its reveal is intriguing.

How much storage and RAM is inside it?

Today’s phones can pack half a terabyte of storage and 12GB of RAM at the high end, and Microsoft clearly wants the Surface Duo to be a work-first device. A base model of 8GB RAM/128GB storage like the Surface Pro X seems likely, but we want to know what the maxed-out version is. We’ll take 16GB and at least 512GB, please.

Will it have a headphone jack?

We haven’t gotten a full 360-degree look at the Surface Duo yet, but from the pictures we’ve seen, we’ve yet to spot a headphone jack anywhere on the device. That’s not surprising—the Surface Pro X doesn’t have one, and the wireless Surface Earbuds just landed—but we’d still like to know for sure.

What’s the quality of the camera?

According to the pics we’ve seen as well as Wired’s report, the Surface Duo doesn’t have a rear camera. Rather, the selfie camera and the main camera are one and the same. But we don’t know anything about it. Will the final shipping product stick with a single camera or upgrade to a dual or triple array? Will it provide Windows Hello facial recognition? Can you take slowfies like on the iPhone? Obviously a tablet-quality camera won’t cut it here, so we’re very interested to see what the Surface Duo delivers.

2020 is shaping up to be the year of 5G, with a new integrated Qualcomm modem, greater expansion of networks, and maybe even a 5G iPhone. So if the Surface Duo arrives without it, it could be a damper on an otherwise good phone.

Here’s the million-dollar question. With two screens to power, the Surface Duo is going to need some serious juice to keep running all day. We don’t know what kind of battery is powering Microsoft’s new phone. Samsung’s Galaxy Fold has set the battery benchmark for folding phones at better than 12 hours of actual use, so the Duo has its work cut out for it.

What kind of an Android skin does it have?

The most surprising thing about the Surface Duo—other than its very existence—is the OS it runs: Android, not Windows Mobile. But what flavor of Android will it run? It’s not coming out until next year, so presumably it will have Android 11 on board, but what kind of launcher will it have? And most importantly, will updates arrive on time? With the other Surface devices, Microsoft controls the whole stack. Android support adds an extra layer that has been known to delay things.

Microsoft is promising support for the whole Play Store app library, but we didn’t see a much about games. With a clamshell design and two screens, the Surface Duo could be the device that truly takes Android gaming to the next level, with split-screen action, unique controls, and unique gameplay.

How much does it cost?

Of course, this is what we really need to know. The Galaxy Fold starts at $1,980 and the Surface Pro X clocks in at $999. So maybe in the middle? Time will tell, but the price could be the thing that makes or breaks the Surface Duo.