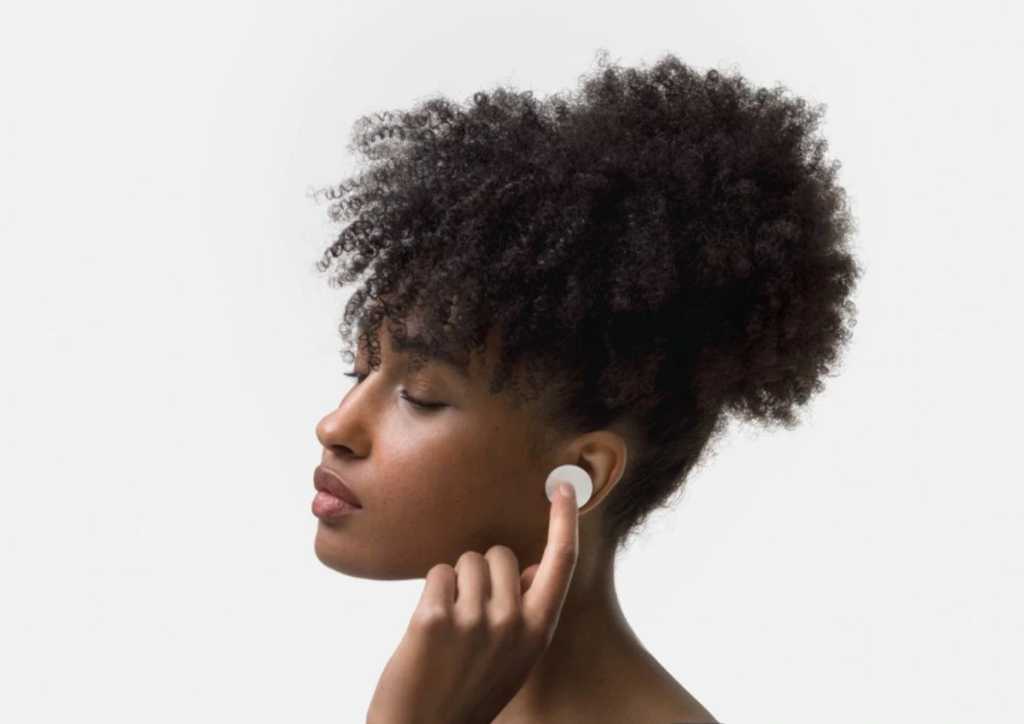 That’s not a slight against Microsoft. The Headphones offered powerful, selective noise-canceling technologies, but Microsoft positioned them as a Cortana accessory. When Cortana was de-emphasized, down went the Headphones. With the Earbuds, Cortana appears just once on the Earbuds’ one-page product sheet. Instead, the secret sauce is its cloud transcription capabilities, plus what Microsoft is touting as a superior audio solution for apps like Spotify.

At $249Remove non-product link, the Surface Earbuds are $50 more than the Apple AirPods—which will inevitably be seen as a competitor even if Microsoft’s earbuds do much more. Microsoft may also have a shot at putting a Cortana-powered earbud on the market before Amazon launches the Amazon Echo BudsRemove non-product link at the end of the month for $129.99.

Here are the Surface Earbuds in short: They’re 7.2 grams apiece, measuring just under an inch by 0.75 inches. Inside is a 13.6mm driver, good for 20Hz to 20kHz of frequency response. The Earbuds can process both aptX and the SBC audio codecs. They’ll work with Android 4.4 and above, Windows 10, iOS9, and Bluetooth 4.1/4.2. They’re “waterproof,” with an IPX4 rating that means that they can withstand water being sprayed on them for five minutes. The Earbuds are good for 24 hours of charging via the charging case: 8 hours per charge, with two “refills” from the case.

Viewed on someone else, the Surface Earbuds remind me of ear gauges, the polarizing ear jewelry that can be attractive to some and disturbing to others. Microsoft’s Surface Earbuds don’t fit tightly in the ear—and that’s a good thing, in my opinion—instead resting lightly in the ear canal so that you can hear other ambient noise around you. The white discs are in fact control surfaces, which you swipe and tap to execute actions through your Earbuds.

I detest in-ear earbuds, because my ear canals either fail to hold the earbuds securely, or they get jammed in so uncomfortably that I quickly remove them. Microsoft provides three sets of silicon tips to fit your ears. The medium-sized tips fit me snugly and comfortably after a bit of adjustment.

Microsoft provided guided demos of the Earbuds. When it came to be my turn, I tried on the earbuds, which I was told were controlled by the outer surfaces. A double tap paused and restarted the music being played by the Spotify app, while the volume was controlled by a swipe up and down. Taps weren’t always recognized, but the swipes worked fine, prudently sliding the volume levels up and down a few notches at a time.

Microsoft describes the Earbuds’ sound quality as the product of a “Surface Omnisonic sound profile with custom-designed drivers and precision tuning inspired by listening to the world’s best live music venues and most advanced audio equipment, delivering an audio experience that’s rich, immersive and crystal clear.” In the crowded venue the audio sounded rich and strong, but not necessarily “immersive and crystal clear.” I’d probably need exposure in a mellower venue to appreciate them fully.

Microsoft’s Surface Earbuds also include the capability to integrate with Office 365 and Cortana, using a prolonged touch and hold. Each earbud has two microphones, and they clearly understood what I was trying to say when I asked Cortana a couple of sample queries.

Transcription is where the Earbuds shine. Dictation is built into Word—but it’s lousy, and works off of local voice models that you have to train. We’re learning that a cloud model—a massive corpus of information hosted by Google or Microsoft or Amazon—works much more efficiently. When I tried a few sentences, the Earbuds correctly transcribed what I was saying in a crowded room, even with a hoarse voice and against a noisy background. I was told that the Earbuds can also translate your speech into several languages.

Cool? Yes. But at $249, I’d have to seriously consider whether I needed a personal assistant living in my ear. I really liked the Surface Headphones, and the Surface Earbuds certainly offer the potential to enhance productivity through oral dictation. Will they complement your phone, PC, and smart speaker, though? Those are the questions that a review will have to answer.