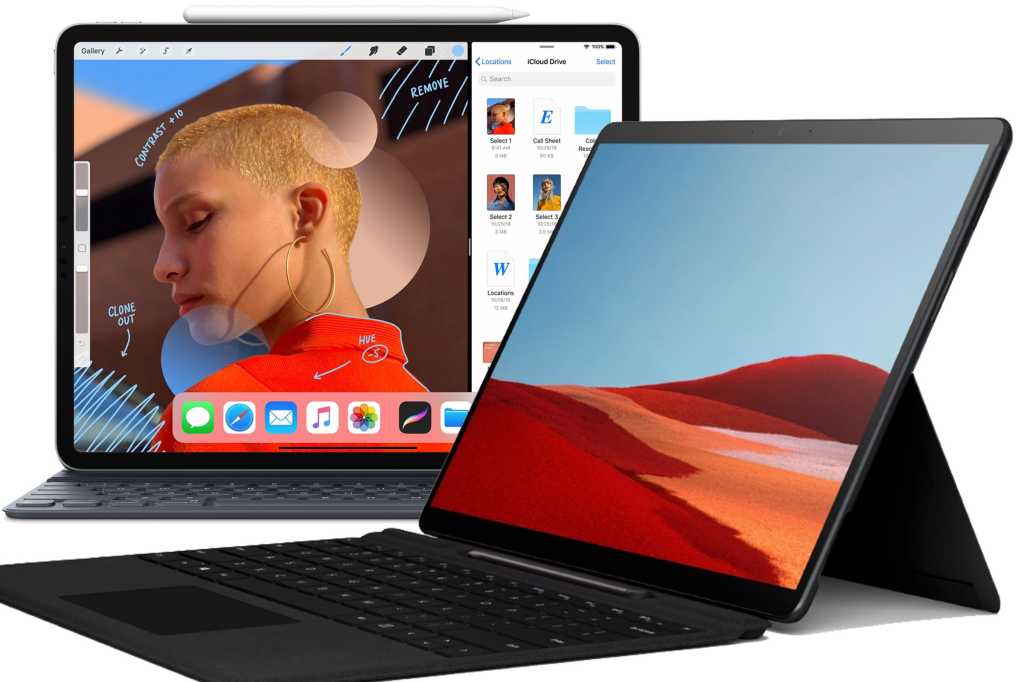 In the world of ultraportable 2-in-1 tablets that can work as hard as they play, there are but two options: the iPad Pro and the Surface Pro. And on October 2, Microsoft unveiled not just a refreshed Surface Pro 7, but the brand-new Surface Pro X (available from microsoft.com), an always-on, always-connected tablet that seems solely designed to take on the 12.9-inch iPad Pro (available from apple.com). So let’s dive in and see how these two tablets stack up.

Update 2:35: This article has been updated to clarify that the Surface Pro X will run 32-bit Windows apps but not 64-bit ones.

With either the Surface Pro X or the iPad Pro, you’re getting a modern tablet with a giant display surrounded by slim bezels, all packed in a thin, lightweight frame:

While the Surface Pro X technically has slimmer side bezels, the top and bottom bezels are wider. The iPad Pro’s bezels, on the other hand, are uniformly spaced around the screen, giving the package more balance and symmetry than the Surface Pro X’s.

The iPad Pro has slightly flatter edges, while the Surface Pro X’s edges have a bit of a curve to them.

Around the back, both sport a single camera lens (the Surface Pro X’s is centered, while the iPad Pro’s is in the top left corner). And of course, the Surface includes its trademark kickstand that blends into the bottom half of the tablet when not in use. Winner: iPad Pro

Both tablets sport a 3:2 display ratio rather than 16:9. The Surface Pro X’s 13-inch display is ever so slightly bigger than the iPad Pro’s 12.9-inch. Resolution-wise, the two displays are very similar as well:

However, the difference between them is greater than a few pixels and a tenth of an inch. For one, the iPad’s display has rounded corners that match the device and give the bezels and the screen a seamless flow. It also features two distinctive Apple technologies: True Tone, which adapts the dsplay’s color temperature based on ambient light, and ProMotion, which can adjust the refresh rate up to 120Hz to be more responsive to touch or stylus input.

The Surface Pro X uses Microsoft’s PixelSense display, which also adapts to lighting, but has a standard 60Hz refresh rate.

Both displays feature a P3 wide-color gamut, but the iPad is significantly brighter at 600 nits versus the Surface’s 450 nits. Winner: iPad Pro

While previous (and current) Surfaces all use Intel processors, the Surface Pro X is a different animal. Instead of Intel inside, it has the SQ1, a custom Snapdragon 8cx-based processor that Microsoft co-designed with Qualcomm. The 3GHz SQ1 has 8 cores and 2 teraflops of graphics power, and is based on ARM, which could cause issues with some Windows apps. Qualcomm has released some preliminary benchmarks on the Snapdragon 8cx but the SQ1 variant is unknown and untested, so we have no clue how it stacks up to its peers.

The iPad Pro also runs an ARM-based processor, called the A12 Bionic. It’s a generation behind the newer A13 in the iPhone 11, but it’s still plenty capable, with a 64-bit ARMv8 octa-core CPU and a dedicated neural engine that runs five trillion operations per second. So the SQ1 certainly has its work cut out for it

When it comes to storage, the Surface Pro X model starts at 128GB, twice as much as the iPad Pro base model. Both offer 256GB and 512GB options, while the iPad Pro goes all the way up to 1TB.

However, you can actually swap out the drive on the Surface Pro X for a different one. While Microsoft doesn’t recommend doing it yourself and instead suggests you consult “a skilled technician following Microsoft provided instructions,” it’s an option that isn’t available with the iPad. Winner: Surface Pro X

The very short list of ports on both the Surface Pro X and the iPad Pro tell their own story:

USB-C is your only choice for connecting peripherals other than the respective keyboards. You can forget about the headphone jack on both as well. You’ll need either a dongle, or Bluetooth headphones, or USB-C.

Notably, the Surface Pro X doesn’t use its USB-C port for charging. While a USB-C charger will presumably fill up your tablet if you plug one in, you’ll still need to carry the Surface Connector for reliable power. Winner: Surface Pro X

Tablets this big aren’t known for their photo-taking expertise, and if you’ve ever seen someone try to take a pic with a 13-inch tablet, you can see why. So both have acceptable, but relatively pedestrian rear cameras:

While the iPad’s sensor is technically superior, you probably won’t be using either one to take pictures or videos, even if you do have hands large enough to handle it. Winner: iPad Pro

The front cameras are far more useful, and not just for taking selfies. While the specs are mediocre—5MP on the Surface and 7MP on the iPad Pro—both tablets use their front cameras for 3D facial scanning. On the Surface  Pro Xit’s called Windows Hello, while Apple called it Face ID on the iPad, but they’re basically the same, using an IR blaster and a camera to create a 3D model of your face that is authenticated each time you unlock your device or access a site with a password. It’s fast, it’s easy and, most importantly, it’s even more secure than a fingerprint sensor. Winner: Tie

While neither company likes to tell us what size battery is inside their tablets, we know from teardowns that the iPad Pro’s is 9,720mAh, which Apple estimates will get you up to 10 hours of “surfing the web on Wi-Fi, watching video, or listening to music.” In our testing, we’ve found that Apple’s battery estimates are pretty spot-on, if not a little conservative.

Microsoft says the Surface Pro X will get 13 hours with “typical device usage,” but those estimates are based on 150-nit brightness, which is probably lower than most people will set their screens (we run our tests at 200 nits’ brightness). So it remains to be seen whether the Surface Pro X can last longer than the iPad Pro. Winner: TBD

The differences between Microsoft’s and Apple’s respective OSes are well documented when it comes to PCs, but the distance between them is even greater when it comes to tablets. That’s because Surface devices run Windows 10, while the iPad runs iOS (which is branded iPad OS as of the latest release).

However, now that the Surface Pro X uses an ARM processor, some old Windows apps aren’t going to work. While 32-bit app will run just fine, developers who run 64-bit apps are going to need to retool them for the new architecture, and that’s going to take time. For example, Adobe has announced that it will be bringing its Creative Cloud apps to the Surface Pro X “as soon as possible,” beginning with the Fresno drawing app that recently landed on the iPad platform. Obviously, Microsoft’s Office 365 Suite will be fully optimized and ready to roll, as will many other, including Chrome and Firefox.

But while the iPad Pro may have more apps at the start, the potential is far greater for the Surface Pro X. With the full version of Windows at its disposal, the Surface will only get better and more powerful—assuming developers sign on to support it. So for now, the iPad Pro has the edge, but that could change quickly. Winner: iPad Pro

Because these are both classified as 2-in-1 devices, they each have accessories that turn them into pseudo-laptops. Apple’s Smart Keyboard for the iPad Pro will set you back $199. Microsoft sells a regular Surface Pro X Keyboard for $140. The Surface Pro X Signature keyboard, which has a special charging dock for the Slim Pen, sells in a bundle with the Slim Pen for $270. However, both of Microsoft’s Surface Pro X keyboards include a trackpad for controlling a cursor, while the iPad Pro’s relies solely on touch, even with the keyboard attached.

The styli have other differences. The Surface Slim Pen has some neat Office control tricks built in, while the Apple Pencil is more of a drawing tool. Apple’s second-generation Pencil offers magnetic charging and storage on the iPad itself, and it costs $129. The Surface Slim Pen, which is available separately for $145, can charge via USB-C with an included charging base, or charge wirelessly when nested in the Surface Pro X Signature Keyboard.

The 12.9-inch iPad Pro is available now from apple.com. The Surface Pro X preorder page on Microsoft.com is already up, with a scheduled November shipping window.. As you might have guessed, these tablets aren’t cheap. You’re looking at four figures no matter which model you buy, and possibly a whole lot more–and remember, these prices do not include the keyboard or pen accessories:

While they may look very comparable, the Surface Pro X includes LTE connectivity on its price, while Apple charges an extra $150 on top of the above prices. That means the Surface shines at the low end, but the high-end iPad is $1,699, $100 less than the Surface and with twice as much storage.

Ultimately, the choice between these two tablets comes down to OS preference, but all things being equal, the iPad Pro gets the edge for one reason: We know what we’re getting. With a new ARM processor, the Surface Pro X can’t be judged on the strength of its predecessors, so we’ll need to run a barrage of tests to see if it’s as good as Microsoft says it is. But if you need a tablet right now, go get a 12.9-inch iPad Pro. After all, you can always sell it later.